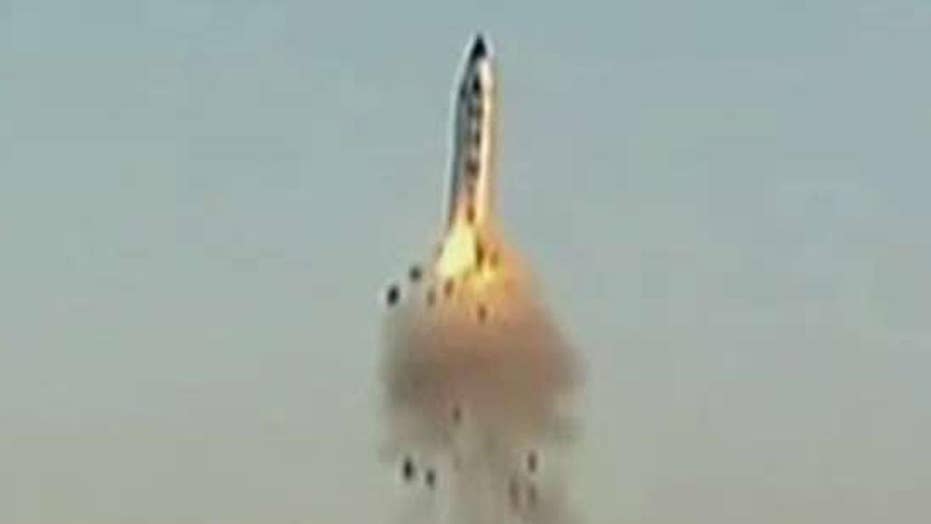 North Korea attempted to launch an intermediate-range Musudan missile, the first attempted launch of this type of missile since President Trump took office.

"The missile blew up five seconds after launch," said one official, who had seen satellite imagery of the launch showing a heavily damaged mobile launcher on a runway.  The test occurred at an air base near the city of Wonsan on North Korea's east coast along the Sea of Japan.

South Korea's Defense Ministry said it also believes the launch ended in failure. It said it was analyzing what type of missile was launched.

The reported launch failure comes as the North has angrily reacted to ongoing annual U.S.-South Korean military drills that it views as an invasion rehearsal. Earlier this month, North Korea fired four ballistic missiles that landed in waters off Japan, triggering strong protests from Seoul and Tokyo.

Wednesday’s failure might mean that the missile is a newly developed one the North has not deployed, according to South Korean media. Last year, the country suffered a series of embarrassing failed launches of its new medium-range Musudan missile before it successfully test-fired one.

The United States often sends powerful warplanes in times of heightened tensions on the Korean Peninsula, which remains in a technical state of war because the 1950-53 Korean War ended with an armistice, not a peace treaty. About 28,500 U.S. soldiers are deployed in South Korea.

North Korea is pushing hard to upgrade its weapons systems to cope with what it calls U.S. hostility. Many weapons experts say the North could have a functioning nuclear-tipped missile capable of reaching the continental U.S. within a few years. North Korea carried out two nuclear tests last year.

On Sunday, North Korea claimed it conducted a successful ground test of an engine capable of being used on a long-range missile.

On a visit to South Korea last week, Secretary of State Rex Tillerson said the Obama-era policy of "strategic patience" was over and called the past 20 years of negotiating with the rogue communist regime a failure.

In an interview with Fox News's Rich Edson along the DMZ separating North and South Korea, Tillerson would not rule out helping Asian allies Japan and South Korea get nuclear weapons.

North Korea last conducted a test of a Musudan missile in October, which also ended in failure. A June test was deemed successful after the missile flew 250 miles into the Sea of Japan, which separates North Korea from Japan.

While North Korea has not successfully conducted a test of an intercontinental ballistic missile (ICBM) capable of hitting the United States, Pentagon officials believe the communist regime could soon have that capability.