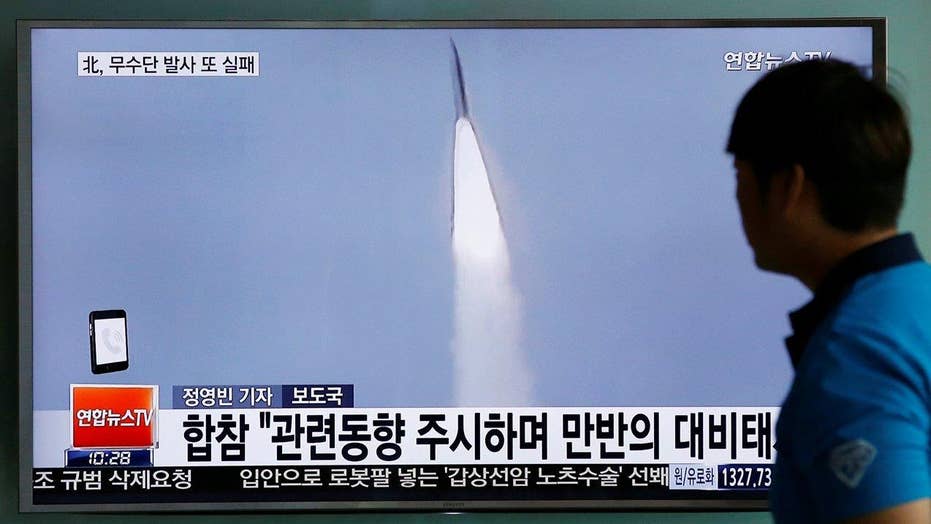 In the latest embarrassment for the communist nation of North Korea, a ballistic missile thought to have a range of 2,500 miles failed to launch early Monday morning, Pentagon officials confirmed to Fox News.

The medium-range Musudan blew up shortly after takeoff in the eastern coastal town of Wonsan, according to officials briefed on the latest intelligence. The missile had the potential to hit U.S. military bases as far away as Guam.

"They are 0-4" one official said describing North Korea's most recent missile launch attempts. The failures could help calm recent fears that the North was pushing quickly toward its goal of a nuclear-tipped missile capable of reaching the United States.

The missile exploded at a mobile launch pad as soon as the launch button was pressed, an unidentified government source told South Korea's Yonhap news agency.

Despite the recent failures, there have been growing worries about North Korea's nuclear and missile activities this year, which include a nuclear test in January and a rocket launch in February that outsiders saw as a test of banned long-range missile technology.

North Korean dictator Kim Jong Un issued an order in March that tests be conducted of a nuclear warhead and ballistic missiles capable of carrying such warheads. The order was thought to be part of North Korea's response to annual South Korea-U.S. military drills that it sees as a rehearsal for an invasion.

"I think they keep firing (Musudans) because they've continuously failed" in previous launches, said Lim Eul Chul, a North Korea expert at South Korea's Kyungnam University. "They'll continue to make efforts to upgrade (Musudan's) capability to a level that can satisfy their leader."

South Korea has dismissed as "propaganda" repeated overtures by North Korea for talks, which some analysts see as an attempt by the North to win concessions from its rivals. South Korea's Foreign Ministry warned Tuesday that North Korea will face stronger sanctions if it doesn't stop provocations.

Lim said Tuesday's launch attempt shows that North Korea is openly pressing ahead with its vow to bolster its military strength, regardless of whether it is pushing for talks with South Korea. "For them, upgrading Musudan's capability is a different matter from seeking a dialogue with South Korea," he said.

Musudan missiles are thought to have a potential range of about 2,180 miles, which would put U.S. military bases in Guam within their striking distance. South Korea believes North Korea does not have a functional long-range missile capable of hitting the U.S. mainland, but that the North is working on that technology.

Before April, North Korea had never flight-tested a Musudan missile, although one was displayed during a military parade in 2010 in Pyongyang, its capital.