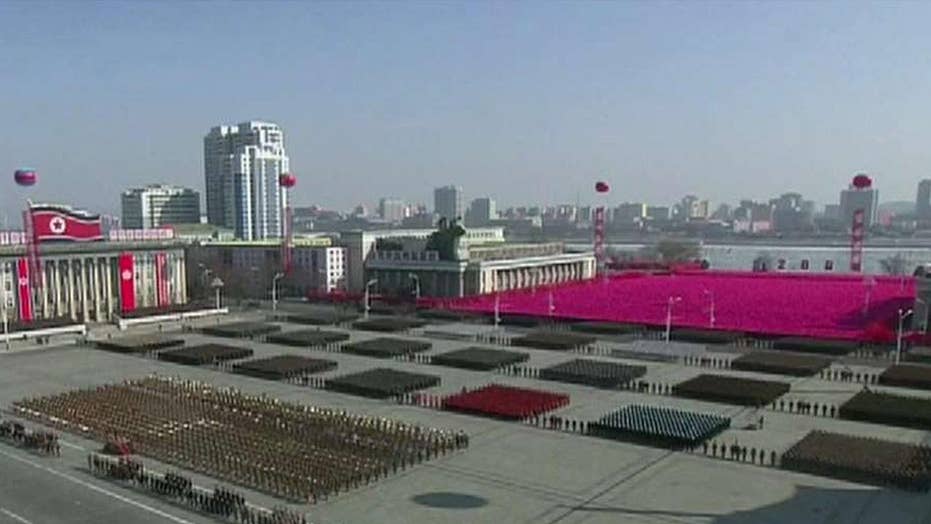 North Korea held a massive military parade on the eve of the opening ceremony for the PyeongChang Winter Olympics, displaying its intercontinental ballistic missiles before Kim Jong Un praised the regime as a “global military power” in a televised speech.

Kim, dressed in a long black winter coat, walked the red carpet with his wife Ri Sol Ju in Pyongyang’s Kim Il Sung Square at the beginning of the event. The parade featured thousands of goose-stepping troops lining up in the square to form words and slogans, armored vehicles, tanks and jets flying over the square that appeared in the number “70.”

NORTH KOREA NOT INTERESTED IN MEETING WITH VP PENCE: REPORT

Thousands of North Korean participants, dressed in red, white and yellow, stood in an arrangement to form the words “Kim Jong Un” in Korean. People also lined up to create the brush, hammer and sickle symbols that represent the ruling Workers’ Party.

But the main display came when launcher trucks rolled into the square with the Hwasong-14 and Hwasong-15 ICBMS — which the North claims can reach U.S. soil. The Hwasong-12 intermediate range missile also made an appearance.

South Korea’s defense officials said the parade was smaller than the one compared to last year, Yonhap News Agency reported.

Kim Jong Un and his wife Ri Sol Ju walked the red carpet at the start of the parade. (KRT via AP Photo)

The despot later took the stage and gave a speech, saying the parade marks the regime’s uprising as a "global military power" despite facing the "worst sanctions." He boasted about the North’s military as the “treasure sword” protecting the regime.

"We will have to prevent aggressors from attempting to infringe or ridicule our dignity and sovereignty even by 0.001 millimeter," Kim said in his speech.

"As long as imperialism remains on the Earth and as long as the United States' hostile policy on North Korea continues, the mission of our military, which is to protect our country and people and secure peace, can never change," he added.

Tanks and ICBMS were displayed during the parade (KRT)

Kim made no reference to the Olympics, despite the event being held on the eve of the opening ceremony. North Korea will be sending a delegation that includes athletes, a cheer squad, art troupe, journalists and officials to PyeongChang from Feb. 9-25.

Thursday’s parade also gave the public a rare glimpse of Kim’s inner circle, according to Yonhap. Aside from his wife, chief of the General Political Bureau Kim Jong-gak was standing next to the despot. Kim Yong-nam, who is the president of the Presidium of the Supreme People’s Assembly was also at the parade. He will be leading a high-level delegation, including Kim’s younger sister Kim Yo Jong, to the South Korea Olympics on Friday.

North Korea had said it would hold a big event to mark the 70th anniversary of the founding of its military. Feb. 8 has been seen as a less important founding anniversary but made something of a comeback in 2015 and was elevated further this year in part because it is the 70th — a nice round number.

North Koreans were later able to watch the parade when the state-run television broadcasted it hours after it was over.