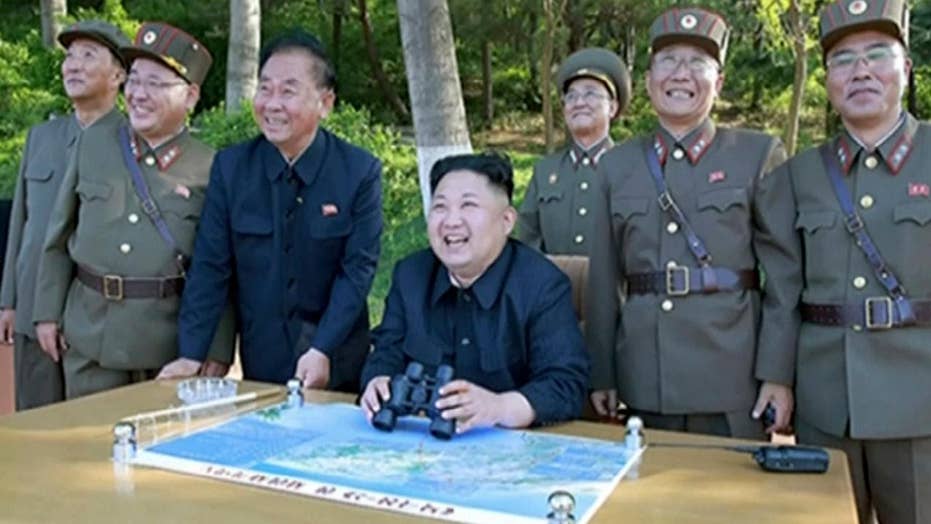 Griff Jenkins has the latest from Washington, D.C.

Tens of thousands of North Koreans gathered in a Pyongyang square Wednesday to cheer on their country’s dictator, hailing Kim Jong Un’s fiery rhetoric and saluting the tinpot tyrant’s nuclear lust – even as it inches the impoverished nation toward an apocalyptic confrontation with the United States.

A mammoth army of the country’s workers, dressed alike in white button-down shirts, and with many sporting matching red ties, raised banners lauding the North Korean military and raised their right fists in the air in a public gesture of solidarity with Kim Jong Un. The images of a united North Korea come with a caveat, however; the participants in the rally likely had little choice but to attend and cheer enthusiastically, as freedom of expression is a punishable offense in the autocratic regime.

The stunning rally comes amid escalating North Korean threats to attack the U.S. territory of Guam; Pyongyang’s continuing tests of intercontinental ballistic missiles; a Tuesday report that North Korea has miniaturized nuclear weapons; and President Trump’s own statement that additional North Korean threats would be met with “fire and fury.”

Images of the rally were released by North Korea’s state media organ, KCNA, the outlet which has also carried the country’s uniquely-worded statements dismissing Trump as “bereft of reason” and warning “only absolute force can work on him.” Pictures of the rally could not be immediately independently verified.

One of the large propaganda signs carried by protesters stretched nearly 20 people across and showed a trio of fierce North Korean military members, holding grenades and rifles, and seemingly ready for battle.

Other attendees, dressed in black, belonged to the country’s elite class, The Independent reported. They applauded the animated displays of the white shirt-wearing workers.