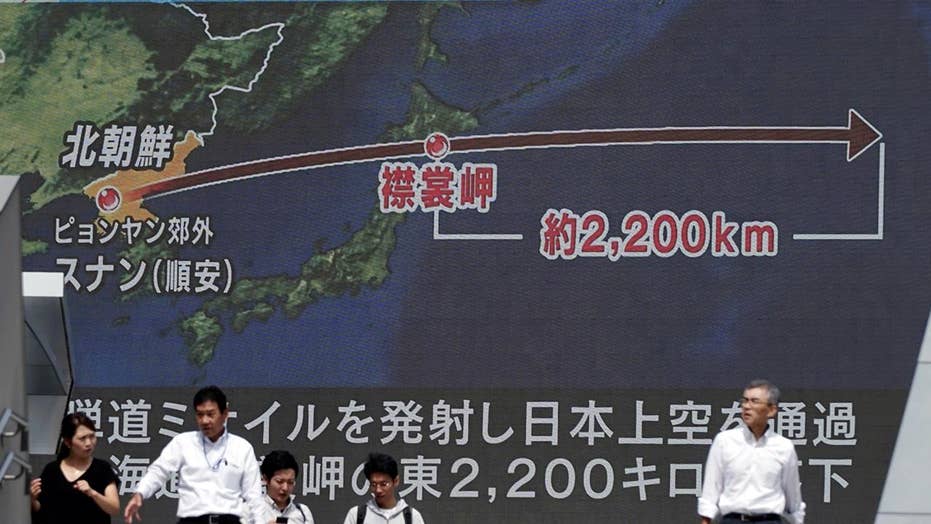 North Korea launched another missile Friday, the rogue nation's first missile launch since its massive nuclear test more than a week ago, prompting U.S. officials to issue a sharp round of condemnation.

The missile was launched eastward early Friday from Sunan, the site of Pyongyang's international airport. It flew over northern Japan before landing in the Pacific Ocean, according to U.S. Pacific Command.

President Donald Trump, who last month vowed "fire and fury" if North Korea ramped up its nuclear threats, didn't immediately comment. However, Defense Secretary Jim Mattis called the missile a reckless act by the North Koreans, adding that the missile "was fired over Japan and put millions of Japanese in duck and cover." Mattis said President Trump has been fully briefed on the missile.

Secretary of State Rex Tillerson said the latest round of sanctions from the United Nations Security Council "represent the floor, not the ceiling" of actions that need to be taken against North Korea.

"North Korea's provocative missile launch represents the second time the people of Japan, a treaty ally of the United States, have been directly threatened in recent weeks," Tillerson said. "These continued provocations only deepen North Korea's diplomatic and economic isolation. United Nations Security Council resolutions, including the most recent unanimous sanctions resolution, represent the floor, not the ceiling, of the actions we should take. We call on all nations to take new measures against the Kim regime."

The U.N. Security Council scheduled an emergency meeting for Friday afternoon, at the request of the U.S. and Japan.

In response to the test, South Korea launched a ballistic missile of its own to show it can reach North Korea's launch site.

NORTH KOREA THREATENS TO 'SINK' JAPAN, REDUCE US TO 'ASHES AND DARKNESS'

Last month, North Korea used the same airport to fire a Hwasong-12 intermediate range missile that flew over Japan, which the North declared as a "meaningful prelude" to containing the U.S. island territory of Guam, and the start of more ballistic missile launches targeting the Pacific Ocean.

U.S. officials said the missile launched Friday is what the Pentagon calls a KN-17. Its maximum range is estimated to be 2,800 miles.

The resolution bans the regime from importing all natural gas liquids and condensates, and caps Pyongyang’s imports of crude oil at the level of the last 12 months. It also limits the import of refined petroleum products to 2 million barrels per year.

The sanctions also ban all textile exports and prohibit all countries from authorizing new work permits for North Korean workers, both of which are sources of hard currency for the regime.

U.S. Ambassador to the U.N. Nikki Haley said that combined with previous sanctions, the U.N. has now banned 90 percent of North Korea's exports reported in 2016.

Ahead of the vote, North Korea vowed that the United States would face "pain and suffering" if any new sanctions were approved by the U.N.

“The forthcoming measures to be taken by [North Korea] will cause the U.S. the greatest pain and suffering it had ever gone through in its entire history,” North Korea’s Foreign Ministry said in a statement.

A stronger call for tougher sanctions against the regime came after the country recently claimed it detonated a hydrogen bomb.

The Sept. 3 test triggered an artificial magnitude 6.3 earthquake. According to a South Korean defense official, the test was estimated to have a yield of 100 kilotons, meaning a blast that was four to five times more powerful than the explosion in Nagasaki, Japan, in 1945.