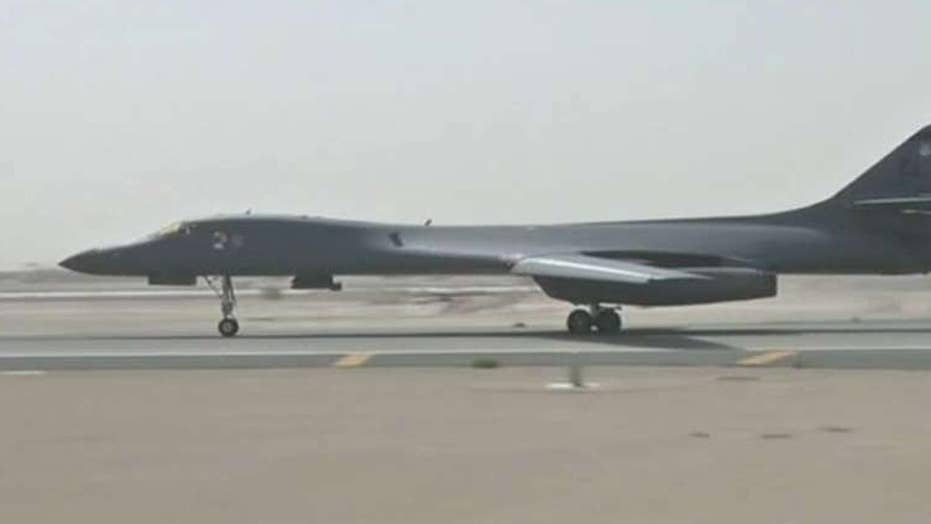 North Korean state media sharply criticized the U.S. on Sunday for a recent practice bombing run on the Korean peninsula, calling it a dangerous move raising the risk of nuclear war.

Sunday’s comments were reported in English by the state Korean Central News Agency; the news agency said that the recent drill increased the threat of a nuclear war.

The drill on Saturday was a show of force that came just days after North Korea conducted the first successful test of an intercontinental ballistic missile that can hit Alaska.

The two B-1 bombers flew 2,000 miles from Anderson Air Force Base in Guam to conduct a precision strike training exercise with South Korean fighter jets. The bombers were also joined by Japanese fighters during their flight.

The Air Force, in a statement, called the mission a "demonstration of the ironclad U.S. commitment to our allies."

The bombers, which can carry 84 500-pound bombs, fired releasing inert weapons at the Pilsung Range. The mission took 10 hours, according to the statement.

This undated photo distributed on Friday, June 9, 2017, by the North Korean government, shows a test of a new type of cruise missile launch at an undisclosed location in North Korea. I (Korean Central News Agency/Korea News Service via AP)

"North Korea's actions are a threat to our allies, partners and homeland," Gen. Terrence O' Shaughnessy, the Pacific Air Forces commander, said. "Let me be clear, if called upon we are trained, equipped and ready to unleash the full lethal capability of our allied air forces."

HOLDING NORTH KOREA AT BAY -- WHAT TRUMP NEEDS TO DO

Amid heightened tensions with North Korea, the U.S. will conduct a flight test of the Terminal High Altitude Area Defense (THAAD), an element of the nation’s ballistic missile defense system, Fox News has learned. The test, which will be conducted by the Missile Defense Agency (MDA), is scheduled to take place this month.

The Associated Press and Fox News' Lucas Tomlinson contributed to this report.