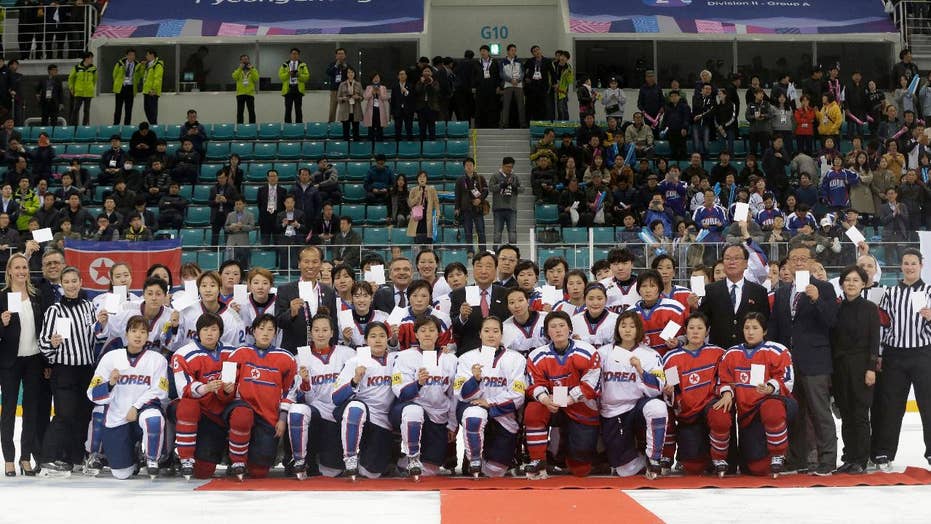 North and South Korea are forming a joint team for the Winter Olympics. Following a year of heightened tension over the North’s nuclear weapons program, the two countries are assembling a women's ice hockey team for the games in Pyeongchang.

North and South Korea are set to put aside their differences and march side-by-side in the Winter Olympics’ opening ceremony — forcing the South to give up waving its country’s flag — as the nations form their first joint Olympic team, Seoul announced Wednesday.

The delegations from the two Koreas will march under the unification flag — a blue silhouette of the peninsula placed on a white background — at the opening ceremonies in Pyeongchang on Feb. 9, Seoul’s Unification Ministry said. The agreement came after a joint meeting held at the border village of Panmunjom.

North and South Korea agreed to march together in the 2018 Winter Olympics' opening ceremony under the unification flag. (South Korea Unifiction Ministry)

In another milestone, the rival countries also agreed to field a single women’s ice hockey team. South Korean President Moon Jae-in earlier called the joint team “a historic event” that will move people around the world.

The International Olympic Committee, however, will have to first approve the joint team. The South Korean ministry said the two Koreas will be meeting with the IOC to discuss the agreements made in the last two weeks during the meetings.

The unification flag will be waved instead of the South Korea flag in the opening ceremony. (Reuters)

South Korea will be the first time the host country will not wave its own flag at the opening ceremony, according to Yonhap.

The upcoming Olympics will be the first one North Korea will be participating in that’s being hosted on South Korea soil, Yonhap reported. The regime boycotted the 1988 Summer Olympics in Seoul.

The last time teams from both countries marched together was in the 2007 Asian Winter Games in Changchun, China, according to Yonhap. The first time was at the 2000 Sydney Summer Olympics, followed by the 2004 Athens Summer Olympics and the 2006 Torino Winter Olympics.

North Korea will be traveling to the Olympics through a land route in the western part of the country, taking the road in Kaesong Industrial Complex that connects the two countries.

The regime's Olympic delegation will also include a 230-member cheerleading squad known as the “Army of Beauties,” a 140-member art troupe, officials, athletes, journalists and a taekwondo demonstration team.