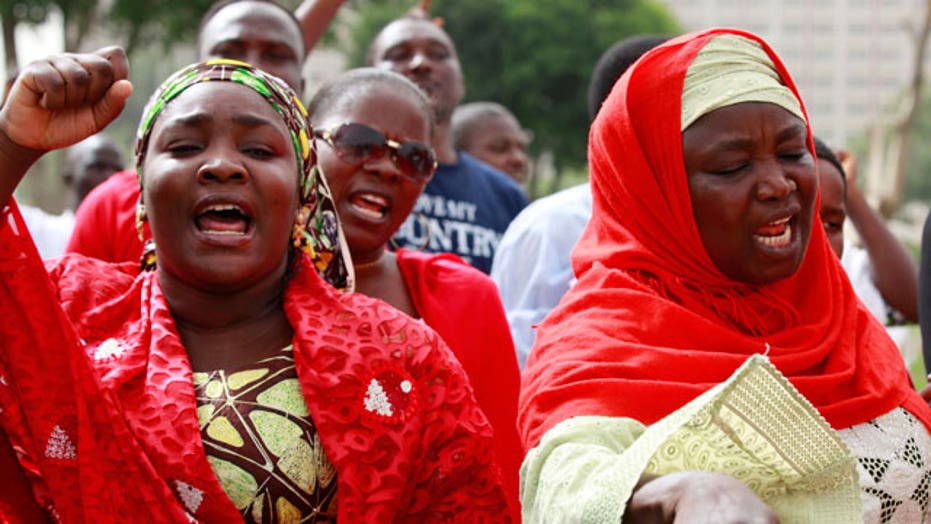 Nigeria said Monday it was weighing all options to secure the freedom of nearly 300 kidnapped schoolgirls, as their captors demanded the release of jailed militants and the U.S. deployed surveillance planes in hopes of finding the girls.

A Nigerian government statement said it would "continue to explore all options for the release and safe return of our girls back to their homes" after the release of a video by the Boko Haram terrorist network showing what it claimed were some of the schoolgirls kidnapped a month ago.

The video showed about 100 girls, indicating they may have been broken up into smaller groups as some reports have indicated. Fifty-three girls managed to escape and 276 remain missing, according to Nigerian authorities.

The U.S. has sent some 30 people drawn from the State and Defense departments. Among them are five State Department officials, two strategic communications experts, a civil security expert and a regional medical support officer. Four FBI officials with expertise in safe recovery, negotiations and preventing future kidnappings are also part of the group.

The Pentagon said 16 Defense Department personnel were on the team, including planners and advisers who were already in Nigeria and have been redirected to assist the government.

White House Press Secretary Jay Carney said at a press briefing Monday that the U.S. had experts in a variety of areas, including reconnaissance and surveillance, working on the case of the missing girls. However he said he did not have a “catalog” of the specific resources the experts were using.

The foreign help does not involve boots on the ground but rather experts in intelligence gathering, counter-terrorism and hostage negotiations.

French President Francois Hollande invited Nigerian President Goodluck Jonathan and leaders from neighboring Benin, Chad, Cameroon and Niger, as well as representatives of Britain, the EU and the United States, to a summit on Saturday to focus on Boko Haram, terrorism and insecurity in West Africa.

A French official said Jonathan had agreed to attend. He spoke on condition of anonymity because details of the gathering have not been finalized.

U.N. Secretary-General Ban Ki-moon said Said Djinnit, his special representative for West Africa, is in Abuja for meetings with the president and other officials on how the United Nations and its member states can help.

The girls' families have said most of those seized April 15 from a school in the northeastern town of Chibok are Christians.

It was impossible to fully authenticate the video released on Monday, though parents were trying to turn on a generator in Chibok, hoping to watch the video and identify their daughters, said a town leader, Pogu Bitrus.

"There's an atmosphere of hope — hope that these girls are alive, whether they have been forced to convert to Islam or not," he told The Associated Press by telephone. "We want to be able to say, 'These are our girls.'"

Bitrus said vegetation in the video looked like the Sambisa Forest, some 20 miles from Chibok, where the girls were believed to have been spirited away.

It is not known how many suspected Boko Haram members are detained by security forces. Hundreds were killed last month when leader Abubakar Shekau's fighters stormed the military's main northeastern barracks in Maiduguri, the terror group's birthplace and the headquarters of a year-old military state of emergency to put down the 5-year-old Islamic uprising.

Interior Minister Abba Moro scoffed at Boko Haram's demand to release prisoners late Monday, telling the BBC the group was in no moral position to make the offer.

"As far as this government is concerned, the option of [the] swap of innocent citizens with people who have taken arms against the country... is not on the table," he said.

But Mike Omri, the director of Nigeria's National Orientation Agency, told The Associated Press late Monday that the government will "use whatever kind of action" it takes to free the girls.

In a video last week, Shekau threatened to sell the girls into slavery. It arrived amid unverified reports that Christians among the students had been forced to convert to Islam and that some were taken to neighboring Cameroon and Chad, where they were forced to marry their abductors. Boko Haram means "Western education is sinful."

The latest video, obtained by The Associated Press, came through channels that have provided previous messages from Shekau, who spoke in the video in the Hausa language of northern Nigeria. Wearing camouflage fatigues, he clutched an assault rifle in the footage, which was imprinted with the Boko Haram insignia — a Quran resting on two crossed assault rifles — and below a black jihadi flag.

The mass abductions and failure of Nigeria's government and military to rescue the girls has aroused outrage at home and abroad. Last week, Nigeria belatedly accepted offers of help from the United States, Britain and other nations.