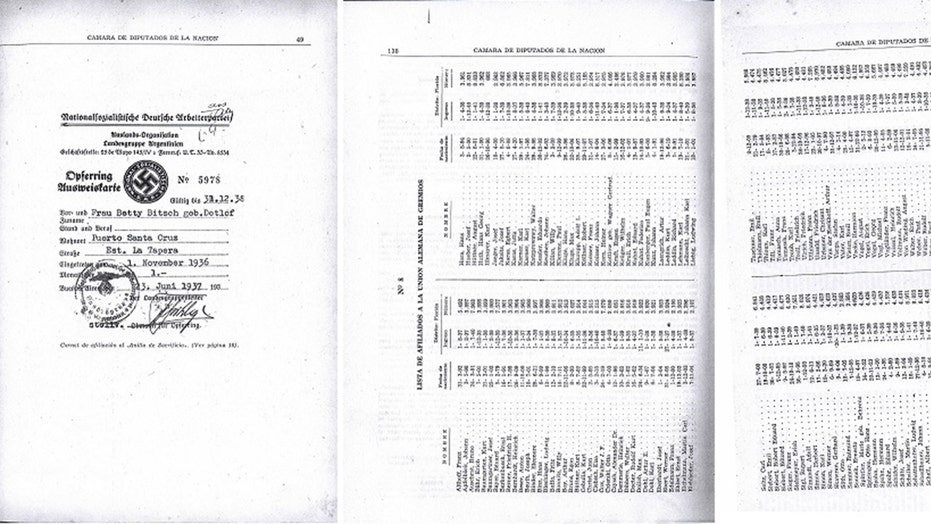 A newly discovered cache of documents appears to identify more than 12,000 Nazis who lived in Argentina in the 1930s and who had one or more bank accounts at what is now Credit Suisse bank.

The U.S.-based Simon Wiesenthal Center, which is famous for tracking down Nazis, said the files were found in a storeroom at a former Nazi headquarter in Buenos Aires.

Files discovered in Argentina reveal the names of 12,000 Nazis living who lived there in the 1930s and had Swiss bank accounts. (Simon Wiesenthal Center)

In 1935, the German Nazi government began seizing Jewish property after enacting its anti-Semitic laws. The looting continued well into the Holocaust in the 1940s.

According to the center, much of the monies were transferred to secret Swiss bank accounts, including the former Schweizerische Kreditanstalt, which became the Credit Suisse bank, based in Zurich. They believe some of these bank accounts may be among those listed in the newly discovered files in Argentina.

“We believe that these long-dormant accounts hold monies looted from Jewish victims,” the center said in a statement released this week.

During the 1930s, Argentina's former leaders – President Jose Felix Uriburu, who was nicknamed “Von Pepe,” and his successor, Agustin Pedro Justo, welcomed Nazis and their ideals.

While anti-Nazi President Robert Ortiz attempted to weed out Nazis from the country after rising to power in 1938, there were already thousands of Nazis living in Argentina.

According to the Wiesenthal Center, the NSDAP/AO – or German National Socialist Party/Foreign Organization – officially had 1,400 members and upwards of 12,000 supporting members from other pro-Nazi groups and organizations.

“These included such German companies as IG Farben (the supplier of Zyklon-B gas, used to exterminate Jews and other victims of Nazism) and financial bodies such as the 'Banco Alemán Transatlántico' and the 'Banco Germánico de América del Sur.' These two banks apparently served for Nazi transfers on the way to Switzerland,” explained Shimon Samuels, director for international relations at the Wiesenthal Center.

According to the center, a special commission established by Ortiz raises the so-called Nazi Union Alemana de Gremios or German Union of Syndicates, which had many of the names of Nazi supporters in the country.

A military coup in 1943 put a pro-Nazi regime in power in Buenos Aires, which ordered the commission’s findings burned.

The Wiesenthal Center has asked Credit Suisse to identify the dormant bank accounts, saying in a letter: “We believe it is very probable that these dormant accounts hold monies looted from Jewish victims, under the Nuremberg Aryanization laws of the 1930s.”

They added: “We are aware that you already have claimants as alleged heirs of Nazis in the list.”

In a statement to AFP, the bank said it had previously cooperated with the 1997-1999 commission chaired by Paul A. Volcker that investigated Credit Suisse and 60 other Swiss banks with the aim of identifying accounts that may or may have belonged to victims of Nazi persecution.

“We will, however, look into this matter,” it added.

During World War II and the years that followed, Argentina and other South American countries famously became save havens for Nazis, because they were run by fascist military dictators.

Some of the most-wanted Nazi war criminals escaped to South America, including Adolf Eichmann, a key organizer of the Holocaust, and Dr. Josef Mengele, known as “Doctor Death,” who carried out sick experiments on Auschwitz inmates. They fled to Argentina and Brazil, respectively.

Eichman was captured and hanged by Israel for his crimes in 1961, but Mengele avoided capture. He died when he drowned while swimming off the coast of Brazil in 1979.