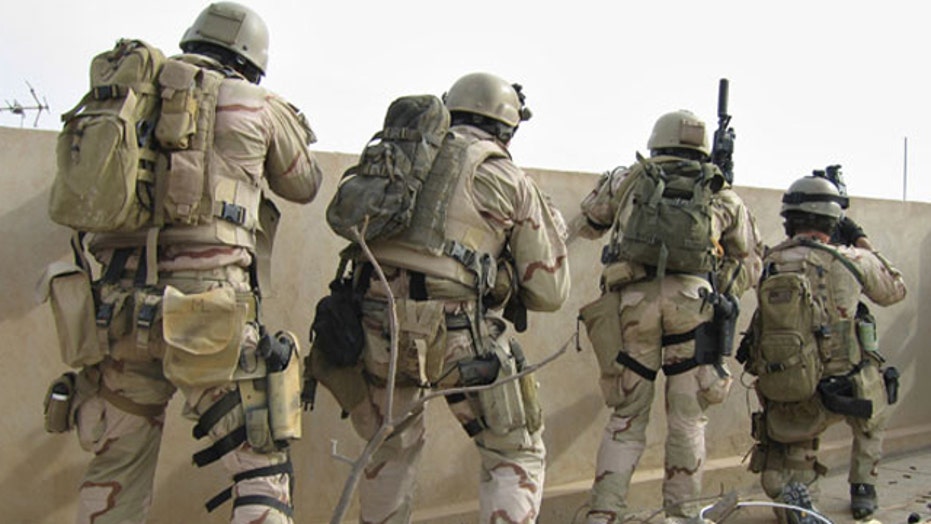 US Navy SEALs take over tanker hijacked by Libyan rebels

Navy SEALs have boarded and taken command of an oil tanker that was seized by three armed men at a Libyan port earlier this month, thwarting an attempt by a splinter militia group from selling nationalized Libyan oil on the black market.

A Pentagon spokesman said that the operation was carried out Sunday night on orders from President Obama in international waters southeast of Cyprus, at the request of the Libyan and Cypriot governments. There were no casualties. The USS Roosevelt provided an embarkation point for the SEALs as well as helicopter support and served as a command and control and support platform.

A group of around 30 men from Navy SEAL team 2 approached the Morning Glory oil tanker using rigid hull inflatable boats and used ladders to get on board. Two AK-47’s were found on the ship, but no shots were fired.

The rebels are detained on board and will be handed over to Libyan authorities. The SEALS have since left the ship but 25 sailors from the USS Stout are now on board.

"The Morning Glory is carrying a cargo of oil owned by the Libyan government National Oil Company. The ship and its cargo were illicitly obtained from the Libyan port of As-Sidra," a statement from Rear Adm. John Kirby's read.

The tanker had previously eluded a Libyan naval blockade around the port of Sidra, which is being held by militias who are demanding autonomy for eastern Libya. The maneuver led to the dismissal of Libyan Prime Minister Ali Zeidan by that country's parliament last week.

This past August, the rebels had seized three export terminals in the port that previously accounted for 700,000 barrels of oil per day. The struggle for control of Libya's oil wealth has been one of the main sources of strife in the country since the overthrow of Muammar Qaddafi in 2011.

The ship was docked at the port under the flag of North Korea, but officials in Pyongyang told the Associated Press they had canceled the vessel's registration after being notified that the tanker had been loaded for export in defiance of the authorities in Tripoli.

The Pentagon said that a team of sailors will take the tanker to a Libyan port. The Cypriot ministry of foreign affairs told Reuters that the vessel was heading west in the Mediterranean Sea with a U.S. military escort.

It was the second time in six months that U.S. forces had carried out an operation involving Libya. In October, a group of commandos from the U.S. Army's Delta Force captured Al Qaeda leader Nazih Abdul-Hamed al-Ruqai, known by his alias Anas al-Libi, who had been wanted in connection with the 1998 U.S. Embassy bombings in Kenya and Tanzania.

Fox News’ Justin Fishel and the Associated Press contributed to this report.