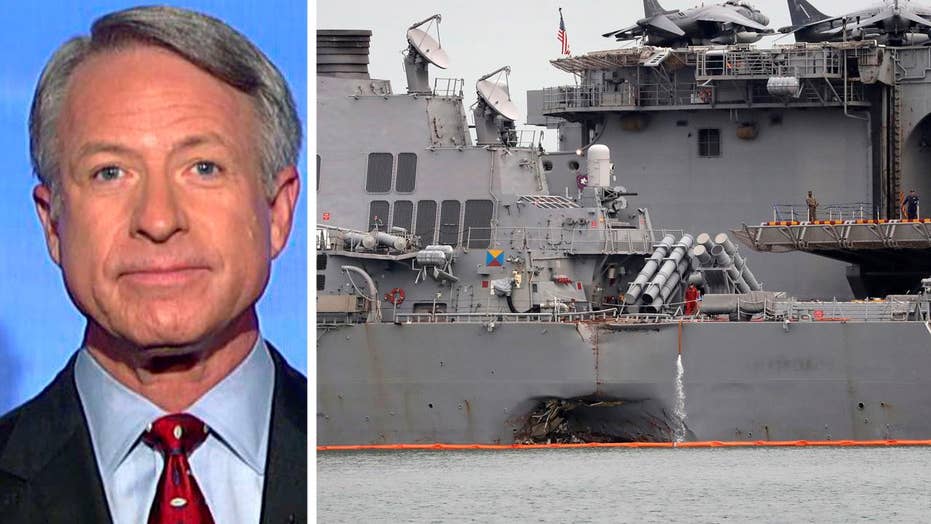 The search efforts for the U.S. sailors who went missing after the USS John S. McCain destroyer collided off the coast of Singapore was suspended Thursday after more than 80 hours, Navy officials announced.

In a statement, 7th Fleet officials said U.S. Navy and Marine Corps divers will continue recovery efforts inside flooded compartments on the ship, where a body was located earlier this week.

These are the US sailors who went missing after the USS McCain collided with an oil tanker in the Pacific. Top Row L-R: Nathan Findley, Henry Hoagland, Kevin Bushell, Abraham Lopez and Logan Palmer. Bottom Row L-R: Jacob Drake, Kenneth Smith, Dustin Doyon, and Timothy Eckles Jr. The Navy has not released a photo of Corey Ingram. (Provided by US Navy)

The multinational search is suspended in an approximately 2,100-square mile area east of the Straits of Malacca and Singapore.

Ten U.S. sailors went missing on Monday after the McCain collided with an oil tanker; five sailors were injured. It’s the second deadly mishap by the 7th Fleet in fewer than three months.

Divers have had trouble extracting bodies from the flooded compartments due to the extensive damage inside the ship, officials said Wednesday.

The others missing are:

The incident is under investigation to determine the facts and circumstances of the collision.

7th Fleet Commander Vice Adm. Joseph Aucoin was dismissed from duty on Tuesday “due to loss of confidence in his ability to command,” the Navy said.

Rear Adm. Phillip Sawyer, who had already been named as Aucoin’s successor, would assume command immediately.

The firing of Aucoin, a three-star admiral, was a rare dismissal of a high-ranking officer for operational reasons.

At any given time, the 7th Fleet has 60-70 warships, 200-300 aircraft and 40,000 Marine and Navy personnel. The U.S. Navy is now down to two destroyers in the Pacific that are capable of shooting down North Korean ballistic missiles.