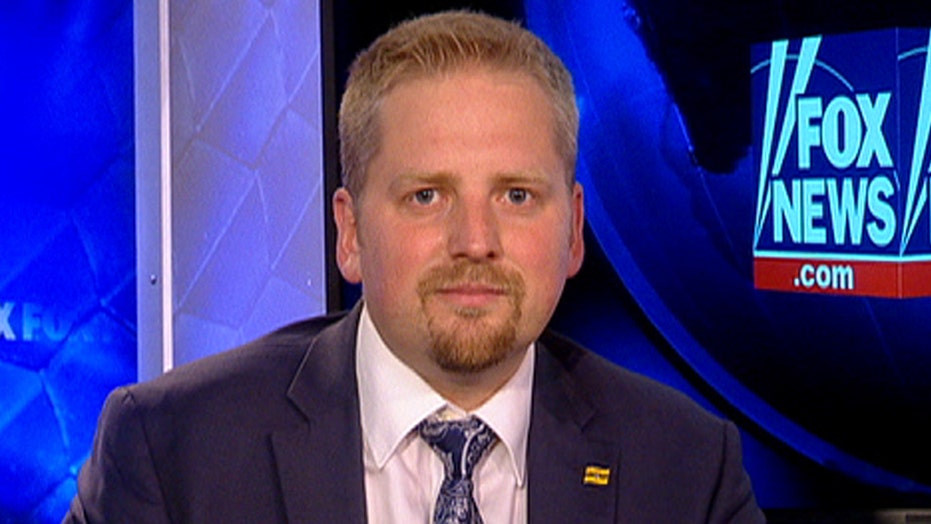 A self-styled head of state arrived in New York this week seeking, like countless others before him, to establish goodwill, form diplomatic ties and attract investment. But Vít Jedlička's most important and daunting task is to make the case that his nascent “nation” actually exists.

Jedlička is the founder of “Liberland,” a 2.7-square-mile sliver of what he believes is unclaimed “terra nullius” -- or no man’s land -- along the Danube between Croatia and Serbia. The idealistic Czech established his state on the motto “to live and let live,” and he and a team of believers declared its independence on May Day last year.

“We wanted to go against the flow,” Jedlička, who considers himself president of the internationally unrecognized nation, told FoxNews.com. “We want to be leaders in the Liberty Movement. We want [Liberland] to be the best place for people to live in and I think that this is the future -- voluntary interaction between people. Between citizens and their government.”

Jedlička was a libertarian politician in his homeland’s Conservative Party of Free Citizens when he set out to build a nation on the American-inspired principles of political freedom, voluntary association and autonomy. He found land he believed was unspoken for -- although that is the subject of dispute -- and planted his flag. One year later, nearly half-a-million people from across the globe have applied for citizenship to the micro nation.

A map showing Liberland's location along the Danube River.

Jedlička told FoxNews.com he was meeting with architects, members of the media and even possible financial investors during his trip to the U.S. He claimed that unnamed venture capitalists have shown interest in providing financial backing and that he and his cabinet are in the process of setting up a development and vicinity fund.

For now, the only resident of Liberland is one person who lived there before Jedlička ever circled it on a map. Should it become a full-fledged nation, Liberland will bloom with skyscrapers, apartment towers and bustling streets, all lured by a vision of low taxes, freedom and property rights, Jedlička promises.

Jedlička believes neither Croatia nor Serbia claimed the small piece of land when they established their borders following the breakup of Yugoslavia, and that international law allows him to claim the land for the Republic of Liberland. While there is historical tradition for claiming a no-man’s land, Croatia has dismissed Jedlička’s stake and bars entrance from its territory. That policy threw a monkey wrench into last year’s “Liberation Day,” as a throng of prospective citizens who had first gathered in Serbia -- including Jedlička -- were promptly arrested by Croatian police when they crossed the river into their promised land.

“The president of the self-proclaimed micro-nation of the Free Republic of Liberland, Vít Jedlička, has been arrested by Croatian police for illegally trespassing an international border,” read a statement from the Liberland Press Association provided to FoxNews.com at the time. “The arrest may have taken place on no man’s land territory. This would raise issues on the Croatian-Serbian border and could start a new crisis in the Balkans.”

An architectural rendering of what Liberland could look like once populated.

The official flag of Liberland.

The incident did not inflame old tensions, and, in fact, went mostly unnoticed. But Croatian authorities have patrolled the border since last year, preventing any of Liberland’s new citizens from entering.

To date, there has been no official diplomatic recognition from any members of the United Nations. The Serbian Ministry of Foreign Affairs has stated that Liberland does not infringe upon its territory, but has also branded the project “frivolous.”

“International law dictates that for this place to be a formal state they have to fulfill four criteria. They have to have a permanent population, have an established territory, an effective government, and a capacity to enter international relations,” William W. Burke-White, a law professor at University of Pennsylvania, told FoxNews.com last summer. “Even if they can fulfill the first three, if they lack the capacity to enter into international relations they will never be formally recognized as a county.”

Jedlička says he has a court date in September, and hopes to argue his case for sovereignty.

A rendering of another possible concept for the population of Liberland, an "elevated city."

“We are expecting the courts of Croatia will show that it’s illegal for them to go inside of Liberland and prevent people going there from Serbia,” Jedlička said, adding that he is confident that Liberland will be recognized by the international community within a year.

Next week, Jedlička and his tiny cabinet will hold a constitutional conference in Europe. On the horizon are drafting a constitution, establishing a government and coining a currency. But first, he has some convincing to do.

“From the very beginning we knew that it was going to take at least two years,” Jedlička said. “So the plan is for next summer. I think from there on, things will move pretty quickly.”