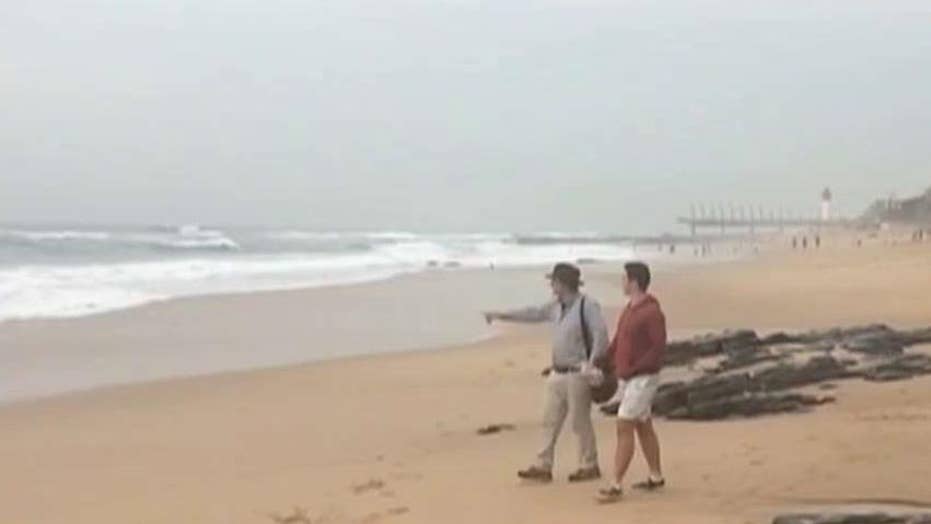 SYDNEY – A report on the almost three-year search for Malaysia Airlines Flight 370 said Tuesday the continuing mystery over the fate of the plane and the 239 people on board is "almost inconceivable."

But the Australian Transport Safety Bureau's final report on the search, which was abandoned in January, concedes that authorities are no closer to knowing the reasons for the plane's disappearance, or its exact location. This is despite last year's narrowing down of its most likely resting place to a 9,650-square mile patch of the southern Indian Ocean.

A Boeing 777 flaperon cut down to match the one from flight MH370 found on Reunion island off the coast of Africa in 2015, is lowered into water to discover its drift characteristics by Commonwealth Scientific and Industrial Research Organisation researchers in Tasmania, Australia, in this handout image taken March 23, 2017. (CSIRO/Handout via REUTERS)

The Boeing 777 carrying 227 passengers and 12 crew disappeared soon into its flight from Kuala Lumpur to Beijing on March 8, 2014.

A 52-day surface search covered an area of several million square square miles in the Indian Ocean west of Australia, before an underwater search mapped 274,000 square miles of seabed at depths of up to 20,000 feet. They were the largest aviation searches of their kind in history, the bureau said.

Despite other methods such as studying satellite imagery and investigating ocean drifts after debris from the plane washed ashore on islands in the eastern Indian Ocean and the east coast of Africa, the 1,046-day search was called off by the governments of Malaysia, China and Australia on Jan. 17.

"The reasons for the loss of MH370 cannot be established with certainty until the aircraft is found," the bureau, which coordinated the search, said in the 440-page report.

In this March 6, 2016, file photo, well wishes are written on a wall of hope during a remembrance event for the ill fated Malaysia Airlines Flight 370 in Kuala Lumpur, Malaysia. (AP Photo/Joshua Paul)

"It is almost inconceivable and certainly societally unacceptable in the modern aviation era with 10 million passengers boarding commercial aircraft every day, for a large commercial aircraft to be missing and for the world not to know with certainty what became of the aircraft and those on board," it said.

"The ATSB expresses our deepest sympathies to the families of the passengers and crew on board MH370. We share your profound and prolonged grief, and deeply regret that we have not been able to locate the aircraft, nor those 239 souls on board that remain missing."

However, the report said the understanding of where the plane may be is "better now than it has ever been," partly as a result of studying debris that washed ashore in 2015 and 2016 which showed the plane was "not configured for a ditching at the end-of-flight," meaning it had run out of fuel.

The search team also looked back at satellite imagery which showed objects in the ocean that may have been MH370 debris. The report said this analysis complemented work detailed in a 2016 review and identified an area of less than 9,650 square miles — roughly the size of the U.S. state of Vermont — that "has the highest likelihood of containing MH370."

The bureau noted the Malaysian government is "continuing work on their investigation of the facts and circumstances surrounding the loss of MH370."

The search was extremely difficult because no transmissions were received from the aircraft after its first 38 minutes of flight. Systems designed to automatically transmit the flight's position failed to work after this point, the report said.

Subsequent analysis of radar and satellite communication data revealed the aircraft had continued to fly for seven hours. Its last positively known position was fixed at the northern tip of Sumatra by surveillance systems operating that night, six hours before it ended its flight in the southern Indian Ocean.

The bureau said the search had at least led to some important gains in the field of locating missing aircraft on flights over deep ocean areas, with improvements made to systems for tracking aircraft.

"Steps are being taken to advance other aircraft systems including emergency locator transponders and flight recorder locator beacons," the report said.

ATSB Chief Commissioner Greg Hood praised the commitment of everyone involved in the search.

"This was an unprecedented endeavor and there has been an extraordinary response from the global community," he said in a statement.