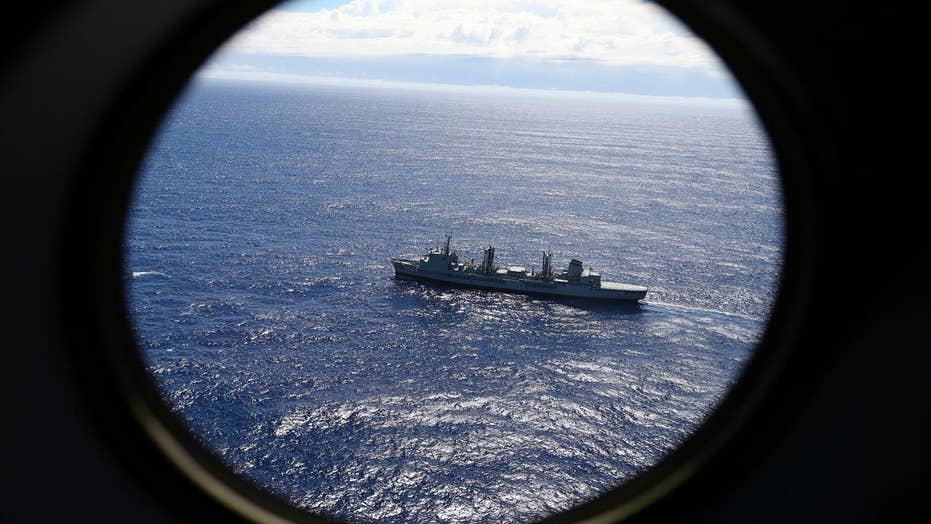 The drift analysis by Australian science agency CSIRO released Wednesday is based on French satellite images taken on March 23, 2014, and captures 12 "probably man-made" floating objects. The agency, however, could not determine whether the objects are actually the debris from an aircraft.

The Australian Transport Safety Bureau chief commissioner, Greg Hood, said in a statement, "Clearly we must be cautious" about the lack of a definite link to Flight 370.

“The image resolution is not high enough to be certain whether the objects originated from MH370 or are other objects that might be found floating in oceans around the world," Hood said.

A satellite image showing one of the 12 "probably man-made" objects in the southern Indian Ocean. (French Military Intelligence Service)

Hood previously said in January, after the Malaysian, Australian and Chinese governments suspended the underwater search for the aircraft, it was "highly likely" the Boeing 777 was within a 9,700-square-mile expanse identified by a panel of experts, and the agency would have liked to continue the hunt.

The ATSB is preparing a final report on the MH370 search, which is expected to be released by the end of September, according to Sky News Australia.

The area adjoins the original search zone, far southwest of Australia, that was identified through satellite analysis of the final hours of the flight, which apparently ended when the plane carrying 239 passengers and crew on board ran out of fuel.

The Australian bureau took over the search for Flight 370 from Malaysia a week after the airliner vanished. Satellite experts at Geoscience Australia were not asked to analyze the images until March 2017, when they concluded a dozen objects appeared to be man-made.

CSIRO then investigated where the objects might have originated before drifting for two weeks, identifying three potential crash sites.

"So that is a way of potentially narrowing down the search area with the very important caveat that, of course, we can't be totally sure that those objects seen in the images are actual pieces of plane," CSIRO oceanographer David Griffin said.

"This might be a really good clue. It might be a red herring. But if you are going to search, then you'd be silly to ignore this potential clue," he added.

Malaysian Deputy Transport Minister Aziz Kaprawi told the Associated Press the civil aviation department would need to evaluate the data since it's based on satellite images from a few years ago. "We will need to verify the data to see if it's credible before we make any decision," Aziz said.

The prospect of a new search has inspired private groups to search for the Malaysian airliner, including seabed exploration company Ocean Infinity, based in Houston, Texas, which has offered to launch a private search.

Voice370, a support group for victim's families, said under the terms of the offer made to Malaysia in April, Ocean Infinity "would like to be paid a reward if and only if it finds the main debris field," and urged Malaysia to accept the offer.

Aziz said Wednesday that the offer was still being negotiated. He said there were some other "monetary terms" set by the firm that were unacceptable to the government.

"There are three categories of findings in the offer. The terms are a bit ambiguous," Aziz said. "The government wants the terms to be transparent and clear." He declined to give details.