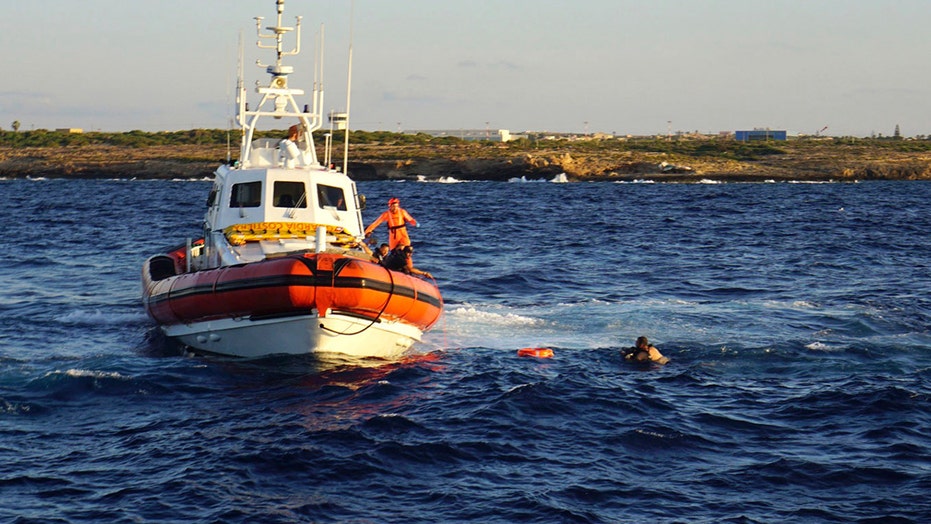 Migrants stranded aboard a Spanish rescue ship for 19 days in the Mediterranean Sea have resorted to jumping into the ocean in desperate attempts to swim ashore after Italy’s continued refusal to open its ports.

The crew of the Open Arms humanitarian vessel, anchored just miles from the Italian island Lampedusa, described the conditions on board as “desperate” and increasingly "out of control" as frustrated migrants resort to fighting or jumping ship.

One migrant jumped into the sea early Tuesday, refused to return to the ship and was brought to Lampedusa, a reporter with the Spanish public broadcaster TVE said. However, the move inspired 14 other migrants to follow his lead.

Migrants who jumped off the Spanish humanitarian rescue ship Open Arms are rescued after a desperate bid to reach the shore of the Sicilian island of Lampedusa, southern Italy. (AP Photo/Salvatore Cavalli)

The Spanish reporter described the jumpers as “going mad” after being trapped aboard the ship for weeks as Italy's hard-line interior minister, Matteo Salvini, repeatedly refused port access.

American actor Richard Gere visited the 121 migrants aboard the ship earlier this month to bring attention to the standoff as well as to much-needed food and supplies.

Those numbers have dwindled to 83 after dozens were evacuated in recent days because they were underage or ill, while some of the more desperate have jumped.

Migrants sit on the deck of the Open Arms vessel in front of island of Lampedusa as crew members described the situation on board as ''desperate,'' saying that a man threw himself in the water trying to reach land in plain view, while at the same moment a woman suffered a panic attack. (AP Photo/Francisco Gentico)

Italian Premier Giuseppe Conte, who announced his resignation Tuesday, declared last week that six nations – Spain, Portugal, Germany, France, Romania and Luxembourg – had offered to take the migrants, who were rescued at sea in early August off the coast of Libya.

Spain said Tuesday that it was dispatching a naval ship to escort the aid group's boat and its passengers to a port in the Spanish island of Mallorca – a voyage that would take days to reach the migrants.

Open Arms spokeswoman Laura Lanuza said she heard from crew members that "those who remain aboard are threatening to jump as well."