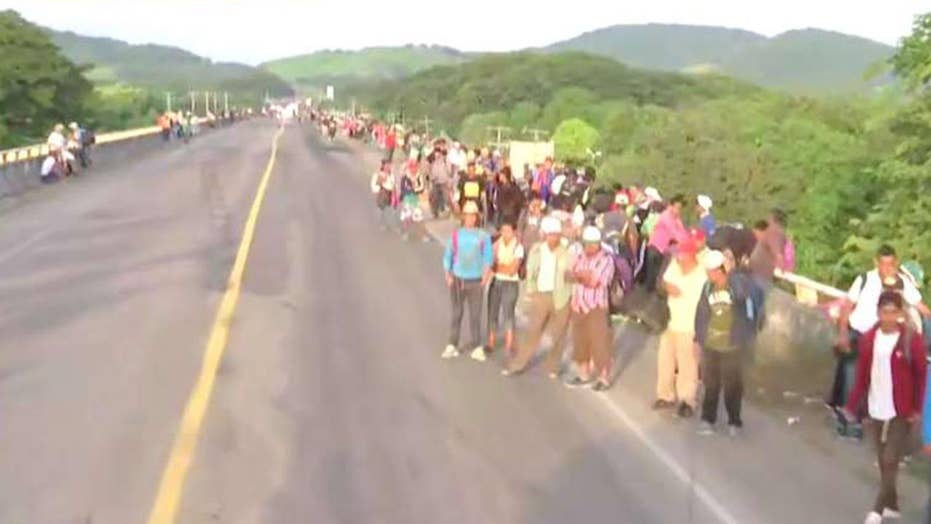 Participants not deterred by President Trump's warnings as the movement gains steam; Griff Jenkins reports from alongside the caravan in Oaxaca, Mexico.

Morale appears to be eroding inside the migrant caravans pushing toward the United States, with members dropping out to return home, some opting to try their luck in Mexico and others demanding "safe and dignified transport," as the endless walking begins to take its toll.

The first of the three caravans attempting the journey is still at least 1,000 miles from the U.S.-Mexico border. A Fox News crew traveling with the leading caravan Tuesday observed migrants standing on a bridge outside of the town of Niltepec, hoping to get rides in vehicles, while others looked to get on board buses that lined up.

That caravan is estimated to contain 4,000 people -- but the number is slowly shrinking as weary travelers drop out or apply for protected status in Mexico, spurring the caravan's leaders to make the request for help with transportation to Mexico's capital, according to the Associated Press.

"Of the friends that I have been with, all want to go back," Hasiel Isamar Hernandez, a 28-year-old mother of three from Honduras, told the news agency.

Hernandez added she decided to drop out of the caravan after hearing from her husband her 3-year-old daughter back home had stopped eating because she missed her mother. She was one of a group of migrants Monday who gathered at a checkpoint near Tapanatepec to ask for help returning home to Honduras. Many fled that country weeks ago to join the caravan in a bid to escape Honduras’ pervasive poverty and violence.

Both President Trump and the Department of Homeland Security have confirmed the presence of gang members inside the caravan, and as the days become weeks, reports of infighting between travelers have come out. Migrants from El Salvador reportedly beat a Guatamalan man after mistaking him for a kidnapper. The rising tensions prompted caravan leaders to call for a rest day and institute a "security committee," the Arizona Republic reported, another sign the unrest is not limited to rare altercations.

A new group of Central American migrants are met by Mexican Federal Police after the migrants waded in mass across the Suchiate River, that connects Guatemala and Mexico, in Tecun Uman, Guatemala. (AP)

The Mexican government, according to the Associated Press, has shown little inclination to assist the caravan, with the exception of its migrant protection agency giving some of the caravan’s stragglers rides to the next town over the weekend. It continues to make statements about the number of migrants who have applied for refugee status or asked to return to their home countries.

Levin Guillen, a 23-year-old from Honduras, told the AP that he's been getting threats from the same people who killed his father 18 years ago, and he hopes to reach an aunt who lives in Los Angeles. The farmer said he wants a chance to work and live in peace.

"According to what they say, we are not going to be very welcome at the border, but we're going to try,” he added.

On Monday, Mexico’s Federal Police also aggressively tried to turn back hundreds more migrants – who make up the second caravan – after they crossed the Suchiate River to enter Mexico from Guatemala.

Once on the Mexican side, the migrants were surrounded and escorted by dark-uniformed officers as sirens wailed. The standoff at the riverbank followed a more violent confrontation on the border bridge over the river Sunday night, when the migrants threw rocks and used sticks against Mexican police. One migrant died after being struck by a rubber bullet in that area, Guatemalan firefighters have said.

Subscribe to Fox News First -- your briefing on all the stories to start the day.

A group of Central American migrants bound for the U.S border wade in mass across the Suchiate River, that connects Guatemala and Mexico, in Tecun Uman, Guatemala. (AP)

Migrants in the leading caravan are planning Tuesday to walk to Juchitan, a trek of some 32 miles from their starting point this morning, the Associated Press reports.

They were observed by a Fox News crew yesterday getting help in the form of rides offered by trucks and other vehicles.

Ramiro Nolasco, the mayor of Zanatepec, said locals there Monday organized a bus and several trucks to carry caravan members.

"We are helping our brothers from other countries with food, water, and transportation," Nolasco said. "It is going to be very little, compared to what they need."

El Salvador's immigration agency, meanwhile, said a group of Salvadorans including several dozen children and adolescents – the third caravan -- crossed legally into Guatemala on Sunday and numbered about 500.

Much farther north on Monday, near the Hidalgo border crossing along Mexico’s border with Arizona, Mexico's Interior Department said in a statement that two Hondurans ages 17 and 22 were arrested when one of them tried to shoot at police in the town of Ignacio Zaragoza. It said the Glock failed to fire, and no agents were injured.