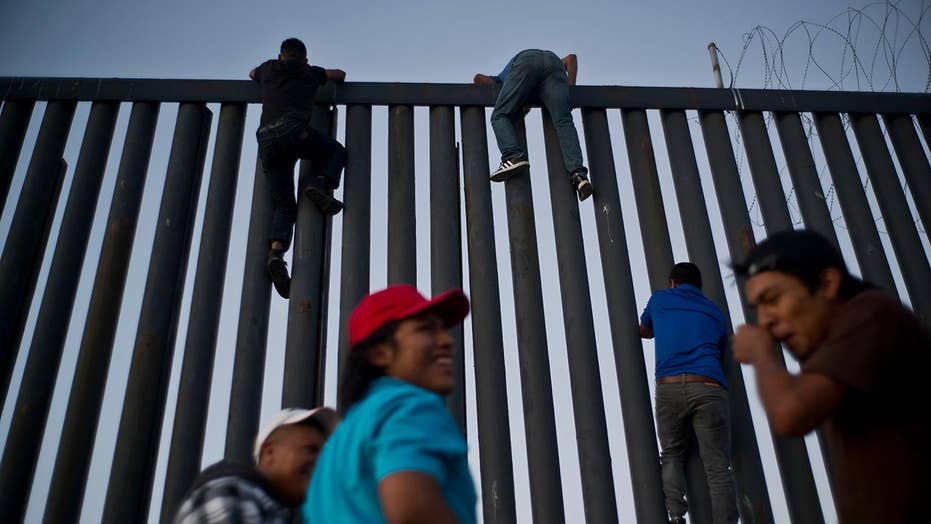 Republican strategist Ashley Hayek reacts to the protests happening near the border.

Some members of the migrant caravan, who have spent the past month traveling from Central America through Mexico to reach the U.S. border, are talking about crossing the border en masse as a way to provoke the Trump administration, an aid group has claimed.

"They have that intention,” Sergio Tamai, a founder of Angels without Borders, a group helping the migrants, told Telemundo 20 in San Diego. “I believe that thousands could make that jump."

At least 3,000 migrants have already arrived in Tijuana, a border city across from San Diego, Calif., the past two weeks. The federal government estimates the number of migrants could grow to 10,000 in the coming weeks, or months.

Those already in the city have camped out in tents, slept on dirt fields or under bleachers or are staying in overcrowded shelters throughout the city as they wait to figure out their next steps.

But some are growing impatient, and believe their best option is to plan a mass crossing.

“Most of us, yes, we want to be on the other side,” Jorge Molina, a Honduran migrant, told Telemundo. “Some want to jump over the wall, others to go another way, and others want to wait and see what kind of response they get.”

About 5,800 active-duty troops dispatched to the border to deal with the migrant crisis started coming home this week. On Monday, a judge barred the president from enforcing a ban on asylum for those who cross the U.S. border illegally – a decision the administration said would cause “countless illegal aliens to pour into our country."

Central American migrants wait to access to the shelter in Tijuana, Mexico, Tuesday, Nov. 20, 2018. At least 3,000 migrants have arrived in Tijuana and the federal government estimates the number of migrants could grow to 10,000 in the coming weeks and months. (AP Photo/Ramon Espinosa)

Tijuana residents have not fully embraced members of the caravan. During the weekend, about 500 residents protested the migrants by marching to an outdoor sports complex where the migrants were camped out, with protesters chanting: “Get out!” and “We don’t want you here!”

While the caravan members have concentrated in one area of the city, many residents fear with the passage of time their presence will take its toll and crime could go up. Since 2016, thousands of Haitians who also tried to get to the U.S. ended up settling in the city, while, at the same time, Tijuana has taken in thousands of Mexicans deported from the United States.

Tijuana also has been struggling with drug violence and some say they do not want the caravan bringing more problems.

Officials have said they arrested 34 caravan members for drug possession, public intoxication, disturbing the peace and resisting police, and they would be deported to their home countries.

Tijuana Mayor Juan Manuel Gastelum has made a point of saying the city is not happy with the migrants who began arriving last week, and he compared the Central American group unfavorably with about 3,000 Haitians who ended up staying after their bid to reach the U.S. failed last year.

Migrants, who are part of a Central American migrant caravan, leave Mexicali for Tijuana, Mexico, Tuesday, Nov. 20, 2018. Tensions have built as nearly 3,000 migrants from the caravan poured into Tijuana in recent days after more than a month on the road. (AP Photo/Rodrigo Abd)

“The Haitians arrived with their papers, with a clear vision,” Gastelum said in an interview posted on the city’s Facebook page. They came “in an orderly way, they never asked us for food or shelter,” renting apartments and making their own food. He said the Haitians found jobs and “inserted themselves in the city’s economy” and had not been involved in any disturbances.

By contrast, Gastelum said, the caravan of Central Americans, “had arrived all of sudden, with a lot of people — not all ... but a lot — were aggressive and cocky.”

"A human stampede would be an immediate provocation to the U.S.,” said Manuel Monárrez, a Tijuana councilman, told Telemundo. “And justify [President] Donald Trump to impact the binational dynamics of the economy.”