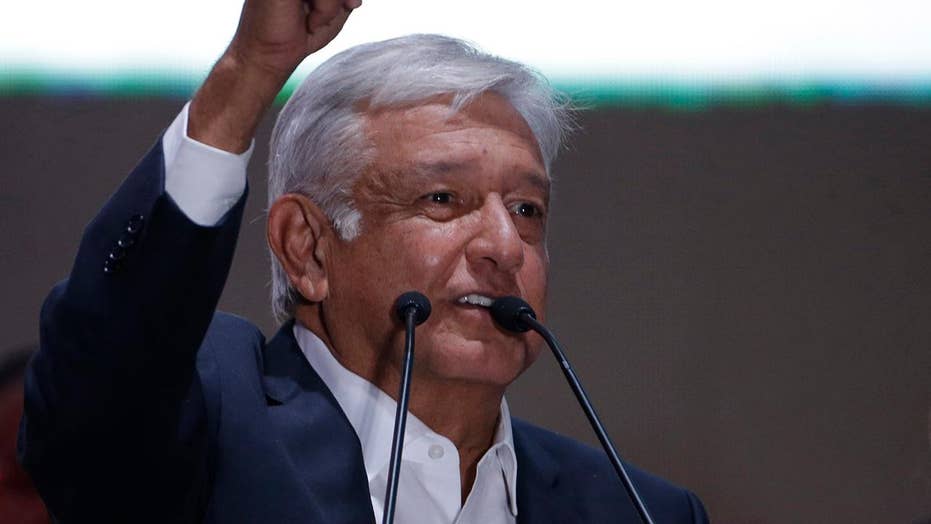 Mexico’s new president-elect, Andres Manuel Lopez Obrador, attended a meeting Tuesday with a visible lack of security, telling reporters that “the people” will protect him.

Lopez Obrador, a leftist populist who won the country’s election by a landslide on Sunday, traveled to a meeting with outgoing President Enrique Pena Nieto at the National Palace in Mexico City as a half dozen television cameramen on motorcycles trekked alongside his car, which had the windows open.

The 64-year-old suggested journalists would cover his back, but jokingly complained that "I have been hit a few times by cameras" and he told reporters: "Don't squash me."

The ingoing and outgoing presidents met to discuss the transition of power, which will take place Dec. 1.

Lopez Obrador said he planned a meeting with international leaders — including Pope Francis, rights activists and the United Nations — for Tuesday night to discuss ideas to solve Mexico’s violent crime.

That violence was on many minds as television stations carried live images of Lopez Obrador weaving through Mexico City's notoriously chaotic traffic in the front passenger seat of a compact car that was at least five years old.

One television reporter on a motorcycle even interviewed Lopez Obrador briefly through the car's open window.

The president-elect said he’s forgoing the country’s equivalent of secret service protection, and will essentially dissolve the agency back into the army. Lopez Abrador also said he’d sell off government airplanes and travel on commercial flights.

“He who fights for justice has nothing to fear,” he said. “I do not want to have bodyguards.”

OPINION: MANY QUESTIONS SURROUND MEXICO'S PRESIDENT-ELECT AND HIS RELATIONSHIP WITH THE US

Cuellar on US-Mexico relations in wake of Obrador win

On 'Your World,' Democratic congressman from Texas discusses the presidential election in Mexico and calls for a bipartisan approach to the trade war.

"It is a little demagogic to say, 'I am just like anybody else, I have no privileges,' when he isn't just an average citizen, he is a head of state," Crespo said. "A good part of the country's stability and rule of law depend on his security and health."

Lopez Obrador’s former security lead, who organized his detail when he served as Mexico City mayor from 2000 to 2006, said that while the all-female group never acted as his traditional bodyguards, the president-elect “is no longer Andres Manuel … He represents a whole nation.”

A total of 145 politicians — most local figures — have been killed in Mexico since September.