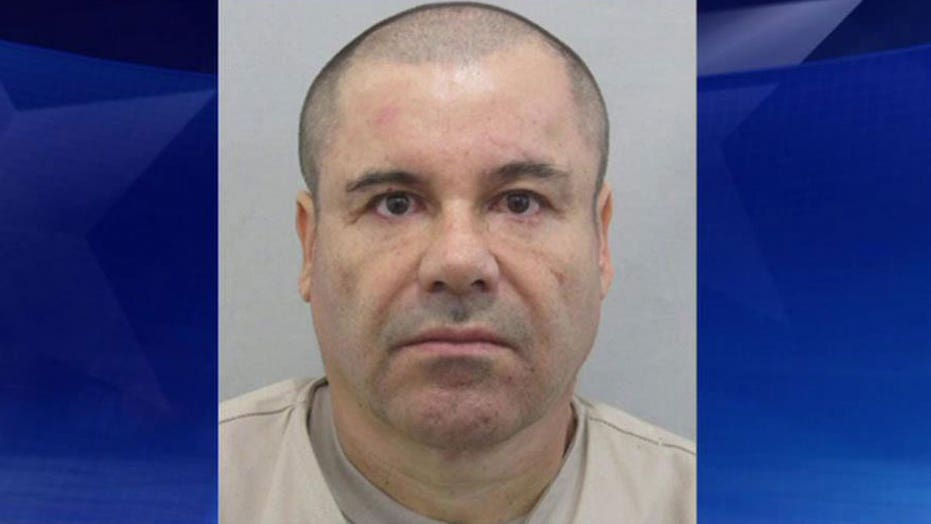 Mexico is willing to extradite drug lord Joaquin "El Chapo" Guzman to the United States, following what could be a lengthy legal process, a Mexican law enforcement official told the Associated Press on Saturday.

"Mexico is ready. There are plans to cooperate with the U.S.," said the official, who spoke on condition anonymity because he wasn't authorized to comment.

The statement reflects a sharp reversal in the country's official position, prior to the wealthy kingpin's escape from a Mexican maximum security prison in 2015.

But the official cautioned that there could be a lengthy wait before U.S. prosecutors can get their hands on Guzman, the most-wanted trafficker who was recaptured Friday after six months on the run: "You have to go through the judicial process, and the defense has its elements too."

Guzman was imprisoned once again in the Altiplano prison near Mexico City, following a Friday raid in his home state of Sinaloa.

Mexican marines marched Guzman in dark blue athletic garb to a helicopter that then flew him to the Altiplano maximum security prison near Mexico City, hours after his arrest.

Guzman escaped from Altiplano under the noses of guards and prison officials on July 11, slipping out a tunnel that underscored the level of corruption in Mexico while embarrassing the administration of President Enrique Pena Nieto.

In celebrating Guzman's latest capture, Mexican officials showed none of their bravado of two years ago, though they made clear that the intelligence building and investigation were carried out entirely by Mexican forces. They did not mention extradition.

"They have to extradite him," said Alejandro Hope, a security analyst in Mexico. "It's almost a forced move."

Late Saturday, Rolling Stone magazine published an interview that Guzman apparently gave to U.S. actor Sean Penn in his hideout in Mexico months before his recapture.

In the article and interview, Penn describes the complicated measures he took to meet the legendary drug lord. The men discuss topics ranging from drug trafficking to the Middle East.

Asked about who is to blame for drug trafficking, Guzman is quoted as saying: "If there was no consumption, there would be no sales. It is true that consumption, day after day, becomes bigger and bigger. So it sells and sells."

U.S. Sen. Marco Rubio, a Republican presidential candidate, echoed that sentiment, demanding that Guzman be immediately turned over to U.S. authorities. "Given that 'El Chapo' has already escaped from Mexican prison twice, this third opportunity to bring him to justice cannot be squandered," Rubio said.

Pena Nieto went on Twitter to announce the capture: "Mission accomplished: we have him."

Guzman, a legendary figure in Mexico who went from a farmer's son to the world's top drug lord, was apprehended in a soiled tank top after a shootout between gunmen and Mexican marines at the home in Los Mochis.

Apparently Guzman thought his story was worthy of Hollywood. Part of the reason authorities tracked him down to a house in an upscale neighborhood in a coastal city was because he wanted to film a biopic, Attorney General Arely Gomez said late Friday at the airport ceremony where the prisoner was shown off to the press.

"For that he established communication with actresses and producers, which became a new line of investigation," she said.

Friday's operation resulted from six months of investigation and intelligence-gathering by Mexican forces, who located Guzman in Durango state in October, but decided not to shoot because he was with two women and a child, she said. After that he took a lower profile and limited his communication until he decided to move to Los Mochis in December.

Gomez said that one of Guzman's key tunnel builders led them to the neighborhood in Los Mochis where authorities did surveillance for a month. The team noticed a lot of activity at the house Wednesday and the arrival of a car early Thursday morning. Authorities were able to determine that Guzman was inside the house, she said.

The marines decided to close in early Friday and were met with gunfire. Five suspects were killed and six others arrested. One marine was injured.

"You could hear intense gunfire and a helicopter; it was fierce," said a neighbor, adding that the battle raged for three hours, starting at 4 a.m. She refused to be quoted by name in fear for her own safety.

Gomez said Guzman and his security chief, "El Cholo" Ivan Gastelum, were able to flee via storm drains and escape through a manhole cover to the street, where they commandeered getaway cars. Marines climbed into the drains in pursuit. They closed in on the two men based on reports of stolen vehicles and they were arrested on the highway.

The troops took them to the roadside hotel Doux, where they awaited reinforcements, Gomez said.

In 2014, Guzman evaded capture by fleeing through a network of interconnected tunnels in the drainage system under Culiacan, the Sinaloa state capital.

"The arrest of today is very important for the government of Mexico. It shows that the public can have confidence in its institutions," Pena Nieto said later in a public address. "Mexicans can count on a government decided and determined to build a better country."

What happens now is more crucial for Guzman, whose cartel smuggles multi-ton cocaine shipments and marijuana and manufactures and transports methamphetamines and heroin, mostly to the U.S.

The United States filed requests for Guzman's extradition last June 25, just days before he escaped from prison. In September, a judge issued a second provisional arrest warrant on U.S. charges of organized crime, money laundering, drug trafficking, homicide and others. But Guzman's lawyers already had filed appeals and received injunctions that could delay the extradition process for months or even years.