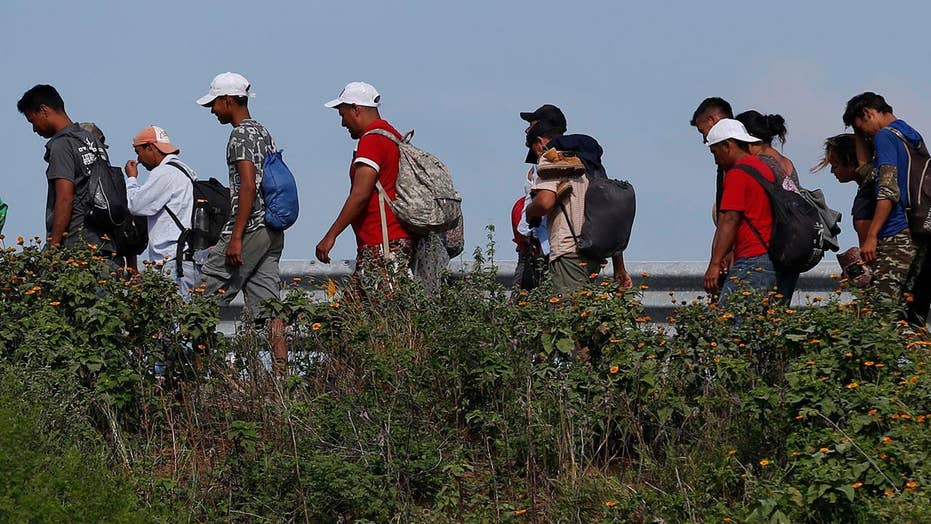 Do the caravan migrants have standing to sue Trump?

A number of Honduran migrants traveling toward the U.S. border filed a lawsuit against President Trump claiming a violation of constitutional rights because of the president's proposed change in asylum laws; reaction and analysis from former prosecutor David Bruno and former criminal defense attorney Emily Compagno.

A Mexican governor withdrew an offer of buses to transport a caravan of thousands of Central American migrants northward to Mexico City on its journey to the U.S. border.

At the same time, 1,000 U.S. troops had deployed to the southern border with Mexico at various locations, Fox News confirmed.

“It is very important that they be able to move soon from Veracruz toward another place,” Yunes said. “For that reason, we also offered them transportation so that, if possible, tomorrow ... they may be able to go to Mexico City or to the place they wish.”

Yunes said dozens of buses would be available.

“We are all going!” a caravan organizer told the group.

But then Yunes reversed himself, saying that because Mexico City’s water system was undergoing maintenance and much of the city would be without water over the weekend, it would not be correct to send the migrants there.

“I want to offer the migrants that while this problem is being resolved they accept my invitation to go to a city in Veracruz” that has the conditions to host them, he said.

The caravan, one of three trekking through Mexico to the U.S., contains around 4,000 people – down from a peak of more than 7,000.

Earlier in the day, a third caravan of migrants — this time from El Salvador — waded over the Suchiate River into Mexico on Friday, bringing another 1,000 to 1,500 people who want to reach the U.S. border.

The third caravan tried to cross the bridge between Guatemala and Mexico, but Mexican authorities told those traveling in it they would have to show passports and visas and enter in groups of 50 for processing.

The Salvadorans expressed misgivings that they would be deported, so they turned around and waded across a shallow stretch of the river to enter Mexico.

Although police were present, they did not try to physically stop the migrants, who later walked along a highway toward the nearest large city, Tapachula.

Mexico is now faced with the unprecedented situation of having three caravans stretched out over 300 miles of highways in the southern states of Chiapas and Oaxaca, with a total of about 6,000 migrants. The first, made up mostly of Hondurans, entered Mexico on Oct. 19.

Ahead of Tuesday’s midterm elections President Trump has ordered U.S. troops to the Mexican border in response to the caravans of migrants. More than 7,000 active duty troops have been told to deploy to Texas, Arizona and California.