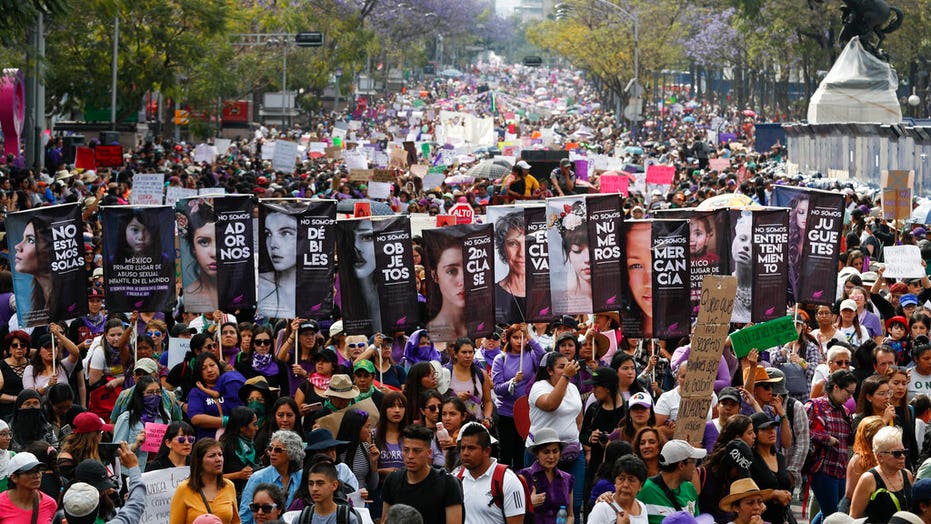 Thousands of women throughout Mexico stayed home from work or school Monday to raise awareness of the country’s rising epidemic of violence against women.

Central streets in the capital were empty of women and girls in the morning, as mostly men could be seen walking to offices, getting off buses or lining up to buy coffee. Some metro ticket stations were closed, and President Andrés Manuel López Obrador's morning press conference was dotted with empty seats as female journalists joined the strike.

López Obrador said his government was functioning during the strike and that it wasn't yet clear how many federal employees were observing it.

The back-to-back protests mark an intensification of the struggle by Mexican women against violence and impunity in one of the most dangerous countries in the world for females.

"What we want to provoke is that they see that if we're not there, the city won't circulate. That there are many of us. What are they going to do without us if they are killing us?" said Viviana Mendez, a lawyer and mother supporting the strike.

The idea was to become invisible for a day so that co-workers, bosses, boyfriends, husbands and, in some cases, children reflect on the absence of each participating woman.

Demonstrators set fire to the entrance of a building during a march for International Women's Day in Mexico City, Sunday, March 8, 2020.  (AP)

Government data says 3,825 women met violent deaths last year — 7 percent more than in 2018. That works out to about 10 women slain each day in Mexico. Thousands more have gone missing without a trace in recent years. Authorities seem incapable of preventing or properly investigating the crimes.

Asked about his government's strategy for combating violence against women, López Obrador said Monday that his administration is working on the issue every day.

MEXICO'S PRESIDENT RIPPED AFTER CLAIMING THOSE KILLED IN CARTEL, GANG VIOLENCE ARE DRUNK OR HIGH

The call to protest grew in February after two murders rocked Mexico City: that of a young woman horribly disfigured and that of a 7-year-old girl abducted from her school.

Many businesses, from banks and media companies to law firms, supported the strike. Some private schools canceled bus services that depend on female nannies to walk children to their front doors, while others enlisted fathers of schoolchildren to give classes in the absence of female teachers.