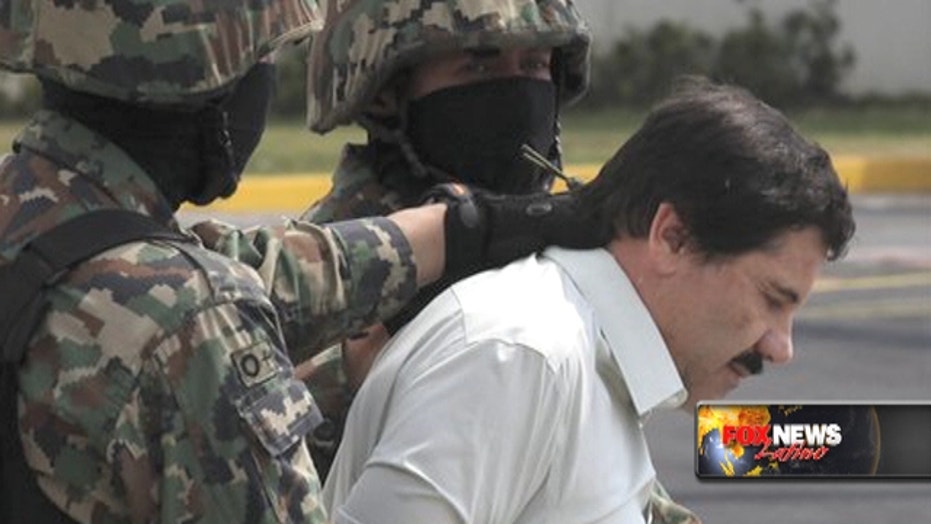 MEXICO CITY (AP) – Mexico's most powerful drug lord, Joaquin "El Chapo" Guzmán, has a lot to catch up on as he returns to a drug-trafficking landscape that has shifted considerably during his 17 months behind bars.

Rival cartels have been vanquished, and infighting among factions in Guzmán's own Sinaloa gang has killed dozens in the resort area of La Paz and Los Cabos on the Baja peninsula. A new and rapidly strengthening international cartel is waging a fierce battle against soldiers and police in western Mexico, even using a rocket-propelled grenade to force down a helicopter — a style at odds with Guzmán's more corporate-like Sinaloa.

Other Mexican or Colombian cartels working with street gangs in Central America may have stolen some of Guzmán's transit routes.

In the quiet since Guzmán broke out of Mexico's top -maximum security prison a little more than a week ago, dropping into a hole in his shower floor and fleeing on a motorbike through a mile-long tunnel, friends and foes alike waiting to see what he'll do next.

"I think he's going to want to regain the control that he lost," said Jack Riley, the Drug Enforcement Administration's top agent, who has spent years tracking Guzmán. "I think that's one of the reasons that I don't think he'd leave the country."

Internal DEA documents obtained by The Associated Press show that while Guzmán was locked up, the Sinaloa Cartel was controlled by Ismael "El Mayo" Zambada García and Rafael Caro Quintero, two of the most traditional, old-school capos, plus the newer Damaso Lopez Nunez and Guzmán's son, Ivan Archivaldo Guzmán.

Even while behind bars, Guzmán was thought to be giving directions to his son and other cartel members "via the attorneys who visited Guzmán-Loera in prison and possibly through the use of a cellphone provided ... by corrupt prison guards," the documents say.

How much the Sinaloa cartel's operations have changed depends on how involved Guzmán was from prison. The complexity and success of his escape suggests he still had major input, if not day-to-day control, experts say.

But he is operating in a new dynamic, as the Mexican government has taken out the leaders of other major cartels as well. Since Guzmán's February 2014 arrest, authorities have arrested Héctor Beltrán Leyva, head of the cartel bearing his name, as well as the Juárez Cartel's Vicente Carrillo Fuentes, Knights Templar's Servando "La Tuta" Gómez, and the Zetas' Omar Treviño Morales. Knights Templar leader Nazario Moreno died in a shootout with soldiers.

Only the Jalisco New Generation, the big gun cartel that forced down the helicopter, has used the void to grow into one of Mexico's most powerful international criminal groups. It started partly out of the methamphetamine division of Sinaloa run by the late Ignacio "Nacho" Coronel, and had been considered a Sinaloa ally. But no one knows how those two top cartels will interact now.

"The Jalisco cartel has been growing ... and Sinaloa was debilitated by the arrest of El Chapo," said Raúl Benítez, a security expert with the National Autonomous University of Mexico. "El Chapo surely will try to restore the power of Sinaloa."

A similar power grab has occurred in Honduras, where the Mara Salvatrucha gang has moved up from extortion and street-corner drug sales to moving drug shipments from Colombia through the region, said Samuel Logan of Southern Pulse, a business and security consulting firm.

"I don't know what side they're on, if they're really working for the Colombians or the Mexicans, but Chapo's people lost a lot of turf at the end of last year and the supply chain is hurting, " Logan said. "So he may be working to build that up again."

Over the last year, the Mexican government made numerous hits on the Gulf and Zetas cartels that control the border of Tamaulipas state alongside Texas. Guzmán is likely to have his eyes on the border city of Nuevo Laredo across from Laredo, Texas, one of the world's largest land ports and one he tried to capture before, said Guillermo Valdes, the former director of the Mexican intelligence agency.

"El Chapo has wanted to control Nuevo Laredo since 2001," he said. "There were three very strong moments in the war for the control of this city and he never could do it."

Valdes takes his lesson from Guzmán's history. After breaking out of another top-security prison in 2001, Guzmán went from a mid-level trafficker to one of the richest and most powerful drug lords in the world. He may be looking to expand again.

"This man has become a legend," Valdes said. "If you look at the drug trafficking organizations that existed in 1990 and the ones existing today, Sinaloa is the only one that has endured, and that speaks to the quality of the strategy and leadership."