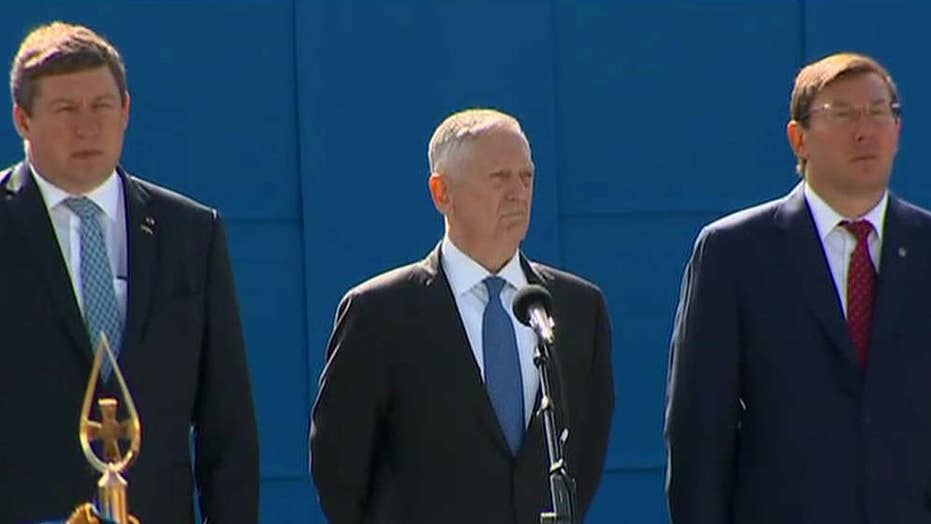 Defense secretary sends message to Moscow during visit to Kiev

The visit, timed for the 26th anniversary of Ukraine's independence from Moscow, was the first by a Pentagon chief to the former Soviet republic since Robert Gates arrived in 2007.

"Despite Russia's denials, we know they are seeking to redraw international borders by force," Mattis said, a plan he described as undermining European nations and stirring tension.

"Have no doubt," Mattis said at a news conference with Ukrainian President Petro Poroshenko. "The United States stands with Ukraine." He said Washington does not, "and we will not," accept Russia's annexation of Crimea, a 2014 action that was followed by Russian military intervention in support of separatists in eastern Ukraine.

Poroshenko told reporters that Crimea is Ukrainian territory. "It should come back to Ukraine," he said.

Mattis said Russia had not abided by the Minsk ceasefire agreement meant to end the separatist conflict in eastern Ukraine, and the U.S. would continue to maintain sanctions on Moscow.

When he was asked by a reporter whether he agrees with the Obama administration's view that selling defensive lethal weapons to Ukraine would provoke Moscow, Mattis replied, "Defensive weapons are not provocative unless you're an aggressor."

Mattis declined to say explicitly what he would recommend to the White House on the weapons issue.

"On the defensive lethal weapons, we are actively reviewing it, I will go back now having seen the current situation and be able to inform the secretary of state and the president in very specific terms what I recommend for the direction ahead," Mattis said, according to Reuters.

Poroshenko sidestepped the question of how soon he expects a White House decision on arms, but said Russia should realize that stepping up U.S. military support for Kiev "would increase the price if Russia made the decision to attack my troops and my territory."

Poroshenko said an estimated 3,000 "regular" Russian troops are in eastern Ukraine, and that he expects the withdrawal of these troops and the release of hostages before the relationship gets better.

The Trump administration has reopened consideration of long-rejected plans to give Ukraine lethal weapons, the Associated Press reported.

In his remarks alongside Poroshenko, Mattis said the U.S. is committed to helping Ukraine build and modernize its armed forces.

"It is long past time for the United States to provide Ukraine the defensive lethal assistance it needs to deter and defend against further Russian aggression," McCain said in a statement.

"Raising the cost of aggression may help to change Vladimir Putin's calculus, pressure Russia to fully comply with the Minsk agreements, and, ultimately, create more stable security conditions on the ground that are essential for peace."