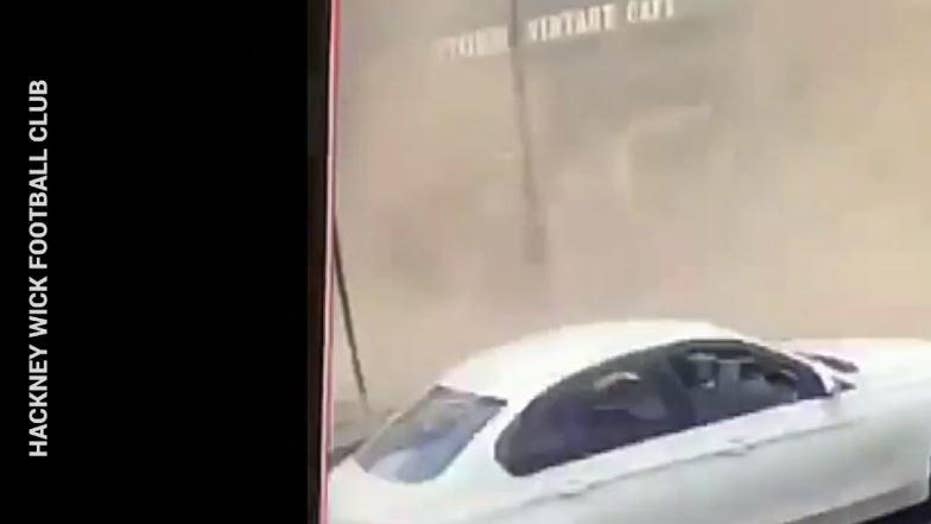 Watch: The lucky moment a man narrowly avoids being crushed by collapsing roof in London.

Stunning video shows a man in London narrowly escape being crushed by falling bricks as a howling wind caused a café's roof to collapse Sunday.

CCTV footage shows the passerby strolling past Stokey Vintage Café on Stoke Newington High Street just moments before a mass of bricks and rubble tumbled to the ground.

“While the boys were fundraising this happened across the road,” the Hackney Wick FC soccer club shared on Twitter with the CCTV video. “A reminder that you can be taken at any time so be thankful for surviving another day.”

Petulia Mattioli, who had walked past the building minutes before the incident, told the Evening Standard that she had stopped at the café windows for a few seconds before crossing the road.

“You never realize how death is real until you face it…I was lucky,” she said. Mattioli is seen in the CCTV footage crossing the road before the man strolls past.

The London Fire Brigade said no one was injured in the building collapse, but that clean up took about two hours.

Demet Sahin, who jointly runs the cafe, told the Standard the rubble also missed her brother Turgay, who was standing outside.

According to the BBC, a weather warning was in place for wind across southern England and Wales this weekend, when gusts of up to 65 mph swept across the country.

The Met Office said similar conditions are expected to continue throughout the week.