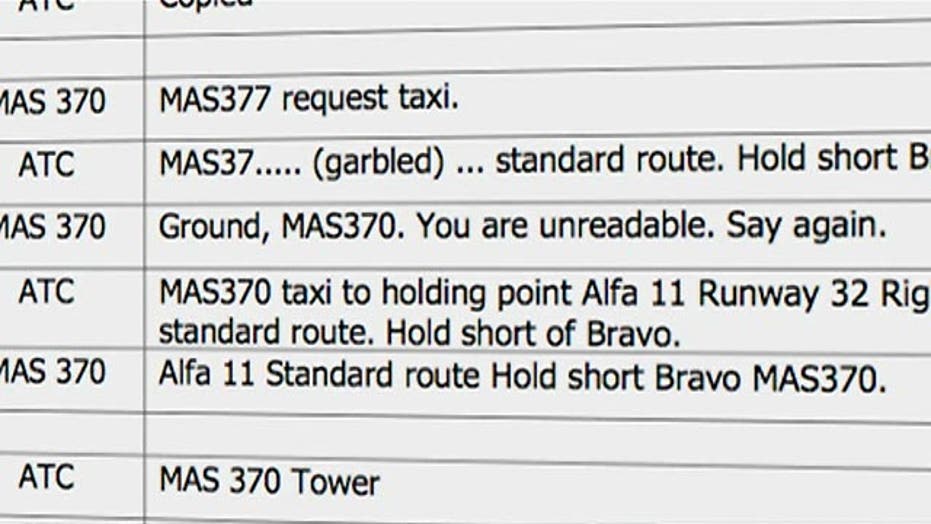 KUALA LUMPUR, Malaysia – It may mean little to investigators that the last words air traffic controllers heard from the lost jetliner were "Good night, Malaysian three-seven-zero," rather than "All right, good night." But to Malaysian officials whose credibility has been questioned almost from the beginning, it means a great deal.

Malaysian officials said more than two weeks ago that "All right, good night," were the last words, and that the co-pilot uttered them. They changed the account late Monday and said they are still investigating who it was that spoke. The discrepancy added to the confusion and frustration families of the missing already felt more than three weeks after Malaysia Airlines Flight 370 disappeared, and as of Tuesday officials had not explained how they got it wrong.

"This sort of mistake hits at the heart of trust in their communications. If Malaysia is changing what the pilot said, people start thinking, `What are they going to change next?" said Hamish McLean, an expert in risk and crisis communication at Griffith University in Brisbane, Australia.

"Information is in a crisis is absolutely critical. When we are dealing with such a small amount of information its needs to be handled very carefully," he said.

Authorities have been forced on the defensive by the criticism, the most forceful of which has come from a group of Chinese relatives who accuse them of lying about -- or even involvement in -- the plane's disappearance. In part responding to domestic political criticism, defense minister Hishammuddin Hussein has taken to retweeting supportive comments on Twitter. He has twice in recent days proclaimed that "history would judge us well" over the handling of the crisis.

The government's opponents disagree. Opposition leader Lim Kit Siang said the correction set off a "medley of shame, sadness and anger" and strengthened the case for creating an opposition-led parliamentary committee to investigate the government's performance in the search.

The communications skills of any government or airline would have been severely tested by the search for the Boeing 777-200 and its 239 passengers and crew. So far not a scrap of debris has been found.

"There has been very little to tell and a lot of unanswered questions," said Andrew Herdman, director-general of the Association of Asia Pacific Airlines. "There is frustration on the lack of new information, frustration over progress with investigations and the search. That frustration is being channeled to the Malaysian authorities but I think it's a bit premature to use that to reflect adversely on how they are doing."

Still, the government's handling of information has at times fed perceptions that it was holding back. From the first day of the search, crews were looking far to the west of the plane's last point of contact with air-traffic controllers, but it took about a week for officials to explain that radar had detected the plane in the area.

"That was a terrible, terrible response," said Lyall Mercer, the principal of Australian-based Mercer PR, a public relations company. "It says to the families that `we know things that we are not going to share' and that `something else is more important than you'."

The piece of information that families most want to hear -- whether their relatives are alive or dead -- has remained impossible to say with finality, creating a dilemma for the government.

On March 24, it tried to address that. Malaysia Airlines officials met families in Kuala Lumpur and Beijing and sent a text message to others saying "we have to assume beyond any reasonable doubt that MH370 has been lost and that none of those on board survived."

At a news conference half an hour later, Prime Minister Najib Razak was less direct. He said with "deep sadness and regret" that the plane's last known position was "a remote location, far from any possible landing sites," and that the flight "ended" in the southern Indian Ocean.

Sarah Bacj, a 48-year-old American expatriate teacher whose boyfriend, Philip Wood, was on the flight, said the decision by Malaysia Airlines to inject some certainty into the fate of the passengers was a mistake. Until then, she said she thought the Malaysian government had acted responsibly, but the text message "totally violated my trust."

"I fell off the cliff," Bacj said. "The way the text message came, I expected proof. That they had found the bodies, or that they had found confirmed wreckage, or something ...  but they didn't actually tell us anything at all. The only thing they did was make a judgment statement about evidence -- unconfirmed evidence, mind you."

The final words from the cockpit, and who said them, are of interest not only because there are few other clues to the disappearance, but because the communication occurred just a minute before the plane's transponders were shut off. The words were in English, as aviation communications are around the world.

PR experts and professionals said the important thing now is to try and give the families as much information as possible, before the media gets hold of it, and to keep paying attention to them even when the media gaze had drifted.

On Tuesday, the Malaysian government announced that technical experts from Malaysia, China and Australia would brief the families in a closed-door session in Kuala Lumpur.