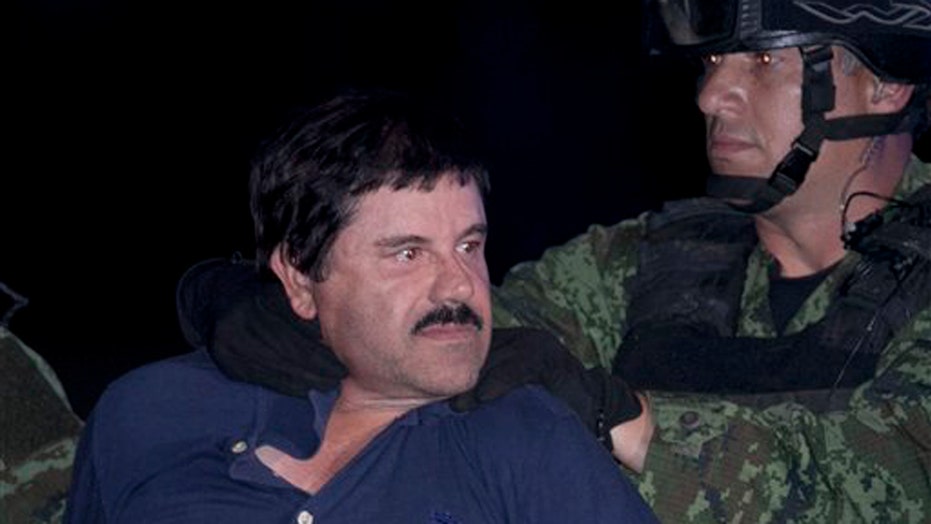 'El Chapo' back in Mexican prison where he escaped

Former prosecutor weighs in on likelihood the convicted drug lord will be extradited to the U.S. and the 'Affluenza' teen case

Guzman was arrested Friday after a gun battle in his home state of Caliacan that killed five and injured one Mexican marine. Mexico Attorney General Arely Gomez said Friday that Guzman’s contact with actors and producers for a biopic essentially gave him away and helped authorities track him.

The Mexican official, who spoke on condition of anonymity, told the Associated Press that it was the Penn interview that led authorities to Guzman in a rural part of Durango state in October. Authorities aborted the raid because Guzman was with two women and a child.

Additionally, Rolling Stone reported that it was Mexican actress Kate del Castillo who helped broker the interview between Guzman and Penn.

In a two-minute video, Guzman sits in front of a chain link fence and speaks to a camera. Guzman, whose face is clearly visible, is wearing a blue shirt and dark baseball cap. A picture also shows Penn shaking hands with the world’s most notorious drug lord.

Guzman is asked in the interview whether he was responsible for the high level of drug addiction in the world. He responded: "No, that is false, because the day I don't exist, it's not going to decrease in any way at all. Drug trafficking? That's false."

The report of an interview with Guzman follows Mexico’s apparent willingness to extradite him to the U.S. to face drug charges in several states. A Mexican law enforcement official told the Associated Press earlier Saturday that Mexico plans to cooperate with the U.S.

"Mexico is ready. There are plans to cooperate with the U.S.," said the official, who spoke on condition anonymity because he wasn't authorized to comment.

The official cautioned that there could be a lengthy wait before U.S. prosecutors can get their hands on Guzman, the most-wanted trafficker who spent the last six months running from authorities.

Guzman was taken back to the Altiplano maximum-security prison late Friday dressed in blue athletic garb and ushered by marines. Guzman escaped from the same prison in July 2015.

Friday's operation resulted from six months of investigation and intelligence-gathering by Mexican forces, who located Guzman in Durango state in October, but decided not to shoot because he was with two women and a child, she said. After that he took a lower profile and limited his communication until he decided to move to Los Mochis in December.

Gomez said that one of Guzman's key tunnel builders led them to the neighborhood in Los Mochis where authorities did surveillance for a month. The team noticed a lot of activity at the house Wednesday and the arrival of a car early Thursday morning. Authorities were able to determine that Guzman was inside the house, she said.

The marines decided to close in early Friday and were met with gunfire. Five suspects were killed and six others arrested. One marine was injured.

"You could hear intense gunfire and a helicopter; it was fierce," said a neighbor, adding that the battle raged for three hours, starting at 4 a.m. She refused to be quoted by name in fear for her own safety.

Gomez said Guzman and his security chief, "El Cholo" Ivan Gastelum, were able to flee via storm drains and escape through a manhole cover to the street, where they commandeered getaway cars. Marines climbed into the drains in pursuit. They closed in on the two men based on reports of stolen vehicles and they were arrested on the highway.

The troops took them to the roadside hotel Doux, where they awaited reinforcements, Gomez said.

In 2014, Guzman evaded capture by fleeing through a network of interconnected tunnels in the drainage system under Culiacan, the Sinaloa state capital.

"The arrest of today is very important for the government of Mexico. It shows that the public can have confidence in its institutions," Pena Nieto said later in a public address. "Mexicans can count on a government decided and determined to build a better country."

What happens now is more crucial for Guzman, whose cartel smuggles multi-ton cocaine shipments and marijuana and manufactures and transports methamphetamines and heroin, mostly to the U.S.

The United States filed requests for Guzman's extradition last June 25, just days before he escaped from prison. In September, a judge issued a second provisional arrest warrant on U.S. charges of organized crime, money laundering, drug trafficking, homicide and others. But Guzman's lawyers already had filed appeals and received injunctions that could delay the extradition process for months or even years.