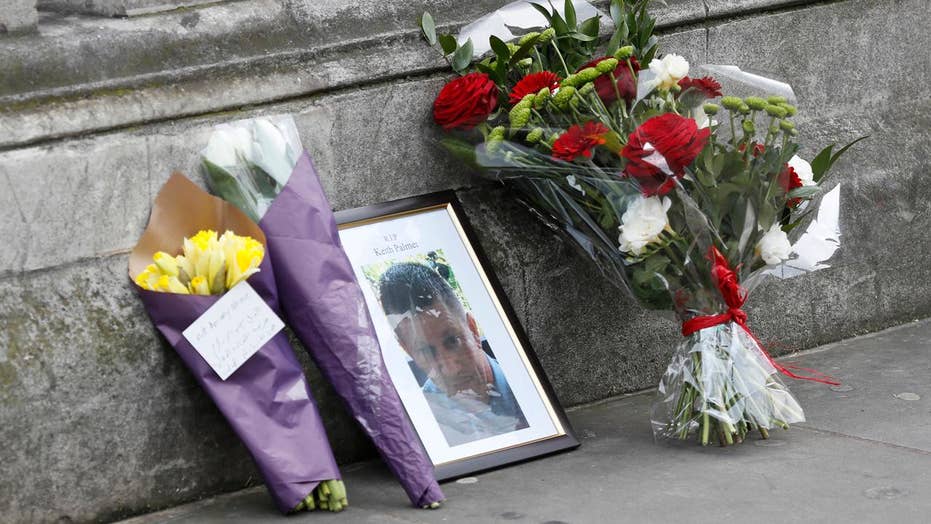 Catherine Herridge has the details

The Islamic State has claimed responsibility for the terror attack that left four people dead, including the assailant and a police officer, outside of London’s Parliament building on Wednesday, according to the Amaq media agency.

"The perpetrator of the attacks yesterday in front of the British Parliament in London is an Islamic State soldier and he carried out the operation in response to calls to target citizens of the coalition," the Amaq statement said.

The claim of responsibility comes fewer than 24 hours after a man driving an SUV plowed into pedestrians on Westminster Bridge near the Parliament building.

Two people were killed and more than 30 others injured before the attacker fatally stabbed police officer Keith Palmer on the Parliament’s grounds. Police shot the attacker, who later was pronounced dead.

The attacker's identity has not been revealed, but British Prime Minister Theresa May said he was born in Britain and known to authorities who had once investigated him for links to religious extremism.

"Our working assumption is that the attacker was inspired by Islamist ideology," she told members of Parliament. “We know the threat from Islamist terrorism is very real. But while the public should remain utterly vigilant, they should not and will not be cowed by this threat.”

British officials did not release the attacker's identity or confirm a link with the Islamic State group, though May did say it would be wrong to describe the attack as "Islamic" extremism.

"It is Islamist terrorism," she said. "It is a perversion of a great faith."

On Thursday, British police announced that six homes were raided and eight arrests were made in connection to the Wednesday terror attack that left four dead, including the attacker and a police officer.

Armed police carried out the raid in the central city of Birmingham, about 130 miles north of London; however, police said they believed the terror attacker acted alone during his assault on the Westminster Bridge near Parliament.

May called the attack “sick and depraved,” and stood defiant against it.

“An act of terrorism tried to silence our democracy, but today we meet as normal … we are not afraid and our resolve will never waver in the face of terrorism,” she said. “Democracy and the values it entails will always prevail.”

While she honored the police, May also saluted the everyday actions of millions who went about their lives in London as normal and describing it as proof that the attack failed to break the determination of Londoners and Britons.

"As I speak, millions will be boarding trains and airplanes to travel to London, and to see for themselves the greatest city on Earth," she told the House. "It is in these actions -- millions of acts of normality -- that we find the best response to terrorism -- a response that denies our enemies their victory, that refuses to let them win, that shows we will never give in."

UK PARLIAMENT ATTACK IS THE LATEST TERROR SCARE FOR LONDON

Parliament began its moment of silence at 9:33 a.m. (5:33 a.m. ET), honoring the slain police officer, 48-year-old Palmer, a 15-year veteran of the Metropolitan Police and a former soldier. Parliament then returned to business, an act of defiance to those who had attacked British democracy.

"Those who carry out such wicked and depraved acts as we saw yesterday can never triumph in our country and we must ensure it is not violence, hatred or division, but decency and tolerance that prevails in our country," Trade Secretary Liam Fox said.

"Hear, hear!" lawmakers from all parties responded in unison.

Mayor Sadiq Khan called for Londoners to attend a candlelit vigil at Trafalgar Square on Thursday evening in solidarity with the victims and their families and to show that the city remains united.

"I really believe that some very searching questions are now being asked," former leader of the UK Independence Party Nigel Farage, now a Fox News contributor, said on "Fox & Friends." "I think the population of this country and indeed most of the other European states -- we're now saying to our governments, look, frankly, you have brought this upon us through immigration policies and through not cracking down on extremism that has grown in communities. What are you going to do for us? So we're calm, but I do think we demand answers."

Metropolitan Police counterterrorism chief Mark Rowley revised the death toll from five to four: the police officer, two civilians and the attacker. He said that 29 people required hospitalization and seven of them were in critical condition. He also said that authorities were still working out the number of "walking wounded." Police had previously given the total number of injured as around 40.

President Trump was among world leaders offering condolences. Former President Obama tweeted that this attack would not "shake the strength and resilience of our British ally."

London has been a target for terrorism many times over past decades. Just this weekend, hundreds of armed police took part in an exercise simulating a "marauding" terrorist attack on the River Thames.

May underscored that the attack targeted "free people everywhere," and she said she had a response: "You will not defeat us."

"Let this be the message from this House and this nation today: our values will prevail," she said.