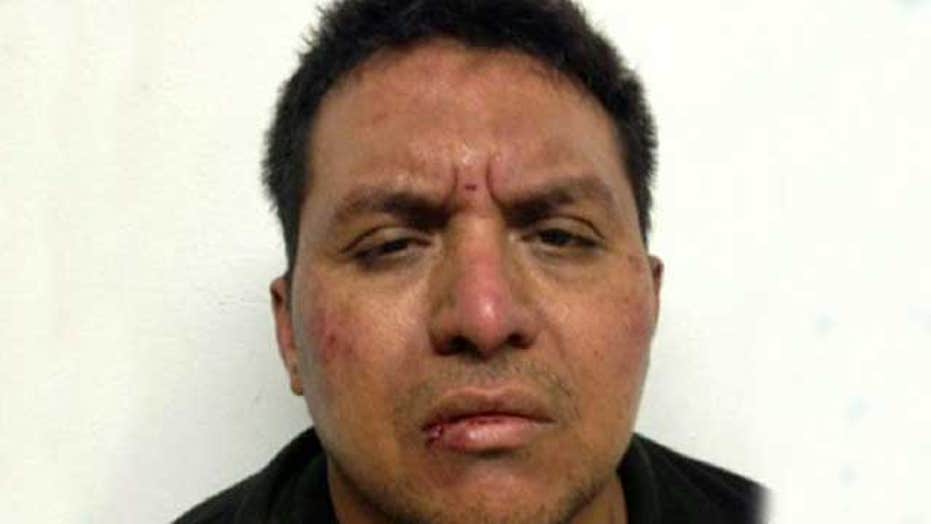 Zeta head could be extradited to U.S.

The notoriously brutal leader of Mexico's feared Zetas drug cartel was captured in a pickup truck near the border city of Nuevo Laredo Monday, officials said, in what is the first major blow against an organized crime leader by a Mexican administration struggling to drive down persistently high levels of violence.

Miguel Angel Trevino Morales, 40, was also found with $2 million in cash as he was captured by Mexican Marines on a dirt road in the countryside outside of Nuevo Laredo, a city opposite the Texas border which has long served as the Zetas' base of operations. The truck was halted by a Marine helicopter and Trevino Morales was taken into custody along with a bodyguard and an accountant and eight guns, government spokesman Eduardo Sanchez told reporters.

Sanchez said the Marines had been watching rural roads between the Texas border states of Coahuila, Nuevo Leon and Tamaulipas for signs of Trevino Morales, who is charged with murder, torture, kidnapping and other crimes.

The Zetas leader and his alleged accomplices were flown to Mexico City, where they are expected to eventually be tried in a closed system that usually takes years to prosecute cases, particularly high-profile ones.

"The Drug Enforcement Administration congratulates the Government of Mexico on the arrest of Miguel Trevino Morales," the DEA said in a statement released Tuesday. "Trevino Morales is of one of the most significant Mexican cartel leaders to be apprehended in several years and DEA will continue to support the Government of Mexico as it forges ahead in disrupting and dismantling drug trafficking organizations."

Trevino Morales, known as "Z-40," is uniformly described as one of the two most powerful cartel heads in Mexico, the leader of a corps of special forces defectors who went to work for drug traffickers, splintered off into their own cartel in 2010 and metastasized across Mexico, expanding from drug dealing into extortion, kidnapping and human trafficking.

Along the way, the Zetas authored some of the worst atrocities of Mexico's drug war, leaving hundreds of bodies beheaded on roadsides or hanging from bridges, earning a reputation as perhaps the most terrifying of the country's numerous ruthless cartels.

On Trevino Morales' watch, 72 Central and South American migrants were slaughtered by the Zetas in the northern town of San Fernando in 2010, authorities said. By the following year, federal officials announced finding 193 bodies buried in San Fernando, most belonging to migrants kidnapped off buses and killed by the Zetas for various reasons, including their refusal to work as drug mules.

Trevino Morales is charged with ordering the kidnapping and killing of the 265 migrants, Sanchez said.

President Enrique Pena Nieto came into office promising to drive down levels of homicide, extortion and kidnapping but has struggled to make a credible dent in crime figures. And his pledge to focus on citizen safety over other crimes has sparked worries among U.S. authorities that he would ease back on predecessor Felipe Calderon's U.S.-backed strategy aimed above all at decapitating drug cartels.

The arrest of Trevino, a man widely blamed for both massive northbound drug trafficking and the deaths of untold scores of Mexicans and Central American migrants, will almost certainly earn praise from Pena Nieto's U.S. and Mexican critics alike, but experts warned that the arrest is unlikely to quell violence.

"It's another link in the destruction of the Zetas as a coherent, identifiable organization," said Alejandro Hope, a former member of Mexico's domestic intelligence service. "There will still be people who call themselves Zetas, bands of individuals who maintain the same modus operandi. There will be fights over illegal networks."

Trevino Morales' capture adds to the long list of Zetas' leaders who have been arrested or killed in recent years, including Zeta head Heriberto Lazcano Lazcano, whose fatal shooting by authorities last year left Trevino Morales in charge.

The debilitation of the Zetas has been widely seen as strengthening the country's most-wanted man, Sinaloa cartel head Joaquin "El Chapo" Guzman, who has overseen a vicious turf war with the Zetas from hideouts believed to lie in rugged western Mexico.

"El Chapo is greatly strengthened because he will now have access to the crown jewel of narco-trafficking, Nuevo Laredo," said George Grayson, an expert on the Zetas and professor of government at the College of William & Mary.

Trevino Morales is expected to be succeeded by his brother, Omar, a former low-ranking turf boss seen as far weaker than his older brother.

Miguel Angel Trevino Morales began his career as a teenage gofer for the Los Tejas gang, which controlled most crime in his hometown across the border from Laredo, Texas. He soon graduated from washing cars and running errands to running drugs across the border, and was recruited into the Matamoros-based Gulf cartel.

Trevino Morales' brother, sister and mother lived in Dallas but he had many relatives around Nuevo Laredo and, while moving frequently to avoid authorities, he was believed to often return to his hometown, the U.S. official said.

Trevino Morales joined the Zetas, a group of Mexican special forces deserters who defected to work as hit men and bodyguards for the Gulf cartel in the late 1990s.

Stories about the brutality of "El Cuarenta," or "40" as Trevino Morales became known, quickly become well-known among his men, his rivals and Nuevo Laredo citizens terrified of incurring his anger.

One technique favored by Trevino Morales was the "guiso," or stew, in which enemies would be placed in 55-gallon drums and burned alive, said a U.S. law-enforcement official in Mexico City, who spoke on condition of anonymity because of the sensitivity of the topic. Others who crossed the commander would be beaten with wooden planks, the official said.

Around 2005, Trevino Morales was promoted to boss of the Nuevo Laredo territory, or "plaza" and given responsibility for fighting off the Sinaloa cartel's attempt to seize control of its drug-smuggling routes, according to U.S. and Mexican officials. He orchestrated a series of killings on the U.S. side of the border, several by a group of young U.S. citizens who gunned down their victims on the streets of the American city.

In 2006, the Gulf Cartel and the Zetas defeated the Sinaloa cartel in Nuevo Laredo, a victory that emboldened them as they began spreading south to towns and cities that had never before seen extensive organized crime. They set up criminal networks to control transit routes for drugs, migrants, extortion, kidnapping, contraband of pirated DVDs and CDs and countless other criminal activities, intimidating local residents and committing gruesome murders as an example to the uncooperative.

According to the U.S. official, Trevino Morales was in charge of Nuevo Leon, Piedras Negras and other areas until March 2007, when he was sent to the city of Veracruz following the death of a leading Zeta in a gunbattle there.

That same year, Trevino Morales and Lazcano began pushing for independence from the Gulf cartel after cartel head Osielo Cardenas Guillen's extradition to the U.S.

The Zetas split from the Gulf cartel and by 2008 had operations in 28 major Mexican cities, according to an analysis by Grupo Savant, a Washington-based security think tank.

In February 2008, Lazcano sent Trevino Morales to Guatemala, where he was responsible for eliminating local competitors and establish Zetas control of smuggling routes. Trevino Morales was then named by Lazcano as national commander of the Zetas across Mexico despite his lack of military background, earning him the resentment of some of the original ex-military members of the Zetas, the official said.

The promotion involved Trevino Morales in virtually every decision by the Zetas, the official said.

Trevino rose to the top of the Zetas last year after leader Lazcano died in a shootout with Mexican marines in Coahuila state.

Trevino Morales was indicted on drug trafficking and weapons charges in New York in 2009 and Washington in 2010, and the U.S. government issued a $5 million reward for information leading to his arrest.

According to the indictments, Trevino Morales coordinated the shipment of hundreds of pounds of cocaine and marijuana each week from Mexico into the U.S., much of which had passed through Guatemala. He also moved bulk shipments of dollar bills back into Mexico, the documents say.