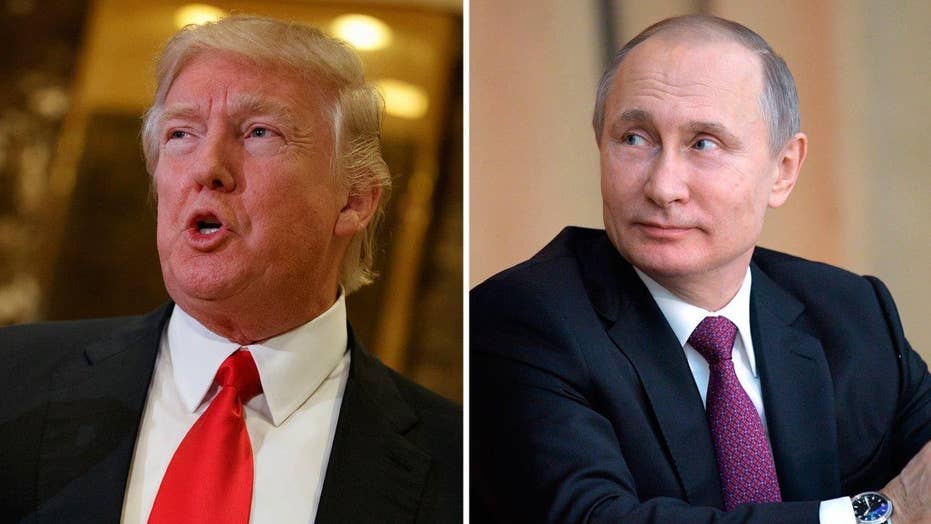 MOSCOW – Exulted by Donald Trump's victory in the U.S., the Kremlin is counting the days to his inauguration and venting its anger at Barack Obama's outgoing administration, no holds barred.

Careful not to hurt chances for a thaw in U.S.-Russia relations, President Vladimir Putin and other Russian officials have deferred questions about their plans for future contacts with Trump and any agenda for those talks until he takes office on Friday.

Trump's open admiration of Putin has brought wide expectations of improved Moscow-Washington relations, but Trump has not articulated a clear Russia policy. His Cabinet nominees include both a retired general with a hawkish stance on Russia and an oil executive who has done extensive business in Russia.

At the same time, Russian officials are blasting the outgoing U.S. administration in distinctly undiplomatic language, dropping all decorum after Obama hit Moscow with more sanctions in his final weeks in office.

Moscow calls Obama's team a "bunch of geopolitical losers" engaged in a last-ditch effort to inflict the maximum possible damage to U.S.-Russia ties to make it more difficult for Trump to mend the rift.

In a clear effort to avoid risking a rapprochement with Trump, Putin showed a remarkable restraint when the U.S. expelled 35 Russian diplomats over accusations of meddling in the U.S. election campaign. Instead of a usual tit-for-tat response, Putin invited U.S. diplomats' children to a New Year's party at the Kremlin.

Trump's national security adviser, Michael Flynn, and Russia's ambassador to the U.S. were in frequent contact in recent weeks, including on Dec. 29, the day Obama hit Moscow with sanctions in retaliation for election-related hacking, according to a senior U.S. official. That call and others suggest that the incoming administration is already laying the groundwork for a possible thaw with Moscow.

While Putin and his lieutenants hope Trump will open up to Russia, they know any attempt to fix ties will face massive obstacles, including possible strong resistance in the U.S. Congress.

"Any future contacts will have to be prepared quite accurately and thoroughly, as they would follow a tense period," Putin spokesman Dmitry Peskov told reporters.

Fyodor Lukyanov, chair of the Council for Foreign and Defense Policies, a group of Russian foreign policy experts, said Syria is one area where a U.S.-Russian rapport is likely.

During the call with Flynn, the Russian ambassador invited U.S. officials to a conference on Syria to be held in Kazakhstan later this month, according to a transition official, who was not authorized to publicly discuss the matter.

In an interview Friday with The Wall Street Journal, Trump said he might do away with Obama's sanctions if Russia works with the U.S. on battling terrorists and achieving other goals.

The Kremlin would be eager to embrace a U.S. offer of cooperation on Syria. Obama's administration had refused to coordinate action against the IS with Russia, saying Moscow was bent on shoring up Syrian President Bashar Assad.

The complexity of the conflict in Syria — where opposition groups backed by regional players are pitted against Assad's troops and often fight each other — makes hopes for quick progress elusive.

"Russia and the United States are important players (in Syria) but not the only ones," Lukyanov said.

He noted that nuclear arms control is another possible area where Moscow and Washington could try to find common ground. While new arms control treaties are unlikely, the two countries may try to find ways to increase global stability, Lukyanov said.

Putin has pushed for the U.S. to recognize Moscow as an equal global heavyweight and to acknowledge that Russia's ex-Soviet neighbors are in its sphere of "vital interests" — demands rejected by the West. Many in Russia hope that Trump could be more inclined to strike a "grand bargain" with Putin, carving up spheres of influence and helping cement Russia's role as a global power.

Alexander Lebedev, a multimillionaire Russian owner of Britain's Evening Standard and Independent newspapers, believes that Putin wants a "big deal" that would envisage cooperation in Syria and possible cooperation in other spheres, including the fight against international financial crime.

"$1 trillion a year is stolen by global banks and companies and moved offshore," Lebedev said, adding that Russia and the U.S. could launch a worldwide crackdown on corrupt business practices.

U.S.-Russian relations have sunk to a post-Cold War low over Russia's 2014 annexation of Ukraine's Crimean Peninsula and support for a pro-Russian insurgency in eastern Ukraine. A 2015 peace deal helped end large-scale battles in eastern Ukraine, but clashes have continued and attempts at a political settlement have stalled. The U.S. and the European Union have slapped Russia with economic sanctions and made their lifting contingent on the peace deal's progress.

While the Kremlin counts on Trump to roll the sanctions back, many observers are skeptical.

"In the current atmosphere, it's very difficult to imagine how Trump could start canceling the sanctions," Lukyanov said.

U.S. allegations of Russian meddling in the U.S. election top the list of irritants.

U.S. intelligence officials' accusations that Russian hackers — acting on Putin's orders — interfered into the vote to help Trump win have put the U.S. president-elect in a difficult position. Trump has grudgingly conceded that Russia was likely responsible for hacking the Democratic National Committee, but emphasized there was no evidence that hacking affected the U.S. election results.

The Kremlin has rejected the hacking accusations and also hotly denied reports that it has collected compromising information about Trump.

Aware that an open show of support for Trump would only make it more difficult for him to restore ties, Russian officials have mostly focused on blasting Obama's administration.

Konstantin Kosachev, the head of foreign affairs committee in the upper house of parliament, described the White House's decision to expel Russian diplomats as an "agony of not even lame ducks, but political corpses."

Zakharova charged that "Obama and his illiterate foreign policy team have dealt a crushing blow to America's prestige and leadership" and described his administration as "a bunch of geopolitical losers, enraged and shortsighted."