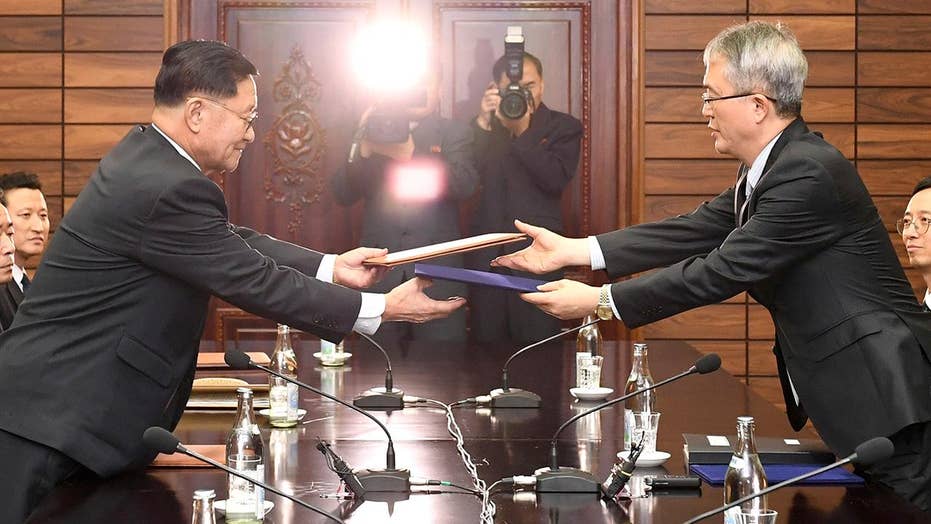 Greg Palkot reports on the latest round of talks on North Korea's participation in Pyeongchang.

Kim Jong Un's favorite girl band may be among the 140-member art troupe North Korea agreed on Monday to send to the Winter Olympics in South Korea.

Delegations from the North and South met Monday and announced the art troupe would include the Samjiyon band, the 80-member North Korean orchestra, and 60 other singers and dancers that will perform in Seoul and Gangneung, where some of the Olympic competitions will be held.

The art troupe would be larger than the previous six that North Korea has sent to South Korea since 1985. The North last sent such a group in 2002, according to Seoul's Unification Ministry.

Officials from the Koreas met Monday to work out details about North Korea's plan to send an art troupe to the South during next month's Winter Olympics. Hyon Song Wol, the head of the Moranbong Band, second right, also attended the meeting. (South Korea Unification Ministry)

The singers could also include the Moranbong Band, the all-girls group that was hand-picked by Kim in July 2012. Though the joint statement didn’t specifically mention the group, Hyon Song Wol, the ensemble’s leader, was one of the four people in North Korea’s delegation at Monda’s meeting — fueling rumors the Moranbong Band will be making an appearance at the Feb. 9-25 Pyeongchang Winter Games.

The band, dubbed “North Korea’s only girl group,” is known for their western-style outfits, music promoting the regime’s propaganda and odes to Kim. One of their hits include a cover version of the “Rocky” theme song, Yonhap News Agency reported.

Experts believe North Korea has an ulterior motive in sending its art troupe to grace the Olympic stage. They suspect the Hermit Kingdom may use the sweet singing and dancing to promote a softer image of North Korea as the regime faces harsh international sanctions imposed after its series of missile launches and latest nuclear test, according to Yonhap.

The North Korean art troupe being sent South is expected to play folk songs and other classic masterpieces well-known to citizens in both Koreas, a plan that would go with the theme of unification, chief South Korean delegate Lee Woo-sung said. He said more discussions are expected to work out details of North Korean performances.

Monday’s meeting was the second one conducted between the rival countries. The North and South met for the first time last week in more than two years. But over the weekend, North Korea’s state-run Korean Central News Agency indirectly threatened to pull its delegation heading to Olympics after South Korean President Moon Jae-in said President Trump deserved “big credit” for the recent talks between Pyongyang and Seoul.

"They should know that the train and bus carrying our delegation to the Olympics are still in Pyongyang,” the KCNA statement said.

The Winter Olympics in Pyeongchang will run between Feb. 9 and Feb. 25. (Reuters)

The North Korean delegation is expected to include officials, athletes, cheerleaders, journalists and a taekwondo demonstration team. North and South Korea also want to field a joint women’s hockey team at the Olympics, but they would need approval from the International Olympic Committee.