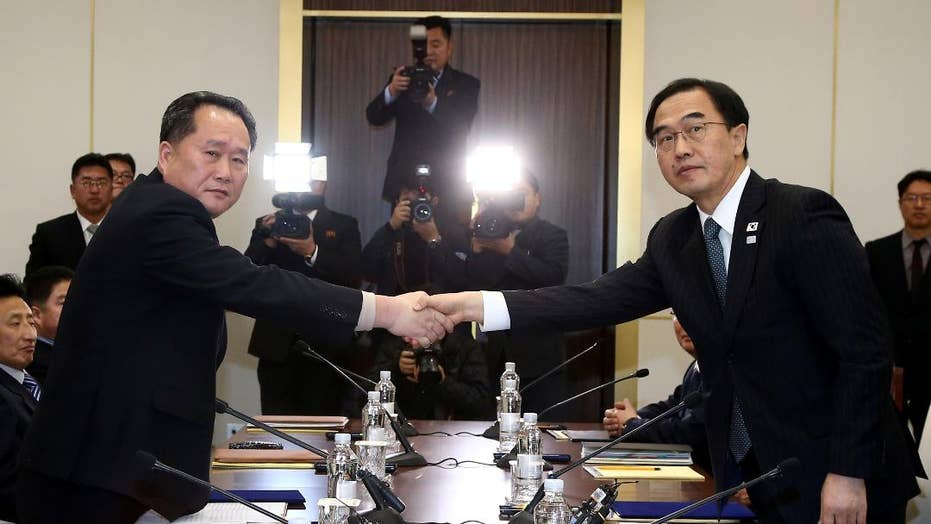 North and South Korea met for the first time in more than two years to discuss the North’s participation in the 2018 PyeongChang Winter Olympics. Here’s are the details surrounding the meeting and odd requests made from the North.

Kim Jong Un’s rumored ex-girlfriend and the leader of the regime’s only all-girl music group appeared at the meeting between the North and the South on Monday — one of the few images of Hyon Song Wol in public after years of speculation she was executed by the despot’s firing squad.

Hyon, the leader of the Moranbong Band, joined the four-member delegation Monday as part of the the talks to bring a 140-member art troupe to the Winter Olympics in Pyeongchang.

But before her unexpected appearance Monday, Hyon, said to be in her 40s, was reportedly Kim’s ex-lover. The former couple met in the early 2000s and dated before Kim’s father and former North Korean leader Kim Jong Il told him to end the relationship for unspecified reasons, Chosun Ilbo reported.

Hyon reportedly married a North Korean soldier while Kim married Ri Sol Ju. There were rumors Kim and Hyon continued to have an affair over the years.

The despot later hand-selected her in 2012 to be part of his beloved girl band. But a year later, reports surfaced that Hyon and a dozen other North Korean performers were executed by Kim’s firing squad for making and distributing pornographic videotapes, according to Chosun Ilbo.

The execution reports turned out to be false. In 2015, Hyon appeared in public in Beijing when the Moranbong Band was sent on a six-day “friendship” tour. The ex-girlfriend greeted reporters and grinned when asked about rumors of her death.

"Where do you come from?" she replied to a reporter, according to Yonhap.

Hyon Song Wol was seen in 2015 and didn't directly address rumors that she was executed by Kim's firing squad. (Reuters)

Hyon also wields some political power within the regime. She was promoted last year to the Central Committee of the Workers Party, the Korea Herald reported. She is also a colonel in the Korean People’s Army of the North.

Hyon’s appearance fueled rumors that “North Korea’s only girl group” — known for their western-style outfit, North Korean propaganda and odes to Kim — will also be attending the Olympic Games. One of the ensemble’s hits include a cover version of the “Rocky” theme song, Yonhap reported.