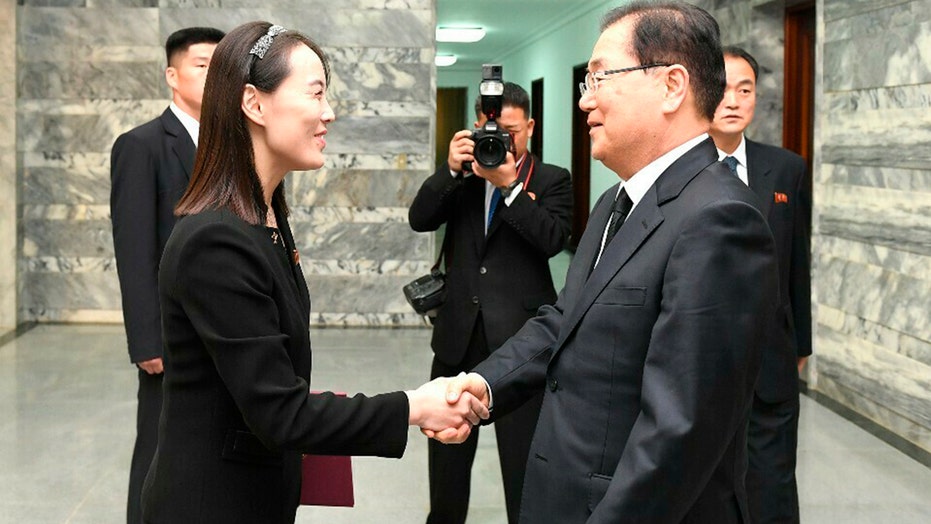 The younger sister of the North Korean leader made her first public appearance Monday in more than 50 days.

Kim Jong Un’s sister met with officials from South Korea Monday in the countries' shared Demilitarized Zone (DMZ), in her second public appearance this month following rumors she was ordered to lay low over the botched nuclear summit with the United States.

Kim Yo-jong, the sister of the North Korean leader, provided a letter to the South’s national security adviser Chung Eui-yong on Wednesday in which the regime expressed condolences for the death of former South Korean first lady Lee Hee-ho, who had visited North Korea a few times in the past.

The late South Korean president Kim Dae-jung, her husband, advocated for a policy that tried to encourage political reconciliation and economic cooperation with North Korea.

This was the second major appearance in two weeks for Kim's sister after she appeared at the country’s most important propaganda spectacle, the Mass Games. That appearance had been her first in public in more than 50 days.

She is a senior official of North Korea’s ruling party and is believed to be her brother’s closest confidant, accompanying him to his summits with President Donald Trump and South Korean President Moon Jae-in.

However, she was left out of her brother’s trip to Russia in April for a summit with President Vladimir Putin, leading to speculation she had been sidelined following the collapse of the summit with Trump in February.

During the meeting on Wednesday, the sister expressed hope that the two countries would “continue cooperation to honor the will of the late first lady Lee Hee-ho, who dedicated herself to inter-Korean reconciliation and cooperation,” the New York Times reported.

Yet she didn’t bring any message from the North Korean leader to South Korean President Moon Jae-in despite the stalled nuclear talks. “Today, the South and North focused on cherishing memories and mourning (Lee),” Chung said.

But since the breakdown of nuclear talks with the U.S., North Korea stopped communications with the South while also resuming short-range missile tests in addition to threatening American and South Korean officials.

The South Korean president downplayed the significance of stalled talks in a recent speech in Oslo, saying the countries need time to “understand each other thoroughly.”

He added that would hope to see another summit soon, but it remains unclear if that’s viable.

“That’s up to Chairman Kim,” he said.