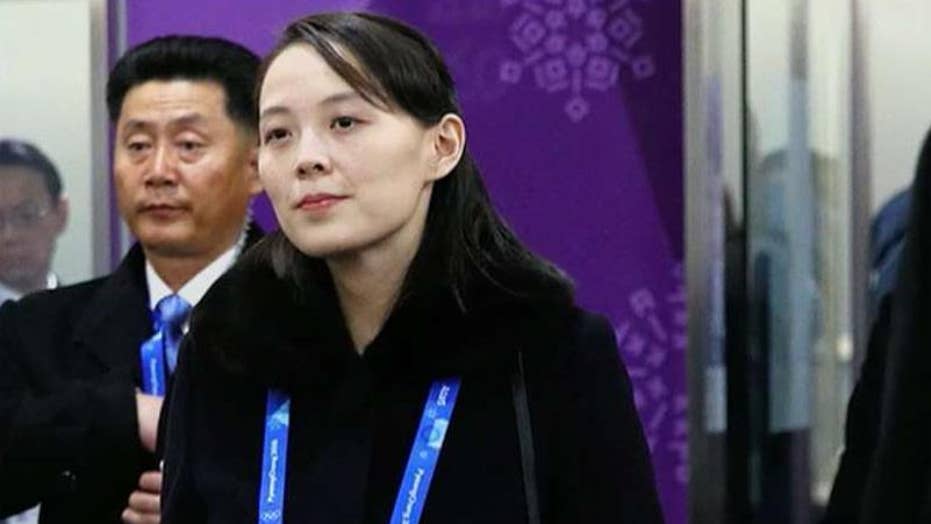 News outlets are under fire for glowing coverage of Kim Yo Jong's presence at the Winter Olympics in Pyeongchang, South Korea; Dr. Sebastian Gorka and Amb. John Bolton react on 'Hannity.'

A Kim Jong Un impersonator looking for a Valentine’s Day love connection briefly danced with North Korea's “army of beauties” at a Winter Olympics hockey game -- but the bogus despot's charms were for naught and he was quickly, and unceremoniously, thrown out of the arena.

The impersonator, who calls himself Howard from Australia, appeared at the Korea-Japan women’s ice hockey game on Wednesday donning a long black overcoat and glasses while sporting the despot’s trademark haircut. It was Howard's second appearance at these Olympics. He first appeared during the Opening Ceremony with a President Trump lookalike -- though he was also quickly evicted from that event, too.

Howard walked in front of the North Korean cheer squad in the stands Wednesday and waved a unification flag with a gleeful smile on his face. The impersonator also reportedly had a seat nearby.

But security personnel at the Pyeongchang Winter Olympics quickly stepped in and moved the Kim lookalike out of the arena as a crowd of attendees watched.

“This is how I look,” the impersonator said as police led him into a staff room.

Officials surrounded him in a hall outside of the seating area to prevent him from going back into the ice hockey game.

Howard later told The Sun he was late to the ice hockey game and headed straight for the cheerleaders when he entered the arena.

The "Kim" impersonator held up a unification flag after being kicked out of a ice hockey game. (Reuters)

"They looked really surprised and shocked. Some of them laughed, and got it, but most of them were totally shocked and I was told to sit down by a few heavies,” he recalled.

He said “a few heavies,” who he suspects to be North Korean delegates, were mad and rushed over to remove him.

"They dragged me out and they kicked me in the shins and were shouting something really angrily in Korean,” he said.

Howard said police detained him for about 30 minutes.

The Kim lookalike said he was detained by police for about 30 minutes. (Reuters)

"I thought I'd turn up in character and give the games a little bit more spice, after all, South Korea is a democracy, with freedom of speech and I think we need to satirise the whole situation," Howard said.

Howard's first appearance as Kim Jong Un came with the real dictator's sister, Kim Yo Jong, in attendance at the Opening Ceremony.

The "Kim" lookalike and a President Trump impersonator were first seen at the Winter Olympics opening ceremony. (Reuters)

“We wanted to surprise everyone and bring world peace and then we’re being escorted out by security guards, which I think is really unfair,” the Kim-personator told Reuters at the time. “Doesn’t everyone want peace?”