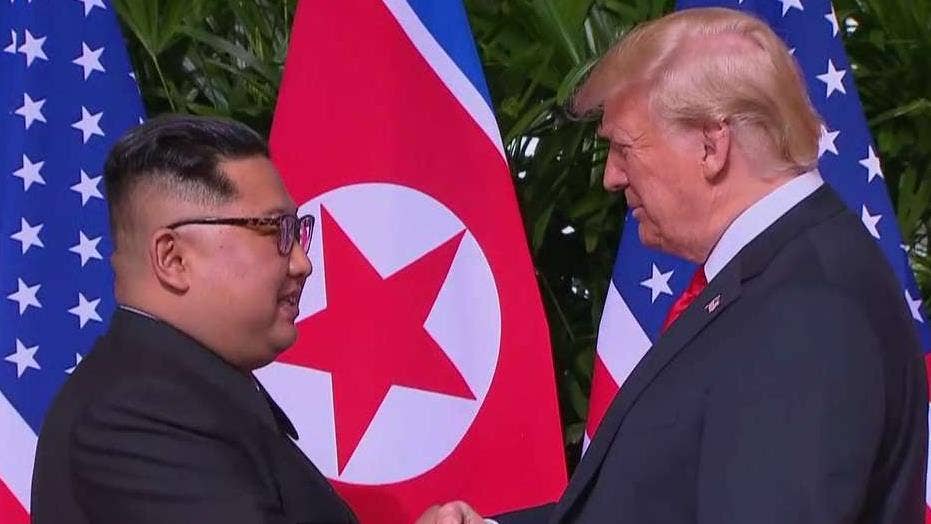 North Korean leader Kim Jong Un is expected to ring in the New Year with an annual address to highlight top priorities he has for the rogue, but increasingly less hostile, nation amid a deadlock in denuclearization talks with the United States.

Kim’s New Year’s Day address -- his seventh since taking power -- is set to air on North Korea’s state-run television network. The country rang in the new year at midnight Tuesday with performances and an impressive fireworks display in Pyongyang as a massive throng of North Koreans watched in a square.

Among the topics the leader is expected to address Tuesday are the state -- and perhaps future -- of denuclearization talks with the U.S., relations with South Korea and the Hermit Kingdom's economy, which has been tanked by sanctions from the U.S. and international community after years of nuke tests.

Kim Jong Un and U.S. President Trump could meet for a second summit in 2019. (AP)

North Korea is entering the fourth year of a five-year economic plan that Kim announced with great fanfare at a rare congress of his ruling party in 2016. If precedent is any indication, the North Korean leader will go into some detail outlining, sector by sector, the country's successes so far and emphasizing what remains to be done. This part of the speech is usually couched in deliberately vague, broad or aspirational language and is directed at domestic party leadership.

Kim has said he still stands behind the denuclearization commitment he made to President Trump during the pair's historic Singapore summit, but little progress has been made since June.

The New Year's speech gives Kim an opportunity to set the goalposts and to try to further detach Trump from his advisers before a possible second summit Trump teased in November.

On Sunday, Kim sent a letter to South Korean President Moon Jae-in calling for more summits in 2019 between the once-rival states.

Moon's office said Kim also expressed regret he couldn't make it to South Korea for a planned visit by the end of December, which was pledged by both leaders during their previous summit in Pyongyang in September.