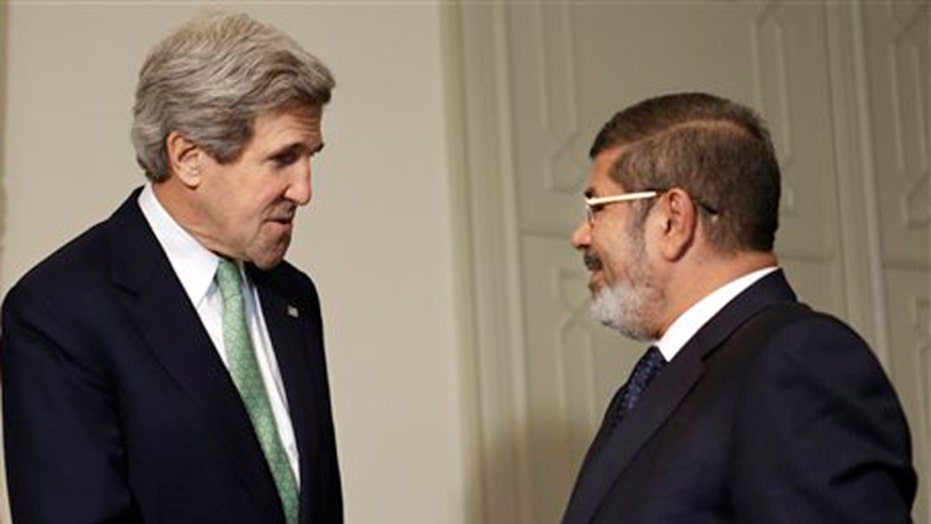 Why is the US funding its foes?

As Secretary of State John F. Kerry release $250 million in aid to Egypt, critics wonder why we're investing so much in a government that doesn't like the US

However, Kerry also said the Obama administration will hold Morsi, who came to power in June as Egypt's first freely elected president, to his commitment.

“The American people want to see the political and economic success of our long-time partners and friends in Egypt,” Kerry said in Cairo. “We look forward to continuing to work closely with all Egyptians. But “it is clear that more hard work and compromise will be required to restore unity, political stability and economic health to Egypt.”

Egypt was one of Kerry's first stops on his first tour of Arab nations since becoming secretary. Kerry will be meeting with Palestinian leader Mahmoud Abbas, in the Saudi capital Riyadh Monday.

Kerry's two days of meetings in Egypt have proven tense and fraught with political peril.

Kerry replied: "I expect a lot from you.”

The secretary of state met Saturday with Foreign Minister Mohamed Amr, who told Kerry that Egypt expects long-time friend the United States to support the most populous Arab nation during its current economic woes.

Kerry also is meeting privately with some opponents of Morsi’s Islamist government who had refused to meet publicly with the American delegation.

Egypt is still trying to make good on a $4.8 billion loan from the International Monetary Fund. An agreement would unlock more of the $1 billion in U.S. assistance promised by President Obama last year and set to begin flowing with Kerry's announcement.

"The United States can and wants to do more," Kerry said. "Reaching an agreement with the IMF will require further effort on the part of the Egyptian government and broad support for reform by all Egyptians.”

Kerry cited Egypt's "extreme needs" and Morsi's "assurances that he plans to complete the IMF process" when he told the president that the U.S. would provide $190 million of a long-term $450 million pledge "in a good-faith effort to spur reform and help the Egyptian people at this difficult time."

Separately, the top U.S. diplomat announced $60 million for a new fund for "direct support of key engines of democratic change," including Egypt's entrepreneurs and its young people. Kerry held out the prospect of U.S. assistance to this fund climbing to $300 million over time.

Recapping his meetings with political figures, business leaders and representatives of outside groups, Kerry said he heard of their "deep concern about the political course of their country, the need to strengthen human rights protections, justice and the rule of law, and their fundamental anxiety about the economic future of Egypt."

Those issues came up in "a very candid and constructive manner" during Kerry's talks with Morsi.

Syria and Iran also came up, according to officials.

With parliamentary elections in April approaching and liberal and secular opponents of Morsi's Muslim Brotherhood saying they will boycott, Kerry called the vote "a particularly critical step" in Egypt's democratic transition.

Officials in the Egyptian presidency said Kerry stressed the need for consensus with the opposition in order to restore confidence in Egypt that it can ride out the crisis. Morsi was reported to have expressed the importance of Egypt's relationship with the United States, which is based on "mutual respect," and focused on the importance of the democratic process in building a strong and stable nation.

Kerry made clear that in all his meetings, he conveyed the message that Egyptians who rose up and overthrew Mubarak "did not risk their lives to see that opportunity for a brighter future squandered."

He also told the country's bickering politicians that they must overcome differences to get Egypt's faltering economy back on track and maintain its leadership role in the volatile Middle East.

The U.S. is deeply concerned that continued instability in Egypt will have broader consequences in a region already rocked by unrest.

U.S. officials said Kerry had planned to stress the importance of upholding Egypt's peace agreement with Israel, cracking down on weapons smuggling to extremists in the Gaza Strip and policing the increasingly lawless Sinai Peninsula while continuing to play a positive role in Syria's civil war.

The impact of his message of unity to the opposition coalition seemingly was blunted when only six of the 11 guests invited by the U.S. Embassy turned up for the Saturday session and three of those six said they still intended to boycott the April parliamentary election, according to participants.

Kerry said that the U.S. would not pick sides in Egypt, and he appealed to all sides to come together around human rights, freedom and speech and religious tolerance.

In an apparent nod to the current stalemate in Washington over the U.S. federal budget, Kerry acknowledged after meeting with Amr that compromise is difficult yet imperative.

"I say with both humility and with a great deal of respect that getting there requires a genuine give-and-take among Egypt's political leaders and civil society groups just as we are continuing to struggle with that in our own country," he said. "There must be a willingness on all sides to make meaningful compromises on the issues that matter most to all of the Egyptian people."

The opposition accuses Morsi and the Brotherhood of following in the footsteps of Mubarak, failing to carry out reforms and trying to install a more religiously conservative system.

Morsi's administration and the Brotherhood say their foes, who have trailed significantly behind Islamists in all elections since the uprising against Mubarak, are running away from the challenge of the ballot box and are trying to overturn democratic gains.

Fox News' James Rosen in Cairo and The Associated Press contributed to this report.