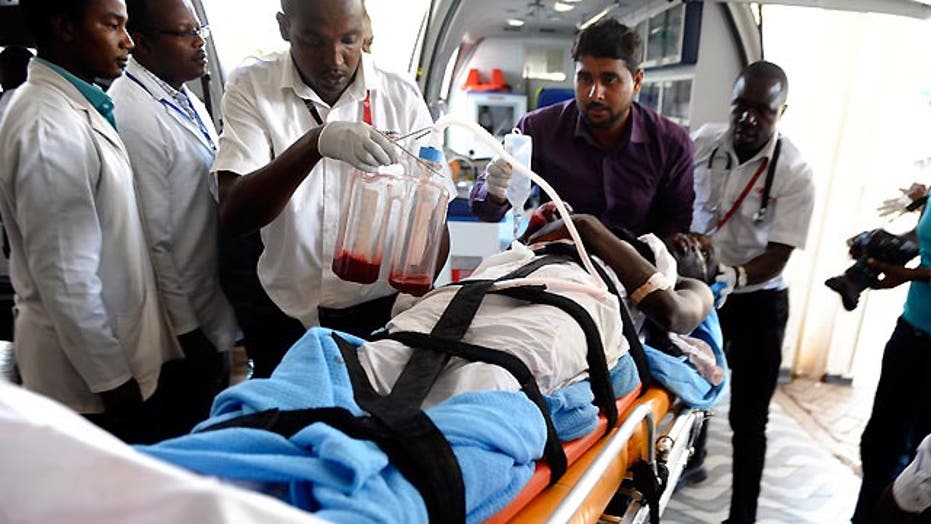 GARISSA, Kenya – The Islamic extremists who slaughtered 148 people at a college in northeast Kenya as they shouted "God is great" appeared to have planned extensively, even targeting a site where Christians had gone to pray, survivors said Friday.

Police on Friday were at the campus of Garissa University College, taking fingerprints from the bodies of the four assailants and of the students and security officials who died, for thorough identification purposes. The northeastern Kenyan town lacks the facilities to store all those bodies. In Nairobi, Kenya's capital, family members were lining up at a morgue where about 20 bodies had already been airlifted from Garissa.

Interior Minister Joseph Nkaissery updated the number of people killed by the gunmen to 148. He said 142 of the dead were students, three were policemen and three were soldiers.

One of the first things that the assailants did early Thursday, survivor Helen Titus said, was to head for a lecture hall where Christians were in early morning prayer.

"They investigated our area. They knew everything," Helen Titus told The Associated Press at a hospital in Garissa where she was being treated for a bullet wound to the wrist. Titus, , a 21-year-old English literature student, said she covered her face and hair with the blood of classmates and lay still at one point during al-Shabab's deadliest attack on Kenyan soil  in hopes the Islamic extremist gunmen would think she was dead.

The gunmen also told students hiding in dormitories to come out, assuring them that they would not be killed, said Titus, who wore a patient's gown as she sat on a bench in the hospital yard.

"We just wondered whether to come out or not," she said. Many students did, whereupon the gunmen started shooting men, saying they would not kill "ladies," Titus said. But they also shot women and targeted Christians, said Titus, who is a Christian.

Some Kenyans were angry that the government didn't take sufficient security precautions. The attack came six days after Britain advised "against all but essential travel" to parts of Kenya, including Garissa.

One day before the attack, President Uhuru Kenyatta dismissed the warning as well as an Australian one pertaining to Nairobi and Mombasa, saying: "Kenya is safe as any country in the world. The travel advisories being issued by our friends are not genuine."

Kenyatta would have been mindful that previous travel warnings, like for popular Kenyan beach areas, have hurt the country's tourism industry.

One man posted a photo on Twitter showing about 100 bodies lying face-down on a blood-smeared courtyard with the comment: "Our inaction is betrayal to these Garissa victims

Also Friday, a small group of male demonstrators walked down a main road in Garissa with signs that read "We are against the killing of innocent Kenyans!!!! We are tired!!" and "Enough is enough. No more killing!! We are with you, our fellow Kenyans."

"We feel very sorry for them and we condemn the attack," said demonstrator Abdullahi Muktar.

Elsewhere in Garissa, there was activity in a military-controlled area where medical vehicles and a UNHCR truck made their way in and out, and some civilians, possibly relatives of the dead, gathered. Security was tight at the gate. A Garissa University College bus was parked outside.

At one point, a group approached the gate and was blocked by soldiers. Several women began shrieking and collapsed in apparent grief in the dust for several minutes. A bystander said the son of one of the women had died in the attack.

The masked attackers -- strapped with explosives and armed with AK-47s -- singled out non-Muslim students at Garissa University College and then gunned them down without mercy, survivors said. The gunmen took dozens of hostages in a dormitory as they battled troops and police before the operation ended after about 13 hours, witnesses said.

Al-Shabab spokesman Ali Mohamud Rage said fighters from the Somalia-based extremist group were responsible. The al-Qaeda-linked group has been blamed for a series of attacks in Kenya, including the siege at the Westgate Mall in Nairobi in 2013 that killed 67 people, as well as other violence in the north. The group has vowed to retaliate against Kenya for sending troops to Somalia in 2011 to fight the militants staging cross-border attacks and kidnappings.