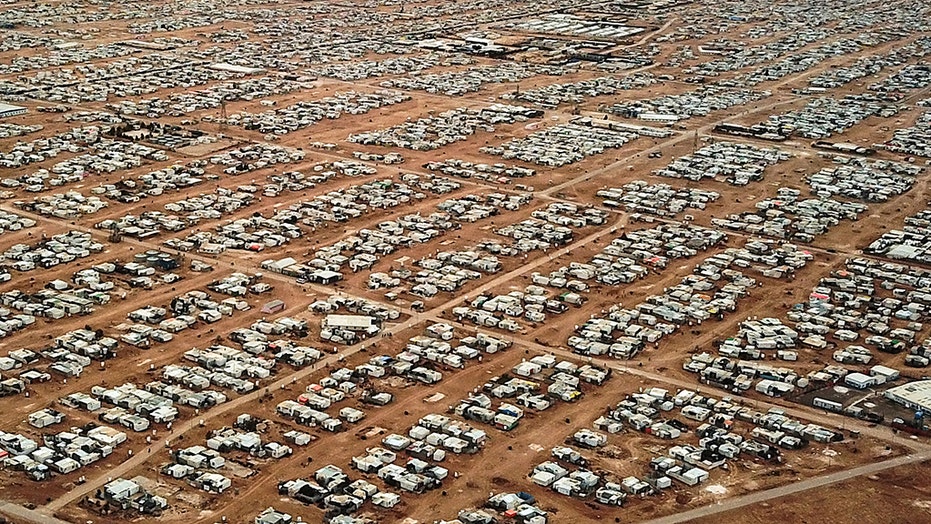 AMMAN, JORDAN – The Arab Spring, once a moment of eternal hope for freedom and pluralism, rocked the Muslim world in the winter and spring of 2011.

One by one, longtime dictators and strongmen from Libya to Egypt to Tunisia succumbed to popular protests, stepped aside, or were violently overthrown.

Syria’s Bashar al-Assad has managed to cling to power while his country has suffered a devastating civil war that remains ongoing and has killed more than 500,000 people and displaced more than 5.6 million Syrians since the war began in 2011.

Nestled among this turbulent region is the Kingdom of Jordan.

A view of Zaatari refugee camp, located in north Jordan close to the border with Syria, was opened in 2012.  (Valery SharifulinTASS via Getty Images)

Jordan experienced its own Arab Spring protest movement in early 2011 as thousands took to the streets demanding better jobs and an end to government corruption. Although there were minor clashes between protesters and security forces, the Jordanian monarchy displayed great restraint in its use of force and was largely able to escape the worst of the region-wide movement.

While the Kingdom has remained afloat as neighboring Syria and Iraq faced civil war and the rise of ISIS, Jordan is on the frontline as millions from across the war-torn region seek refuge in one of the only stable countries they can access.

Jordan’s dangerous geopolitical position, surrounded by civil wars and taking in overwhelming amounts of foreigners, could seriously threaten the survival of one of the only stable regimes left in the Middle East.

“Jordan is in the Middle of three wars: Syria, Iraq, and the Israeli-Palestinian conflict, and the refugee crisis has made Jordan very crowded,” Burhan Arab, a tour guide and Middle East historian who lives in central Amman, told Fox News. “Jordan is very strategically important for the U.S. in the Middle East and this demographic explosion is a major problem for Jordan and the entire region."

An overwhelming majority of these refugees, 81.4 percent are concentrated in urban centers such as Amman (pictured) (Fox News)

Compounding the influx of refugees flowing into Jordan is the uncertainty around who enters the country. Arab said that there are no doubt Jihadist elements among the refugee population, however, they do not have a centralized or hierarchical organizational structure to carry out coordinated terror attacks within Jordan.

Still, the crisis has had enduring effects.

Jordan has the second-highest refugee population in the world relative to its native population, with 89 refugees per 1,000 inhabitants, according to the United Nations Refugee Agency and nearly 30 percent of Jordan’s total population is foreign-born. There are currently 753,376 registered refugees in Jordan, with over 662,569 Syrians, or nearly 10 percent of Jordan’s population, who fled from Assad’s indiscriminate repression.

The government estimates the number is much higher at close to 2 million.

An overwhelming majority of these refugees, 81.4 percent are concentrated in urban centers such as Amman, and 85 percent live below the poverty line. Most of the refugees living in cities rely on themselves or humanitarian assistance to survive.

“Overcrowded cities are a symptom of a larger problem in Jordan – the budget is strapped, services are strained,” Ben Fishman, former National Security Council advisor in the Obama administration, told Fox News.

BEN STILLER ADVOCATES FOR SYRIAN REFUGEES IN EMOTIONAL TESTIMONY, URGES LAWMAKERS TO 'NOT LOOK AWAY'

“The economy can’t function at an ideal level and job creation and growth suffer when paying for the services of an increased population,” Fishman, also a senior fellow at The Washington Institute, added.

“The longer the Syrian refugees stay in Jordan, the more social pressures Jordan will face as the refugees take jobs and draw on already stretched services. It will test Jordan’s traditional hospitality toward refugees."

Since 2016, the Jordanian government has provided more than 100,000 work permits to Syrian refugees, allowing them to provide for their families. The noble gesture is not without its consequences.

Many Jordanian natives feel the pressure of overcrowded metropolitan areas particularly during a time when employment opportunities remain scarce. Jordan is one of the world’s most resource-poor nations and is heavily dependent on foreign aid with a nearly 20 percent unemployment rate.

Mohammad Murshed, an IT consultant, desperately wants to obtain a U.S. visa and get out of Jordan in search of a fulfilling career.

“There are no jobs here. There is nothing to do. The government can barely provide for Jordanians and there are millions of foreigners here now,” Murshed said.

Jordan has faced previous mass mobilization over the decades, but the monarchy’s restraint and limited use of repression, coupled with the protesters' refusal to call for the fall of the regime keep Jordan alive.

Any internal strife or popular uprising against the monarchy would be a severe blow to an important western ally, which hosts most of the anti-Islamic State coalition and remains at peace with Israel since a 1994 peace treaty.

Given the Kingdom’s critical geostrategic position, Jordan ranks as the third-largest recipient of U.S. foreign aid. In 2018, the U.S. agreed to provide Jordan with $1.2 billion annually in bilateral aid over five years, amounting to $6.3 billion through 2022. The strength of the Jordanian military is a key U.S. interest and Washington looks to Amman to provide regional stability and prevent the rise of Jihadist militants.

However, with no natural resource revenue, an economy dependent on foreign aid, and a growing population boom, the threat always remains to the fragile Kingdom.

Yet, despite the dangers faced by Jordanians, there is a palpable sense of pride and perseverance in the spirit of many.

“We are all ready to fight for Jordan, no matter what happens to us,” Mohmmad Shaheen, a bartender in Amman, told Fox News.