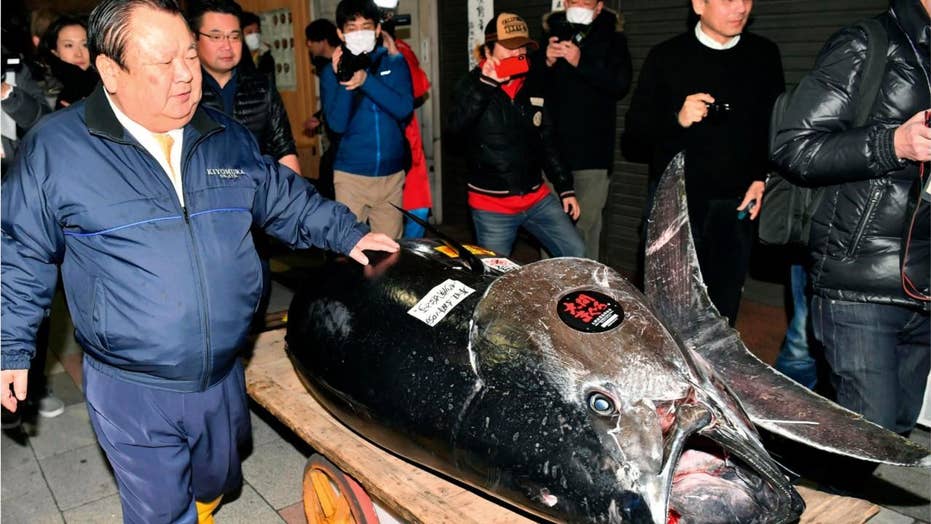 The winning sum for the prized and threatened species at the auction was more than double the previous record from the annual New Year auction, set in 2013.

Kimura, the owner of Kiyomura Corp who also runs the Sushi Zanmai chain, is a regular winner of the annual auctions.

He told Japanese broadcaster NHK that he was surprised by the price this year, but didn’t regret the purchase.

“The quality of the tuna I bought is the best,” he said.

GIANT ATLANTIC BLUEFIN TUNA WASHES UP IN SCOTLAND, SHOCKS BEACHGOERS: IT WAS AN 'IMPRESSIVE BEAST'

Kiyomura Corp. owner Kiyoshi Kimura, right, poses with the bluefin tuna he made a winning bid at the annual New Year auction, in front of his Sushi Zanmai restaurant in Tokyo Saturday, Jan. 5, 2019. The 612-pound (278-kilogram) bluefin tuna sold for a record 333.6 million yen ($3 million) in the first auction of 2019, after Tokyo's famed Tsukiji market was moved to a new site on the city's waterfront. (Koki Sengoku/Kyodo News via AP)

Bluefin tuna normally sells for up to $40 a pound, but the price steeply increases by the year’s end and reaches its highs for prized catches in Northern Japan.

Japan is the biggest consumer of bluefin tuna, leading to the overfishing of the species, with some experts warning that it faces extinction.

But the Japanese government, together with other countries, is backing plans to rebuild Pacific bluefin stocks of the fish, which is currently depleted by 96 percent from their pre-industrial levels.