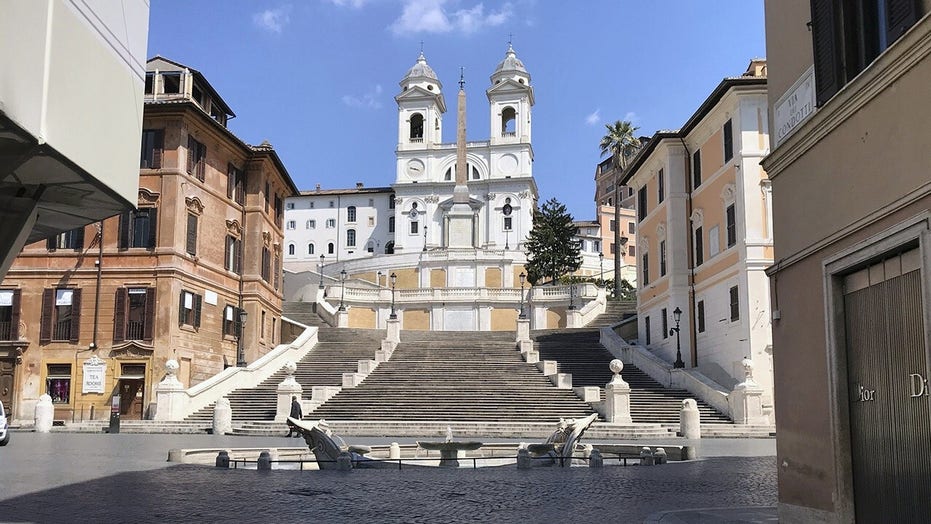 The Italian mafia is reportedly taking advantage of the coronavirus public health crisis to cement its power in the country and elsewhere in Europe, using its capital to relieve small businesses and buy groceries for the needy, all while continuing to traffic drugs under lockdown measures.

"The mafias always gravitate toward money," Francesco Lo Voi, an anti-mafia prosecutor in Palermo, Sicily, told National Public Radio. "And, they're constantly trying to improve their image in the eyes of ordinary citizens."

"The mafia boss presents himself as a benefactor," a Calabria-based anti-mafia investigator, Nicola Gratteri, also told NPR. "By providing a guy with 300 euros' worth of groceries, he makes sure that at the next election, the guy and his whole family will vote the way the mafioso wants them to."

City police officers with the help of a drone monitor citizens' movements in Grosseto, central Italy, Friday, March 20, 2020 as mayors of many towns in Italy are asking for ever more stringent measures on citizens’ movements to help contain the surging infections of the coronavirus.(Jennifer Lorenzini/LaPresse via AP)

ITALY HAS LOWEST DAILY CORONAVIRUS INFECTIONS IN TWO WEEKS -- BUT RISKS LOSING CONTROL OF SOUTH WITH FEARS OF RIOTS, LOOTING

Extending the initial shutdown of the northern Lombardy region, Prime Minister Giuseppe Conte implemented a nationwide lockdown on March 10, as since then, has periodically rolled out stricter measures, shutting down all non-essential business.

The economy forced to a standstill, the historically impoverished south has been the most hard-hit by the lockdown, where most of the estimated 3.5 million Italians who work off the books live and make a living in agriculture and construction.

The mafia has been reportedly swooping in on struggling local businesses, including hotels and restaurants who’ve been forced to shut their doors to save them from foreclosure, offering cash in exchange for stock. Mafiosos have historically used this tactic to eventually drive owners out, using the businesses as fronts to launder drug trafficking profits.

The most powerful branch of the Mafia, the 'Ndrangheta, based in Calabria, is believed to control at least 80 percent of the European cocaine market, and have used their profits to invest in funeral homes, delivery services, hospital laundries, gas stations and other essential businesses amid the crisis.

"At the end of the emergency, the criminal associations could have polluted the economy, controlling companies previously not infiltrated," Franco Gabrielli, head the Italian Civil Intelligence Service, said.

People shopping at Campo de Fiori fresh fruits and vegetables open market, as the statue of Giordano Bruno watches over the square, in Rome, Tuesday, April 7, 2020. Domenico Arcuri, Italy’s commissioner for fighting the COVID-19 virus, appealed to Italians ahead of the Easter weekend to not lower their guard and to abide by a lockdown now in its fifth week. (Mauro Scrobogna/LaPresse via AP)

Meanwhile, the Camorra mafia, based in Naples, has been taking advantage of relaxed law enforcement oversight at ports and in airports as travel has been mostly stifled amid the COVID-19 pandemic, journalist Roberto Saviano, who is the author of "Gomorrah: Italy's other Mafia,” told CNN.

"The organization will come to a company in crisis and say: 'We don't buy everything, but we will give you cash in exchange for shares -- to become part of your company,” Saviano said.

Faced with a mounting death toll, funeral processions in Italian have been banned since mid-March. A military convoy was tasked with removing bodies from overwhelmed morgues in the northern city of Bergamo, trucking the dead to outside towns to be cremated.

Meanwhile, the mafia in the Sicilian town of Messina flouted lockdown measures to hold a funeral procession for one on their own, a 70-year-old Mafioso, with dozens walking behind the hearse as it was carried through the streets.

Italy quickly became the hardest hit after the novel virus broke out of China where it first originated in the city of Wuhan in the Hubei province in late November. By Tuesday, it had become the third most-infected country in the world, recording at least 181,228 confirmed coronavirus cases, falling behind only the United States and Spain. Italy ranks second in the global tally of fatalities, with 24,114 deaths, according to Johns Hopkins University.