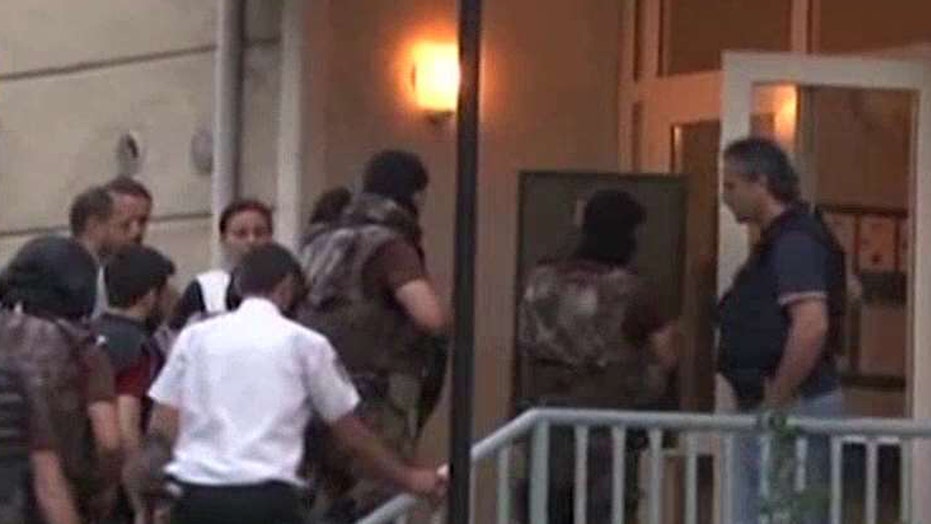 Arrests made in Istanbul in connection to airport attack

Officials have arrested 13 suspects following a series of raids

ISTANBUL – A Chechen terrorist responsible for training Russian-speaking militants for ISIS is believed to be the planner of Tuesday’s deadly Istanbul airport massacre that killed 43, according to Turkish media.

Akhmed Chatayev was identified on a UN sanctions list as an ISIS leader and was wanted by Russian authorities, Reuters reported citing the pro-government Yeni Safak newspaper. Chatayev had been wanted for links to terrorism since 2008, Russia Today reported, citing Russian news agency Ria Novosti.

Another attacker, also Chechen, was named as Osman Vadinov by the Hurriyet newspaper. Vadinov reportedly arrived in Turkey in 2015 from Raqqa, the Syrian capital of ISIS’ so-called caliphate. Turkish officials did not confirm either Chatayev or Vadinov as being involved in the attack.

Turkish police on Thursday linked the airport suicide bombers to Russia, Uzbekistan and Kyrgyzstan, and rounded up 13 more suspects in connection with the attack. State-run Anadolu Agency said the raids were carried out in Istanbul's Pendik, Basaksehir and Sultanbeyli neighborhoods, which span the city's Asian and European sides.

Authorities said all information suggests the shooting and suicide bombing attack by three assailants late Tuesday on one of the world's busiest airports was the work of ISIS.

Of those killed, 19 were foreign nationals, three of whom had dual citizenship. More than 230 people were hurt in the attack. Thursday marked a second day of funerals and mourning.

There was no immediate claim of responsibility by the militant group, which used Turkey as a crossing point to establish itself in neighboring Syria and Iraq. ISIS this week boasted to have cells in Turkey, among other countries.

In separate large-scale police operations, nine suspects believed to be linked to ISIS were also detained in the coastal city of Izmir. It was not clear if the suspects had any links to the carnage at the airport.

The report said the suspects were in contact with ISIS militants in Syria and were engaged in "activities that were in line with the organization's aims and interests," including providing financial sources, recruits and logistical support.

Days before the Istanbul attack, on June 25, security forces killed two suspected Islamic State militants who were trying to cross the border illegally and ignored orders from security forces to stop, according to local media reports.

One of the two militants was wanted by Turkey on suspicion that he would carry out suicide attacks in the capital Ankara or in the southern city of Adana, Anadolu said.

Turkey shares long, porous borders with both Syria and Iraq, where ISIS controls large pockets of territory. The government has blamed ISIS for several major bombings over the past year, including in the capital Ankara, and on tourists in Istanbul.