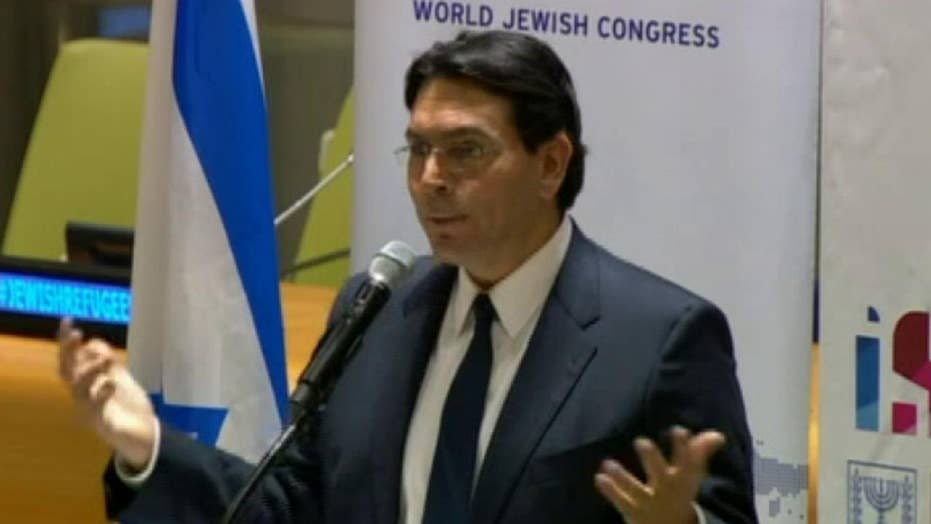 Israel's ambassador to the UN speaks at event commemorating Jewish refugees from North Africa and the Middle East.

During an event commemorating Jewish refugees from North Africa and the Middle East on Wednesday in New York, Israel's Ambassador to the United Nations Danny Danon said the U.N. often fights for Palestinian refugees, but forgets about Jewish refugees.

Speaking at the event held at the U.N. headquarters in New York City, Danon said, "Although the Jewish refugees did not forget their heritage and how they were forced out of their homes, unfortunately, the international community did.”

“Every time the U.N. talks about the refugees of Israel’s war of independence, they speak only of the Palestinian refugees. The fact is there were two populations of refugees, and we must not allow that fact to be forgotten. Not only because we must honor those who lived through it, but because we must learn from it," he added.

Wednesday’s event -- which was attended by ambassadors from around the world, U.N. officials and members of the community -- was held one day after the annual U.N. General Assembly plenary session that commemorates the passage of the U.N. Partition Plan for Palestine, Resolution 181, on Nov. 29, 1947. The Partition Plan for Palestine recommended a partition of Palestine at the end of the British Mandate, essentially establishing two states.

The Jewish side accepted the U.N. plan for the establishment of two states, according to the Israel Ministry of Foreign Affairs, which said Arabs rejected it and launched a war of annihilation against the Jewish state.

The U.N. General Assembly plenary session that commemorates the passage of the U.N. Partition Plan for Palestine featured resolutions that highlight the Palestinian refugees, but ignored the Jewish refugees, according to an Israel Mission to the U.N. news release.

In Wednesday’s remarks, Danon said that this custom of "denying the rights of Jewish refugees" is an attempt "to erase them from the narrative and an anti-Semitic historic injustice."

In an attempt “to correct this,” the ambassador said he is going to propose a resolution "that will reaffirm the Jewish refugees' place in history and assure that their rights are recognized.”

“I can see no legitimate reason for any member state to oppose the resolution,” Danon said.

“The choice to commemorate the national day of remembering Jewish refugees forced out of Arab countries and Iran in the 20th century on the 30th of November is no coincidence," he said. "It is the day after the important resolution of November 29th where this institution recognized the importance of forming a Jewish state in Israel."

Danon said hostilities against the Jewish people followed the passage of Resolution 181 and the Jewish refugee crisis began.

"It was right after this announcement that pogroms and violence forced people to flee their homes,” Danon said. “The hate, the anti-Semitism expressed by countries had nothing to do with borders. The idea of a Jewish state in Israel was enough to reignite the simmering flame of anti-Semitism and have countries turn on their own citizens."

Danon said that in 1948, there were around 1 million Jews living in Arab countries and Iran and said that currently, there are only a few tens of thousands left.

He said that "in order to fight anti-Semitism, whether it be in Europe or anywhere else, it has to be acknowledged that anti-Zionism is anti-Semitism.”

Carr added, “Jew hatred is Jew hatred, whether it is focused on the Jew down the street or the Jew in the diaspora or the Jewish state.”

Sarah Idan, a former Miss Iraq whose citizenship was revoked after she posted a photo with Miss Israel, spoke at Wednesday’s event, as well.

"Sadly [a] 3,000-year chapter of Jewish life in Iraq, along with the larger Middle East and North Africa, came to an abrupt and traumatic end -- and much of this is the result of anti-Semitism," she said.

The Permanent Observer Mission of the State of Palestine to the United Nations in New York did not immediately respond to Fox News’ request for comment.