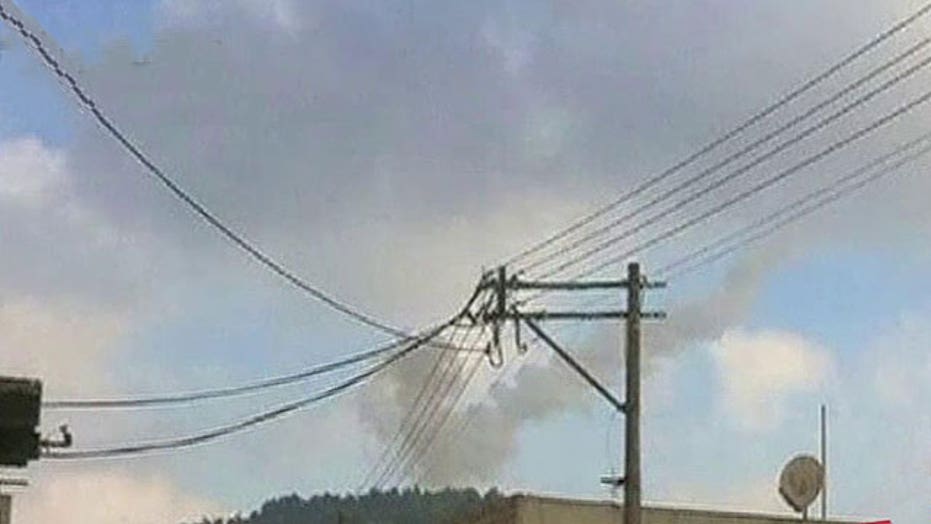 JERUSALEM – The Israeli military shot down a Syrian fighter jet that infiltrated its airspace over the Golan Heights on Tuesday morning -- the first such downing in decades, heightening tensions in the volatile plateau.

The military said a "Syrian aircraft infiltrated into Israeli air space" in the morning hours and that the military "intercepted the aircraft in mid-flight, using the Patriot air defense system."

The military would not say what type of aircraft was downed and said the circumstances of the incident were "unclear."

A defense official identified the downed aircraft as a Sukhoi Su-24 Russian fighter plane. Perviously, it was reported to have been a MiG aircraft. He said the Syrian jet penetrated 2,600 feet into Israeli air space and tried to return to Syria after the Patriot missile was fired.

The crew managed to abandon the plane in time and landed in Syrian territory, the Israeli official said.

It was the first such incident since the war with Lebanon in 1982, the official said. He spoke on condition of anonymity because he was not authorized to speak to the media.

Israel has largely stayed on the sidelines of Syria's civil war raging across the border. But Israeli leaders appear increasingly nervous about the possibility of Al Qaeda-linked fighters occupying the Golan's high ground over northern Israel.

Defense Minister Moshe Yaalon said the aircraft had crossed into Israel in a "threatening way" and vowed to retaliate to any similar attempts in the future.

"We will not allow element, whether it is a terror group or a state, to threaten our security and breach our sovereignty," he said. "We are committed first and foremost to ensure the security of the Israel's citizens and we will use all means at our disposal to do so," he said.

Israel has avoided taking sides in the three-year civil war in Syria, though Israeli troops have responded to occasional mortar fire that has landed on the Israeli side of the Golan. Israel says some of the attacks have been accidental spillover, while others have been intentionally aimed at Israeli civilians and soldiers. It has always held Syria responsible for any cross-border fire.

Israel and Syria are bitter enemies who have fought several wars.

Israel captured the Golan Heights from Syria in the 1967 Middle East war and later annexed the strategic area in a move that has never been internationally recognized.

While relations are hostile, the ruling Assad family in Syria has kept the border area with Israel quiet for most of the past 40 years. Israel is concerned that Assad's ouster could push the country into the hands of Islamic State extremists or other Al Qaeda-linked militants, or plunge the region further into sectarian warfare.

The Syrian government confirmed that Israel shot down one of its planes.

In August, Israel shot down a drone that had entered its side of the Golan Heights from Syria.