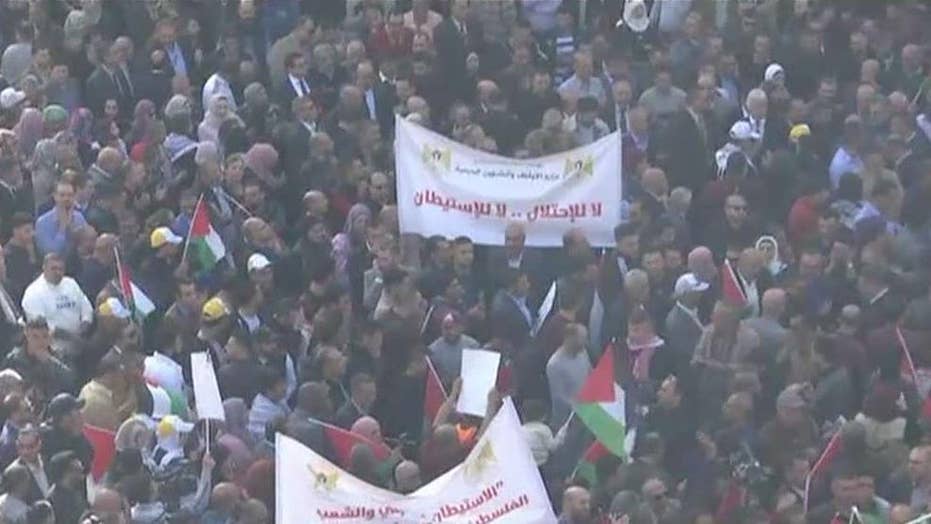 Palestinians protest in 'day of rage' against US and Israel; new rocket fire from Gaza into Israel

The Israeli military said two rockets were fired from the Gaza Strip at southern Israel on Tuesday in the second attack in one week, rattling the shaky cease-fire brokered earlier this month that ended two straight days of fighting with Palestinian militants.

The Israel Defense Forces (IDF) tweeted on Tuesday that “2 rockets were just fired from #Gaza at Israeli civilians. 1 rocket was intercepted by the Iron Dome Aerial Defense System.”

The second projectile appeared to strike an open field in southern Israel, The Times of Israel reported.

No injuries or damage was caused by the rockets, though one woman suffered minor injuries when she fell while running to a bomb shelter, the news outlet reported.

In a later tweet on Tuesday the IDF wrote, “In response to the rockets fired from Gaza at Israeli civilians earlier tonight, our fighter jets just struck a number of Hamas terror targets in #Gaza. Hamas will bear the consequences for actions against Israeli civilians.”

It was not immediately known if any injuries were reported.

Shortly before the strikes began, Israel’s Prime Minister Benjamin Netanyahu warned terror groups in Gaza that they made a “serious mistake” by firing the two rockets at Israel on Tuesday night.

“We will respond firmly to any attack against us and continue to maintain Israel's security on all fronts,” Netanyahu tweeted on Tuesday.

Tuesday's attack came one day after the IDF announced that a rocket was launched from the Palestinian enclave at southern Israel less than two weeks after Egypt and the United Nations brokered an unofficial truce that halted hostilities with Palestinian militants.

The Israeli military tweeted on Monday, “Nine days of calm between Israel and Gaza were just broken when a projectile was fired from #Gaza at #Israel. Thankfully, it landed in an open area.”

Earlier this month, Israel killed a senior Islamic Jihad militant in the Gaza Strip, sparking two consecutive days of violence. The militant group launched hundreds of rockets at Israel in response to the death of a senior commander of the terror group, Baha Abu al-Ata.

The IDF said al-Ata was responsible for a number of recent rocket attacks on southern Israel and claimed he was actively planning new attacks.

On the second day of violence, the Israeli military said it was “raining rockets” across the country, with Islamic Jihad firing one projectile every seven minutes.

The IDF said 90 percent of the rockets were intercepted by the Iron Dome, which a military spokesman said is a “unique Israeli system developed together with the American defense industry that has the capacity to intercept rockets in flight and to blow them up in the sky to make sure that Israeli civilians are safe and out of harm’s way.”

A ball of fire from an Israeli interception missile from the Iron Dome defence system, is seen in the sky above the southern Israeli city of Ashkelon on November 13, 2019, as it intercepts an incoming short-range rocket launched from the Palestinian Gaza Strip. (Photo by GIL COHEN-MAGEN / AFP)

As a result, no Israeli deaths were reported. However, a few homes suffered direct hits and there was a near miss on a major highway, where a rocket crashed just after a vehicle passed. In all, three people suffered small wounds from shrapnel or shattered glass caused by rocket fire, according to medical officials.

Unofficial cease-fires have led to months of calm between Israel and the Islamic militant group Hamas, which rules Gaza.

Palestinian demonstrator throws back tear gas fired by Israeli troops during the protest against the U.S. announcement that it no longer believes Israeli settlements violate international law., at checkpoint Beit El near the West Bank city of Ramallah, Tuesday, Nov. 26, 2019. (AP Photo/Majdi Mohammed)

Tuesday’s attack from Gaza came after thousands of Palestinian demonstrators took part in a "day of rage" across the West Bank on Tuesday, protesting last week’s announcement that the U.S. no longer believes that Israeli settlements violate international law.