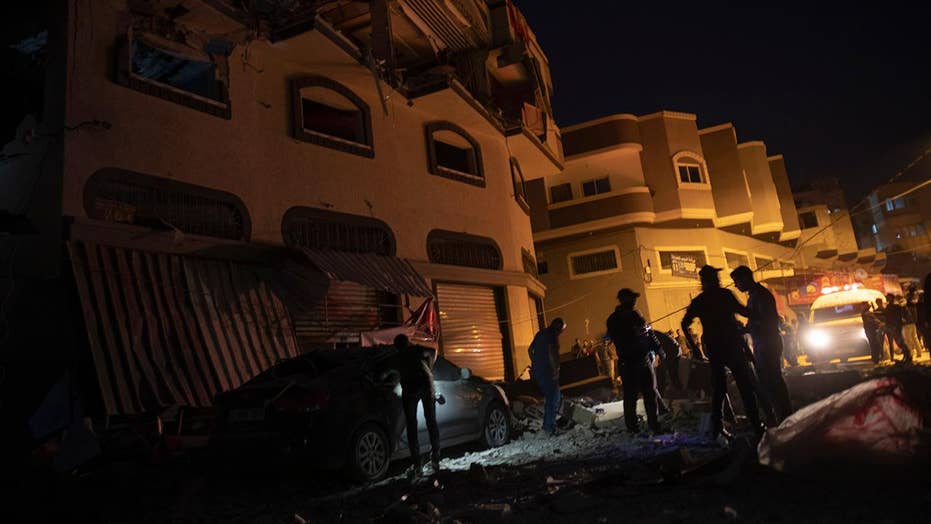 Uneasy cease-fire appears to be holding in Gaza

Despite sporadic rocket fire, the region is starting to transition back to normal; Trey Yingst reports from Gaza City.

Rockets continue to be launched from Gaza into southern Israel, hours after a cease-fire was declared between Israel and Gaza’s militant Islamic Jihad group early Thursday, according to Israel Defense Forces (IDF), which added that the Israeli military is responding by striking "terror" targets.

“We are currently striking Islamic Jihad terror targets in Gaza. This comes after rockets were indiscriminately fired from Gaza at Israeli civilians today,” the IDF tweeted shortly after the two rockets were fired.

Thursday night’s rockets were seen as the fourth Palestinian violation of the cease-fire agreement announced earlier in the day, The Times of Israel reported.

There were no reports of injuries or damage caused by shrapnel from the intercepted rockets, according to the news outlet.

The renewed rocket fire came as supporters of the militant group held sporadic protests around Gaza to express anger at the truce.

In separate tweets, the Israeli military said at least six more rockets have been fired into Israel from Gaza despite the cease-fire, adding that sirens continue to sound in southern Israel.

An IDF spokesman, Lt. Col. Jonathan Conricus, said the Iron Dome is a “unique Israeli system developed together with the American defense industry that has the capacity to intercept rockets in flight and to blow them up in the sky to make sure that Israeli civilians are safe."

After the latest attack, the southern city of Ashkelon reportedly announced it was canceling school for Friday, following the lead of the Israeli communities closest to the Gaza border that did the same earlier in the evening.

A fragile truce appeared to hold Thursday despite the rocket attacks until the latest round.  Israel had initially refrained from striking Gaza despite growing public pressure to take action, according to The Times of Israel.

The Egypt-brokered cease-fire was meant to halt a 48-hour surge in cross-border fighting sparked by the assassination of top Islamic Jihad leader Baha Abu al-Ata and his wife.

"Baha Abu Al Ata was the senior commander of Islamic Jihad in Gaza, responsible for most attacks emanating from Gaza over the last year," IDF Chief of General Staff Lt. Gen. Aviv Kohavi said Tuesday. "He was a ticking time-bomb. ... There was a window of opportunity that we utilized precisely."

“The IDF operated decisively and precisely against Islamic Jihad in Gaza until quiet returned to the skies above Israel,” The Israeli military tweeted shortly after the announcement of a cease-fire. “Quiet will be met with quiet. We will continue to protect the people of Israel and are prepared for any threat on all fronts.”

IDF provided an official operation recap for the 48 hours of violence on Thursday saying more than 450 rockets were fired by the Islamic Jihad, 90 percent intercepted by the Iron Dome, while some 25 Islamic Jihad “terrorists” have been “eliminated.”

Conricus said there were “no significant Israeli casualties,” in large part thanks to the Iron Dome.

On Thursday, Israeli Prime Minister Benjamin Netanyahu toured an Iron Dome command center and tweeted a photo and caption: “On behalf of all Israeli citizens -- many thanks to the warriors and the Iron Dome Battery fighters.”

While touring, Netanyahu reportedly said Israel had sent a deterrent message to “our enemies” before the cease-fire was reached.

Although no Israeli deaths were reported, a few homes suffered direct hits and there was a near-miss on a major highway, where a rocket crashed just after a vehicle passed. A handful of light to moderate injuries and significant property damage was reported in Israel. Dozens of people were hurt stumbling as they ran to bomb shelters.

An explosion caused by Israeli airstrikes is seen in Gaza City early Thursday. Israeli aircraft struck Islamic Jihad targets throughout the Gaza Strip on Wednesday while the militant group rained scores of rockets into Israel for a second straight day as the heaviest round of fighting in months showed no signs of ending.  (AP Photo/Adel Hana)

At least 34 Palestinians, including three women and six children, have been killed in the two-day barrage.

The Israeli military is defending its attacks on private homes in the Gaza Strip during the two days of fighting, despite the deaths of at least nine civilians.

Eight members of a single family were killed in one airstrike. Conricus said he doesn't have information on that incident but that militants used their families as human shields. 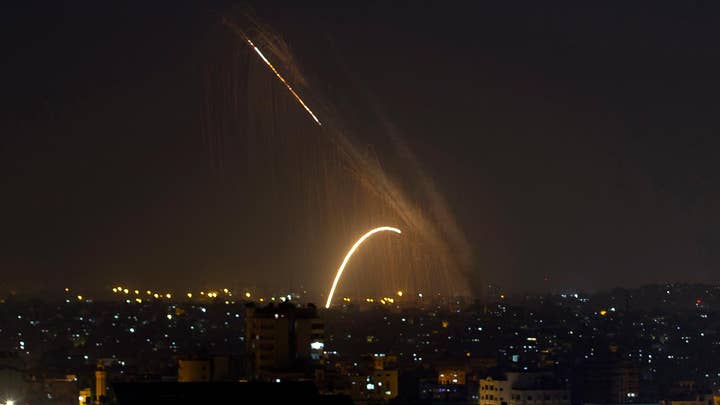 "All of our operations were measured, proportionate and focused only on military assets belonging to the Islamic Jihad,"Conricus said.

Islamic Jihad spokesman Musab al-Berim said the cease-fire, which went into effect early Thursday morning, was based on a list of demands presented by his group late Wednesday, including a halt to Israeli targeted killings of the group's leaders.

Israel's foreign minister Israel Katz said his country intends to continue its policy of targeting Gaza militants with deadly strikes -- a warning that came just a few hours after the cease-fire was declared.

"Israel will harm anyone who tries to harm it," Katz told Israeli Army Radio on Thursday.

Hamas, the Islamic militant group ruling Gaza, seemed to have stayed out of the fighting.