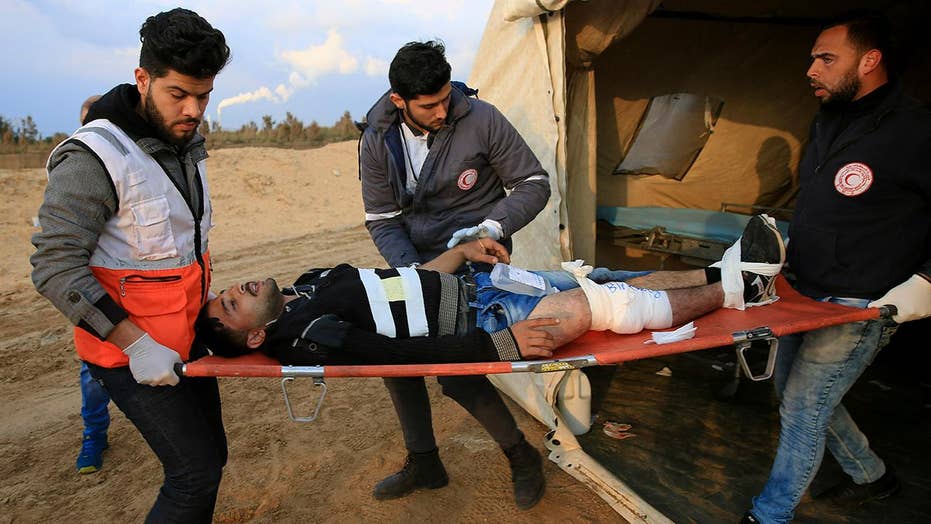 Thousands of Palestinians gather along the border with Israel, throwing IEDs and grenades at Israeli sharpshooters; Trey Yingst reports from the scene.

The United Nations Human Rights Council has once again taken Israel to task over its reaction to guarding its Gaza border against the continuous threat of infiltration and attack by Palestinian protesters.

The report, known as a commission of inquiry, issued earlier Thursday was set up by the U.N.H.R.C. to look into the protests along the Gaza border that began last March. It based its information on the protests through December of 2018 and looked into Israel’s response to the protests and its impact on civilians in Gaza and Israel.

Senior Hamas official says the militant group remains prepared for a war with Israel and gets support for their efforts from organizations and countries around the world; Trey Yingst reports from Jerusalem.

Known as the “great march of return,” thousands of protesters have gathered every Friday since March 2018 along the Israeli/Gaza border in what the Israelis say is violent attempt to enter Israel illegally and cause harm to its civilians. The aim of the march is for the return of Palestinian refugees from Gaza into Israel. The gatherings have been far from peaceful and have resulted in the deaths of many.

Danny Danon, Israel's ambassador to the U.N., said of the findings: “The countries of the world should consider their membership in the Human Rights Council, which supports a murderous terrorist organization.

"This council is blinded by hatred of Israel and the Israel Defense Forces, and wastes its resources and time in political attacks and spreading lies.”

He added: “The report ignores the only truth: that IDF soldiers acted morally to protect Israeli citizens while Hamas sent children to the fence and used them as human shields."

A wounded Palestinian protester is taken away during clashes with Israeli forces on May 4, 2018 in Khan Yunis, Gaza.  (Getty)

Israel’s Foreign Minister Yisrael Katz also rejected and condemned the report in a statement that read in part, “The Human Rights Council’s Theatre of the Absurd has once again produced a report that is hostile, mendacious and biased against Israel.”

Katz claimed the report was based on distorted data free of fact-checking.

The Human Rights Council voted for the report’s establishment last year. Its members at the time included the likes of Venezuela, Cuba, China, Pakistan, Saudi Arabia and Qatar. The U.S. withdrew from the body last June when former U.N. Ambassador Nikki Haley called it “a protector of human rights abusers, and a cesspool of political bias.”

The commission stated that it investigated all 189 fatalities and tracked over 300 injuries from March to December of last year and claimed all were caused by Israeli security forces.

A tear gas canister falls near a Palestinian at the border fence with Israel as mass demonstrations continue on May 14, 2018 in Gaza City, Gaza. (Getty)

The commission of inquiry also stated that Israeli security forces “killed and maimed demonstrators who did not pose an imminent threat of death or serious injury to others…nor were they directly participating in hostilities.”

In its recommendations, it called for the U.N. High Commissioner for Human Rights to provide information on “alleged perpetrators” to national and international justice mechanisms and include the International Criminal Court who might undertake “independent investigations into alleged international crimes and violations.

It further stated that U.N. members might consider individual sanctions such as travel bans and for countries who are party to certain conventions such as the Geneva convention “carry out their duty to exercise criminal jurisdiction and arrest persons alleged to have committed, or who ordered to have committed, the international crimes described in the present report, and either to try or to extradite them.”

While the commission does point some criticism at the Palestinians the majority of it takes aim at Israel.

NGO Monitor, a globally recognized research institute promoting democratic values and good governance, questioned the independence and criticized the methodology of the report. In one such example, NGO Monitor says it fails to include a quote from the spokesman of Hamas from one of the bloodiest protests last May. He said that 50 of the 62 deaths on that one day were “Martyrs,” from Hamas. Another terror group, Palestinian Islamic Jihad, also claimed several of the dead were from its membership.

Anne Herzberg, NGO Monitor's Legal Advisor and UN Liasion, told Fox News that the council had “issued yet another absurd report whitewashing Hamas terrorism while condemning Israel for protecting its citizens. It is laughable that the UN treats cross-border violence as the same as a domestic policing situation.”

Herzberg continued: “None of this is surprising given the UN relied overwhelmingly on information provided by Hamas and terror-linked NGOs, and uncritically adopted their false claims. The Commission itself had no military or legal expertise, and was completely unqualified to author this report.”