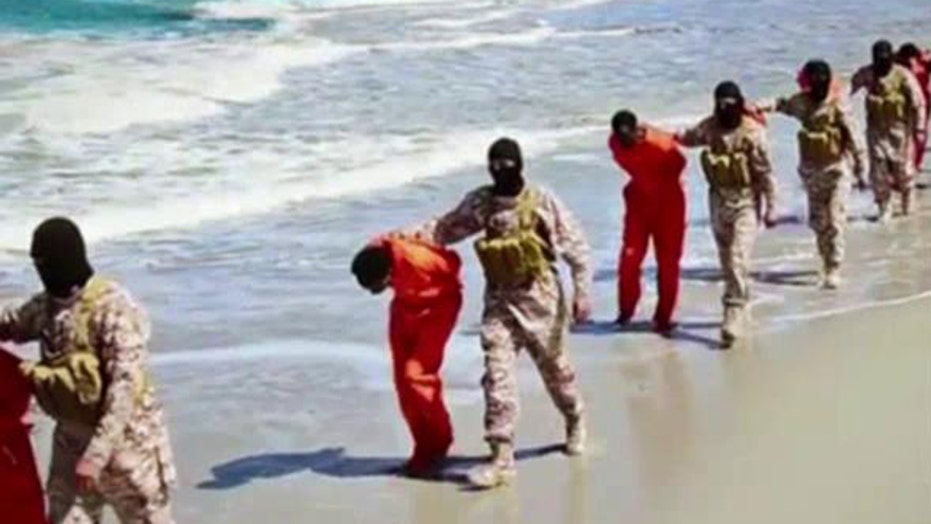 Ethiopian Christians murdered in video condemned by the White House

The Islamic State expanded its extermination of Christians to another country with the release of a video Sunday purportedly showing a mass execution of Ethiopians in Libya.

"We express our condolences to the families of the victims and our support to the Ethiopian government and people as they grieve for their fellow citizens," National Security Council spokesperson Bernadette Meehan said in a statement. "That these terrorists killed these men solely because of their faith lays bare the terrorists' vicious, senseless brutality."

The White House on Sunday evening condemned the video.

The video, released via militant social media accounts and websites, including the Middle East Media Research Institute, could not be independently verified by The Associated Press. However, it corresponded to other videos released by the Islamic State group and bore the symbol of its al-Furqan media arm.

At this time, the U.S. intelligence community is assessing the video and has no reason to doubt its authenticity, sources told Fox News.

In the video, Islamic State militants in Libya shot and beheaded groups of captive Ethiopian Christians.

Ethiopia on Monday declared three days of mourning beginning Tuesday, when lawmakers will meet to discuss the killings and consider the country's possible response, the government said in a statement.

The release of the 29-minute video came a day after Afghanistan's president blamed the extremists for a suicide attack in his country that killed at least 35 people -- and underscores the chaos gripping Libya after its 2011 civil war and the killing of dictator Muammar Qaddafi.

It also mirrored a film released in February showing militants beheading 21 captured Egyptian Christians on a Libyan beach, which immediately drew Egyptian airstrikes on the group's suspected positions in Libya. Whether Ethiopia would -- or could -- respond with similar military force remains unclear.

Ethiopia long has drawn the anger of Islamic extremists over its military's attacks on neighboring Somalia, whose population is almost entirely Muslim. While the militant in the video at one point said "Muslim blood that was shed under the hands of your religion is not cheap," it did not specifically mention the Ethiopian government's actions.

The video starts with what it called a history of Christian-Muslim relations, followed by scenes of militants destroying churches, graves and icons. A masked fighter brandishing a pistol delivers a long statement, saying Christians must convert to Islam or pay a special tax prescribed by the Koran.

It shows one group of captives, identified as Ethiopian Christians, purportedly held by an Islamic State affiliate in eastern Libya known as Barqa Province. It also shows another purportedly held by an affiliate in the southern Libyan calling itself the Fazzan Province. The video then switches between footage of the captives in the south being shot dead and the captives in the east being beheaded on a beach. It was not immediately possible to estimate how many captives were killed or confirm their identities.

In Ethiopia, government spokesman Redwan Hussein said officials were in contact with its embassy in Cairo to verify the video's authenticity. Hussein said he believed those killed likely were Ethiopian migrants hoping to reach Europe. Libya has become a hub for migrants across Africa hoping to cross the Mediterranean to enter Europe for work and better lives.

"If this is confirmed, it will be a warning to people who wish to risk and travel to Europe though the dangerous route," Hussein said.

"I believe this is just another case of the IS group killing Christians in the name of Islam. Our fellow citizens have just been killed on a faith-based violence that is totally unacceptable. This is outrageous," Mulugeta said. "No religion orders the killing of other people, even people from another religion."

Ethiopia's options to retaliate remain slim, given its distance from Libya. However, Egyptian Ambassador to Ethiopia Mohammed Edrees said his country could partner with Addis Ababa to strike the militants.

"That could be an option," Edrees told the AP. "We will see and explore what is possible to deal with group."

Edrees said Ethiopian officials had yet to approach Egypt to discuss the idea.

After the February killings of the Coptic Christians, Egypt's military responded with airstrikes targeting the militant stronghold of Darna. It has not launched further strikes, though its president is trying to form a pan-Arab military force to respond to extremist threats in the region.

The Islamic State, which grew out of Al Qaeda's former Iraqi affiliate, now holds about a third of Iraq and Syria in its self-declared caliphate. It's called on Muslims across the world to join it. Its online videos and propaganda, including scenes of its mass killings and beheadings, have caught the attention of many extremists

Its influence has grown since it seized large areas of Iraq last summer. Insurgents in Egypt's strategic Sinai Peninsula also have pledged to the group, while another purported affiliate in Yemen claimed a series of suicide bombings in March that killed at least 137 people. On Saturday, Afghan President Ashraf Ghani blamed an affiliate in his country for an attack on a bank branch in the country's east that killed 35 people and wounded 125. An affiliate also operates in Pakistan.

However, it remains unclear what kind of central command-and-control structure the Islamic State group operates.

"The Islamic State in Libya is still focused on this consolidation phase of announcing its presence through these very high-profile executions," said Frederic Wehrey, a senior associate for the Middle East Program at the Carnegie Endowment for International Peace. "But they face some structural limits in terms of how much local support they can get because they haven't captured real revenue streams."

Meanwhile Sunday, the U.S.-led coalition said Kurdish forces recaptured 11 villages in Iraq's Kirkuk province from the Islamic State group following days of intense clashes. The coalition said the area of about 25 square miles was south of the city of Kirkuk.

The coalition also said Sunday that Iraqi forces had full control over the country's Beiji oil refinery, the nation's largest. Islamic State group fighters had been targeting it for days in attacks and briefly held a small portion of the sprawling complex.

In Anbar province, the extremists recently captured three villages near the city of Ramadi and remain locked in heavy clashes with Iraqi troops. More than 90,000 people have fled the militant's advance there, a United Nations humanitarian agency said.

"Our top priority is delivering life-saving assistance to people who are fleeing -- food, water and shelter are highest on the list of priorities," said Lise Grande, the U.N. humanitarian coordinator for Iraq. "Seeing people carrying what little they can and rushing for safety is heart-breaking."

Iraqi troops backed by Shiite militias and U.S.-led airstrikes managed to dislodge the Islamic State group from the northern city of Tikrit earlier this month. But the troops have struggled against the militants in Anbar, which saw some of the heaviest fighting of the eight-year U.S. military occupation that ended in 2011.