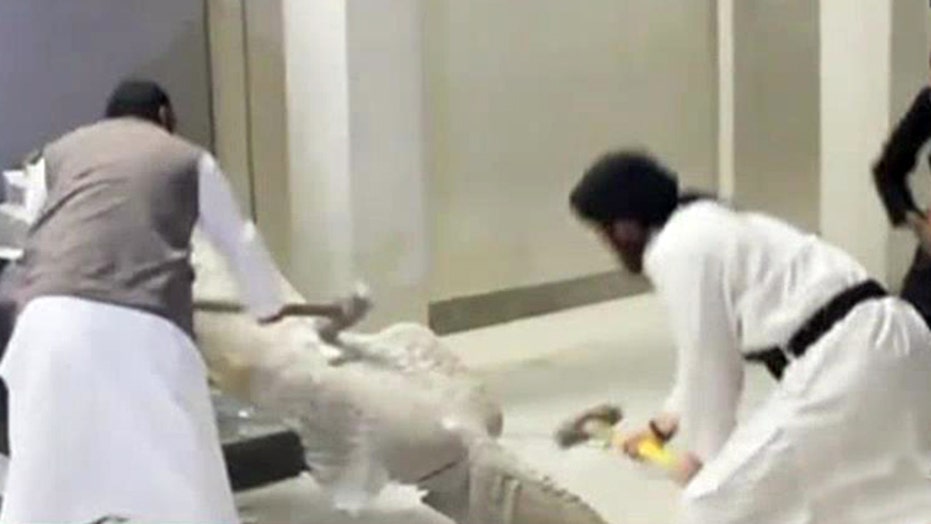 Terrorists take sledgehammers to priceless relics in city of Mosul

The Iraqi government claimed Thursday that ISIS militants had "bulldozed" the renowned Nimrud archaeological site in the north of the country.

The country's Ministry of Tourism and Antiquities said in a statement posted on its Facebook page that the terror group continues to "defy the will of the world and the feelings of humanity". The statement did not elaborate on the extent of the damage to the site.

Axel Plathe, the director of UNESCO's Iraq office, tweeted that the attack was an "appalling attack on Iraq's heritage", while Iraqi archaeologist Lamia al-Gailani told the BBC that ISIS was "erasing our history."

The government's claim came days after a video released by ISIS showed militants using sledgehammers to smash ancient artifacts kept in a museum in Iraq's northern city of Mosul. Statements made by men in the video described the treasures as symbols of idolatry that should be destroyed.

Nimrud was the second capital of Assyria, an ancient kingdom that began in about 900 B.C., partially in present-day Iraq, and became a great regional power. The city, which was destroyed in 612 B.C., is located on the Tigris River just south of Iraq's second largest city, Mosul, which was captured by the Islamic State group in June.

The late 1980s discovery of treasures in Nimrud's royal tombs was one of the 20th century's most significant archaeological finds. After Iraq was invaded in 2003, archaeologists were relieved when they were found hidden in the country's central Bank — in a secret vault-inside-a-vault submerged in sewage water.

Suzanne Bott, the heritage conservation project director for Iraq and Afghanistan in the University of Arizona's College of Architecture, Planning and Archaeology, worked at Nimrud on and off for two years between 2008 and 2010. She helped stabilize structures and survey Nimrud for the U.S. State Department as part of a joint U.S. military and civilian unit.

She described Nimrud as one of four main Assyrian capital cities that practiced medicine, astrology, agriculture, trade and commerce, and had some of the earliest writings.

"It's really called the cradle of Western civilization, that's why this particular loss is so devastating," Bott said. "What was left on site was stunning in the information it was able to convey about ancient life.

"People have compared it to King Tut's tomb," she said.

Iraq's national museum in Baghdad opened its doors to the public last week for the first time in 12 years in a move Prime Minister Haider al-Abadi said was to defy efforts "to destroy the heritage of mankind and Iraq's civilization."

ISIS has imposed a harsh and violent version of Islamic law in the territories it controls and has terrorized religious minorities. It has released gruesome videos online showing the beheading of captives, including captured Western journalists and aid workers.

A U.S.-led coalition has been striking the group since August, and Iraqi forces launched an offensive this week to try to retake the militant-held city of Tikrit, on the main road linking Baghdad to Mosul.

Jack Green, chief curator of the Oriental Institute Museum at the University of Chicago and expert on Iraqi art, said Thursday that ISIS seems bent on destroying objects they view as idols representing religions and cultures that don't conform to their beliefs.

"It's the deliberate destruction of a heritage and its images, intended to erase history and the identity of the people of Iraq, whether in the past or the present," Green said. "And it has a major impact on the heritage of the region."

Green noted that in many of these attacks on art, pieces that can be carried away are then sold to fund the IS group, while the larger artifacts and sculptures are destroyed at the site.