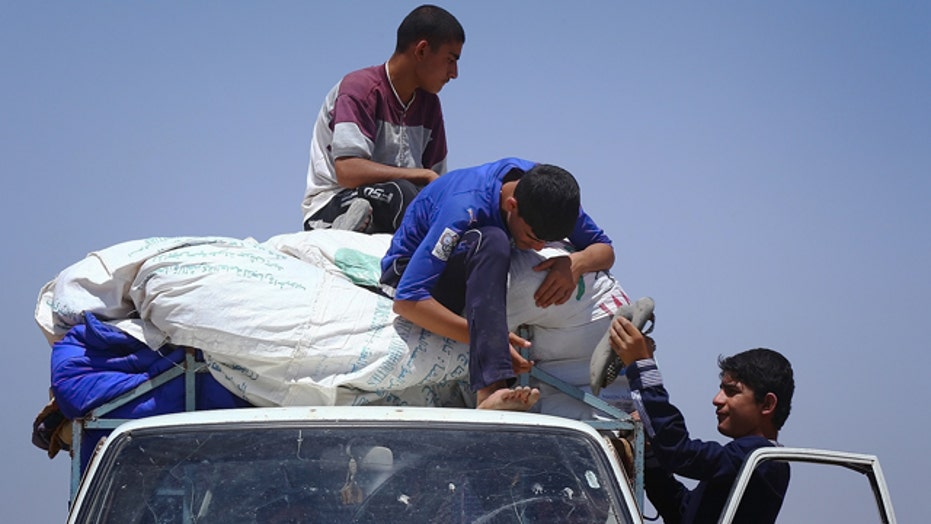 Too late to stem tide of ISIS advance in Iraq?

For 10 years, members of Saddam Hussein's Baathist party -- including many of the dead dictator's top generals -- have hidden in the shadows of Iraq, persecuted by government in Baghdad and plotting, praying and preparing for the chance to reclaim their country.

Now they are back, paired in a bloodthirsty alliance with the brutal jihadis of the Islamic States of Iraq and Syria/Levant. These vicious Islamic radicals fighting alongside top officials from Hussein's dictatorship, are working to seize control of the battle-scarred nation. For now, their objectives converge.

"[We are] unified by the same goal, which is getting rid of this sectarian government, ending this corrupt army and negotiating to form a Sunni Region,” a senior Baathist leader told FoxNews.com.

After the invasion of Iraq, thousands of Baathist’s lost their jobs: teachers, doctors, professors, soldiers. Banished from holding any public-sector positions, many found themselves unable to support and feed their families, and their anger grew. This purge is considered one of the major blunders of the invasion, and although it was partly overturned in 2008, the damage had been done.

For a decade, tensions in the Sunni regions simmered under these conditions, as Maliki’s Shia government sought retribution for decades of Saddam's brutal rule. Many who once were part of the regime found it hard to put food on the table, their anger building as their communities suffered. That the Maliki government continues to shell rebel held cities today, despite the fact many within are innocent civilians, further isolates Sunni communities and pushes them into the sphere of Sunni rebels.

Ultimately it was the failure of Maliki’s government to reach out to these elements that created the ISIS alliance in Iraq. It has drawn comparisons to Syria, where ISIS forces joined with the Free Syrian Army with the intention of toppling Bashar al-Assad's regime; but in Syria the alliance imploded. The patriotic group fighting to liberate Syria, eventually faced off against the violent jihadists seeking to carve out an extreme fundamentalist state, and today they are at war.

Much has been written about ISIS's blitzkrieg across northern Iraq, but it is unlikely the fighters would have been as successful without the Baathists. Three of Saddam's former generals led the takeover of Mosul, and eight of the top 10 generals in the ISIS army are believed to be Baathists. Izzat Douri, a former military commander who Saddam considered to be like a brother, is widely rumored to be in Mosul, overseeing the conflict after hiding out in Qatar and Syria for a decade.

In addition to their military training, the Baathists have been able to tap strong tribal ties in the region to command countless followers. That's helped to keep the conquered territory in ISIS hands while the army of terrorists and freed soldiers moves forward toward the prize: Baghdad and the holy Shia cities of Karbala and Najaf.

“As an effective fighting force alone, ISIS would never have been able to hold such large territories, a Kurdish intelligence officer told FoxNews.com but with the help of Baathists [united under the banner of the Naqshbandi army], they have been able to keep the momentum going.”

The ISIS fighters, their ranks swollen with foreign jihadists hardened from conflicts in Syria, Chechnya, Afghanistan and others locations, lead the charge. Under the direction of former Iraqi generals and the ISIS leader Al-Baghdadi, they rely on the strong network of Sunni tribes and Baathists behind them, many nostalgic for the security of Saddam's era.

Hussein's image has again become popular in the north and west, and soldiers call out “Father, father,” while they watch video tributes to him. His image is found in many a home from Fallujah to Mosul. The Kurdish judge who sentenced Hussein to death in 2006, Raouf Abdul Rahman, was reportedly captured and executed on Sunday, although his death cannot yet be confirmed.

And this remains a family cause. Raghad Hussein, who now lives in Jordan, gave an interview a few days ago.

“I am happy to see all these victories,” she said. “Someday, I will return to Iraq and visit my father’s grave. Maybe it won’t happen very soon, but it will certainly happen.”

In the meantime she has been indicted by Interpol, for “inciting terrorism in Iraq.”

The alliance between ISIS and the Baathists may be their greatest strength at the moment, but the rifts are growing. In the last week, there have been internal clashes, as the more moderate Sunni fighters struggle with the brutality of ISIS. Many within the Baathist party are unsure they can control ISIS, and fear that once they have secured territory, they will try to impose strict Sharia law on towns under Baathist rule.

In a petty rift, ISIS troops fought Naqshbandi soldiers over an armored vehicle, with five men killed. In another battle on Sunday, 17 fighters were killed as the groups clashed again. As one Sunni fighters put it "unlike ISIS, we are not playing football with people's heads"

With the U.S. already considering the strange prospect of working with Iran to curb the ISIS advance, it is possible that down the road, America's allies could be the very Baathists and Sunni fighters it once ousted from power.