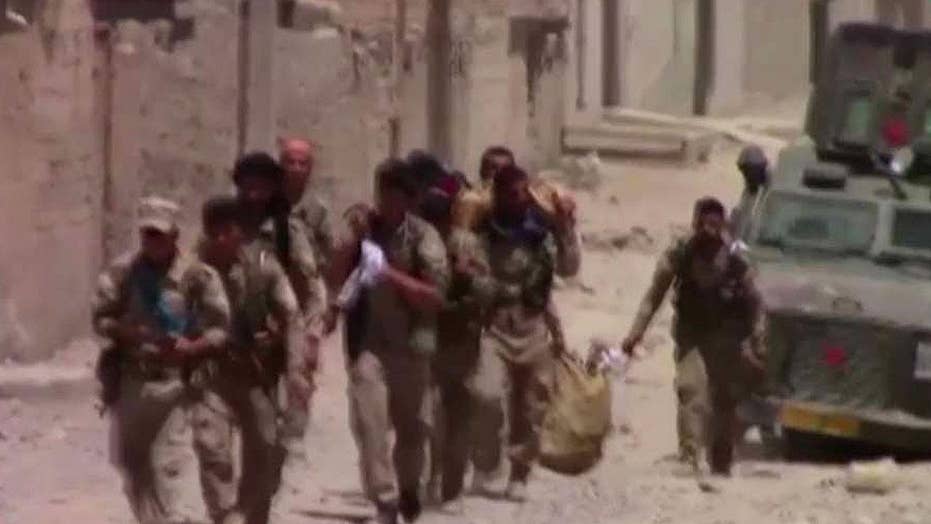 U.S.-backed Syrian fighters have captured almost half of Raqqa from ISIS, moving closer to liberating the city once deemed the capital of the terror group's so-called "caliphate" -- but the Islamist network still has the ability to launch and inspire attacks against Western targets worldwide.

The capture of Raqqa would be a huge loss for ISIS, both in a symbolic and territorial sense, after the group earlier this month lost the Iraqi city of Mosul. But the total liberation of Raqqa is still far off despite the progress.

Despite losses of its Syrian and Iraqi territory, ISIS has claimed responsibility for at least five attacks this year in France, the U.K. and Australia that resulted in at least 40 deaths and 161 injuries – in addition to a large number of attacks in the Middle East and a more pronounced presence in Asia.

A U.S.-backed Syrian Democratic Forces fighter looks through a hole on the front line of the industrial district on the eastern side of Raqqa. (AP)

Nisreen Abdullah, the Kurdish spokeswoman, told The Associated Press that the pace of the advance into Raqqa has slowed because of massive amounts of explosives laid by ISIS fighters. As the extremists have become surrounded, they've increased their suicide attacks against fighters of the SDF, she added.

"Raqqa has become a booby trapped city and this shows their weakness," Abdullah, of the Women's Protection Units, said, speaking from northern Syria. "They are also using civilians as human shields and this is slowing the push as well."

She said fighters of the Syrian Democratic Forces now controls 45 percent of Raqqa.

U.S. soldier, foreground, walk in front of Syrian children in the background, at a road that links to Raqqa, northeat Syria, July 26, 2017. (AP)

In the eastern front, where SDF forces breached ISIS defenses on the edge of the old city about a month ago, fighters have now reached the old citadel, an SDF commander in charge of one sector in the front told the AP.

The Britain-based Syrian Observatory for Human Rights also said SDF fighters control half of Raqqa, where tens of thousands of civilians are still trapped.