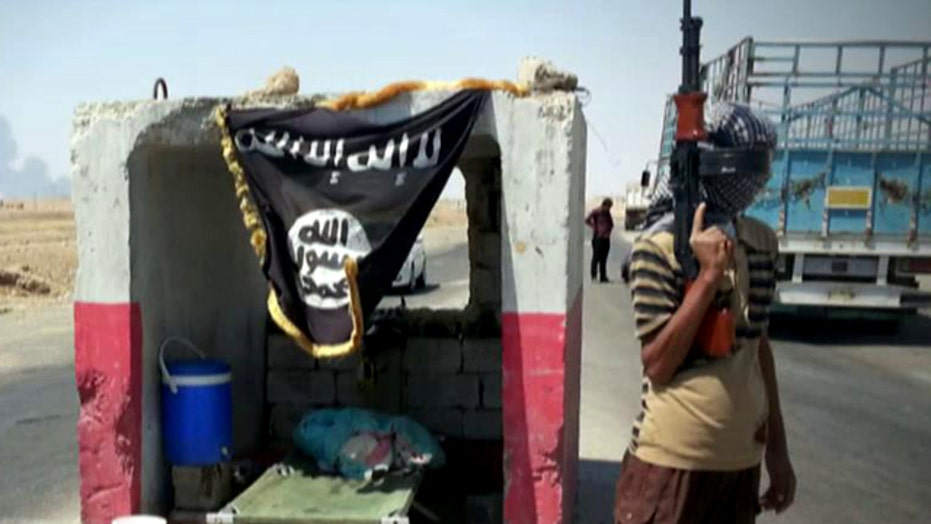 Rep. Kinzinger on impact of alliance on Obama's strategy in Syria

ISTANBUL – The two most brutal terror groups in Syria reportedly have struck an alliance, in a deal that poses serious problems for the Obama administration’s efforts to prop up “moderate” rebel factions in the country.

The Associated Press reported Thursday that militant leaders from the Islamic State and Al Qaeda’s Syria affiliate, the Nusra Front, agreed during a meeting in northern Syria last week to stop fighting each other.

Such an accord could present new difficulties for Washington's strategy against the Islamic State. While warplanes from a U.S.-led coalition strike militants from the air, the Obama administration has counted on arming "moderate" rebels to push them back on the ground.

Those rebels, already considered relatively weak and disorganized, would face far stronger opposition if the two heavy-hitting militant groups now are working together. One official claimed the Islamic State and Nusra already have agreed to work toward destroying one prominent, U.S.-backed rebel group.

The Islamic State, which also operates in Iraq where U.S. troops already are stationed, had fought with the Nusra Front for more than a year to dominate the rebellion against Syrian President Bashar Assad.

Their new agreement, according to the sources in rebel groups opposed to both, would involve a promise to stop fighting and team up in attacks in some areas of northern Syria.

The developments came as the top two U.S. military officials testified on Capitol Hill about the status of the Islamic State fight in both Iraq and Syria. Defense Secretary Chuck Hagel, responding to some concerns about the progress of the war, said there is “no change in strategy.”

But he and Gen. Martin Dempsey, the chairman of the Joint Chiefs of Staff, delivered a cautious assessment of the progress in the three-month-old war against Islamic extremists.

And Dempsey said an effort to move into Mosul, an area in Iraq now held by ISIS militants, or to restore the border with Syria would require more complex operations. He suggested this could involve U.S. forces.

"I'm not predicting at this point that I would recommend that those forces in Mosul and along the border would need to be accompanied by U.S. forces, but we're certainly considering it," Dempsey told the House Armed Services Committee.

Meanwhile, a U.S. official with access to intelligence about Syria told the Associated Press the American intelligence community has not seen any indications of a shift in the strategy by ISIS and the Nusra Front, but added that he could not rule out tactical deals on the ground.

A second source, a commander of brigades affiliated with the Western-backed Free Syrian Army who is known as Abu Musafer, said he also had learned that high-ranking members of Nusra and ISIS met on Nov. 2. He did not disclose the exact location, but said it was organized by a third party and took place in an area where the FSA is active.

According to Abu Musafer, two decisions were reached: First, to halt infighting between Nusra and ISIS and second, for the groups together to open up fronts against Kurdish fighters in a couple of new areas of northern Syria.

The Nusra Front has long been seen as one of the toughest factions trying to oust Assad in a civil war estimated to have killed more than 200,000 since 2011. The Islamic State group entered the Syria war in 2012 from its original home in Iraq and quickly earned a reputation for brutality and for trying to impose itself as the leading faction in the rebellion behind which all pious Muslims should unite. Al Qaeda initially rejected ISIS’ claims to any role in Syria, and Nusra and other factions entered a war-within-a-war against it. But the Islamic State group swelled in power and became flush with weapons and cash after overrunning much of northern and western Iraq over the summer.

According to the opposition official, the meeting included an ISIS representative, two emissaries from Nusra Front, and attendees from the Khorasan Group, a small but battle-hardened band of Al Qaeda veterans from Afghanistan and Pakistan.

The official said ISIS and the Nusra Front agreed to work to destroy the Syrian Revolutionaries Front, a prominent rebel faction armed and trained by the United States and led by a fighter named Jamal Maarouf. They agreed to keep fighting until all of the force, estimated to be 10,000 to 12,000 fighters, was eliminated, the official said.

During the meeting, ISIS also offered to send extra fighters to Nusra Front for an assault it launched last week on Western-backed rebels from the Hazm Movement near the town of Khan al-Sunbul in northern Syria, the official said. IS sent about 100 fighters in 22 pickup trucks but Nusra ended up not needing the assistance, he said, because Hazm decided not to engage in the fight. Sixty-five Hazm fighters defected to Nusra, he said.

Tom Joscelyn, an American analyst who tracks terror groups for the website Long War Journal, said he hasn't seen any messaging that would confirm that the two groups have formally joined forces on the battlefield. But he said there has been information emerging before the reported Nov. 2 meeting "that would seem to fit in with that being what they were driving at. There has been a big push on the al-Qaida side to get this (alliance) through."

If they work together, the jihadis will be more effective in Syria, he said. "If there is less blood being spilled against each other and they don't have to worry about that, that's going to make it easier for the jihadis to go after Assad or any Western-backed forces."